Attack the Block is a modern-day cult classic, and as star John Boyega (Finn from The Force Awakens) rises up the Hollywood ranks, this movie will certainly get some more attention in the near future.

Coming from the producers of Shaun of the Dead and writer/director Joe Cornish (writer on Ant Man), Attack the Block has an excellent horror/science-fiction/comedy pedigree. The film follows an inner-city street gang from London, led by Moses (John Boyega), who encounter alien invaders on Guy Fawkes Day and have to team up with one of their former mugging victims and a lovable stoner to fight off the alien attackers and defend the “block”. The “block” is a 19-story low-income housing building, and Attack the Block feels like The Raid, or Dredd (2012) as it takes place in one day, over a few hours, and primarily within one building. It is fast-paced, exciting, and with a runtime of just under 90 minutes, it is the perfect movie to just relax and enjoy some great sci-fi action without having to be too invested in the film.

Attack the Block features the film debut of John Boyega, who is now be cemented into cinema history for playing Finn in Star Wars: The Force Awakens. He is very impressive in this film, and there are actually a few moments where if you look closely, he holds a weapon like a bat or a samurai sword in the exact same way he holds the lightsaber in Star Wars. It is a funny little piece that should get a good laugh from anyone that has seen The Force Awakens. After watching Attack the Block, it is easy to see why JJ Abrams chose Boyega when casting for Finn, because he plays a great leader in the movie and his intensity in the action scenes is unmatched by any of the other amateur actors who play his fellow gang members.

One of the highlights of the film is the special effects, in particular the alien creatures that were created by the VFX team behind the film. The team had actors and actresses play these aliens in costumes, and then worked on things like their fur and teeth, as well as replicating the aliens en masse, in post production. The end result was incredible based on what is reported as only being a $13 million budget, and they are the best part of the film outside of Boyega’s performance. The sounds these creatures make as they chase down the gang are terrifying and not once during the film did I ever stop and think “wow that was poorly done” or “that was some awful CGI”. Everything comes across really well from the VFX side of things and is what separates Attack the Block from the countless other low budget sci-fi films that attempt to create this same atmosphere every year.

The only drawback with Attack the Block is the heavy London accents. Obviously it is realistic to the scenery, and it reminds me of Eggsy’s family and friends in Kingsman: The Secret Service, but it is almost to the point where you need English subtitles in many parts of the film. Personally, this does not bother me, and about halfway through the film I noticed that I was starting to pick up on the phrases and accents much better, but I know that for some people this can be a real turn-off. My suggestion is to stick with the film and ignore subtitles to let your own brain start to piece together the puzzle of the inner-city London accents, but you may want to turn on the optional English subtitles if this becomes a problem for you.

I would highly recommend watching this film, now more than ever as the rise of John Boyega’s stardom occurs in front of our eyes. It is fast-paced, full of action, hilarious, scary, and an all-around great time. With every movie clocking in at over 2 hours these days, pop Attack the Block in and remember what it is like to make a science-fiction movie that can tell a story in a reasonable amount of time.

Attack the Block is presented on Blu-ray near it’s original aspect ratio (2.39:1) with a 2.40:1 crop. This means that there will be significant black bars on the top and bottom of your screen on a typical 16:9 HDTV, but it was good to see that Sony kept the original cropping and did not cut anything out in the transfer. I consider this especially important because in this movie, there are lots of moments which happen on the edge of the screen, whether it be an alien sneaking around a corner or side action off the main characters in an action scene. These moments would be lost if the transfer had been cropped, so this is a positive.

Attack the Block is a very dark movie, taking place completely at night and within poorly lit spaces like small apartments or hallways. This is where the transfer struggles a bit. I watched the film in a dimly light room, as I do for any review to avoid any contrast or brightness issues. Unfortunately, Attack the Block seemed to struggle with the black levels and there were a few instances where the picture seemed a bit muddy, with grays and blacks and darker blues all running together. Some of this probably stems from the transfer and some probably comes from my TV, and everyone’s experience with this will differ, but I do not typically have this issue and I seemed to notice it a lot more on Attack the Block.

The DTS-HD Master Audio 5.1 track for Attack the Block is an excellent mix, and extremely loud, which is great for audiophiles to show off your system. Dialogue is clear, or as clear as it can be when delivered in that inner-city British slang, and the distinct sound of the alien’s screech rings through every speaker. Whether the attack is coming from the back, side, or front, it sounds as if the creature is standing right next to you. This was by far my favorite part of this release, and it is a track I would use to show off my system, especially in the heavy actions sequences, where man and alien meet in battle. Obviously there are better mixes available for those of us with 7.1 system or new Dolby Atmos setups, but for your typical 5.1 home theater audio system, this is what I would consider a “reference” track.

For a smaller release, there is a great amount of special features, including three separate commentary tracks, and they are great additions to the release. 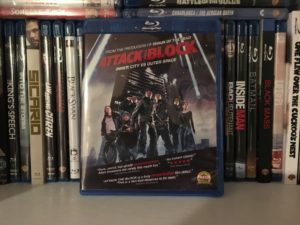 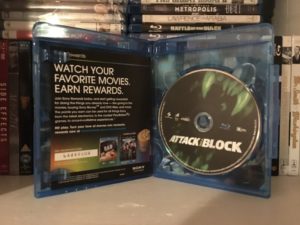 I highly recommend picking up Attack the Block for a few reasons. For starters, it is John Boyega’s film debut, and if you liked him in Star Wars, this is a much different role but it really shows off his range and ability as an actor. Secondly, this is an incredible alien invasion film, one which explores the invasion in a more “micro” way than most films, which often portray the sprawling destruction of cities all over the globe. Finally, it is a damn good time. There is a ton of action, it is hilarious, especially for fans of Shaun of the Dead (Nick Frost plays a weed dealer in Attack the Block), you can get it for about $8 on Amazon, and it is quick, making it a great movie for a weeknight.