Ash vs Evil Dead picks up the story of Ash (Bruce Campbell), the protagonist from Evil Dead and Army of Darkness. After 30 years of avoiding society and working meaningless jobs, Ash suddenly and mistakenly awakes another deadite plague, and he is thrust right back into the spotlight as the only hero who can stop the outbreak before it destroys mankind. With each episode only running for 30 minutes, outside of the 45 minute pilot directed by Sam Raimi, the season moves quickly and at a pace perfect for a binge watch session. The show never felt too quick or too long, and it was just the perfect amount of Bruce Campbell in each episode to satisfy fans of the original Evil Dead franchise. 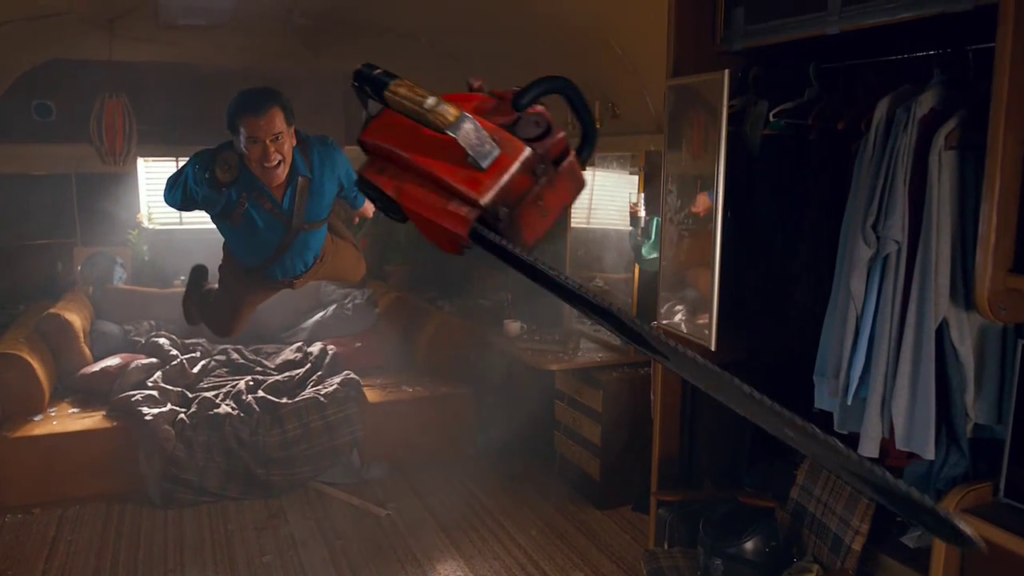 The tone of the show is much more Evil Dead 2 and Army of Darkness than it is the original film, with lots of fun one-liners, crazy amounts of gore and cheesy special effects. Bruce Campbell is in rare form as Ash for the majority of the series, with his macho attitude and suave moves with the ladies on full display. Fans of the Evil Dead movies, Sam Raimi’s style, and B-movie horror cheese will certainly love Ash vs Evil Dead. I found myself hooked just one episode in, and before I knew it, I was removing the first disc and finishing off the first season. The supporting cast is great, and they add to the hilarity that is Ash vs Evil Dead. I can see this show running for many seasons on Starz, and as long as horror fans continue to tune in and support the show, the cast and production team behind the scenes will surely continue to display excellence. I highly recommend checking this one out.

Ash vs Evil Dead comes to Blu-ray in its original 1.78:1 aspect ratio, meaning that it will fill your entire HDTV with all its gory goodness. The picture is a bit soft, as to be expected from a TV show versus a movie, but the colors look great. Even in the darkest scenes, the contrast and brightness stay consistent and allow for an easy viewing experience. 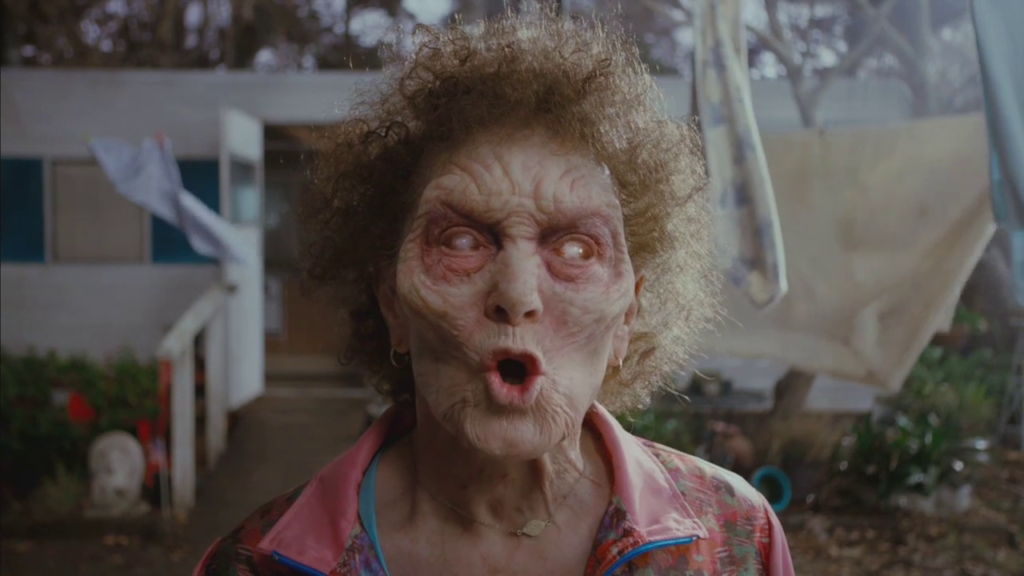 At times, the special effects can look a bit cheesy and at times I thought that the picture could be a bit blurrier than a typical TV show, but the cheese just adds to the Evil Dead experience. Basically, the Blu-ray transfer looks as good as any other TV show, and is nearly identical to the live broadcast of the show. Nothing was changed in the transfer to Blu-ray, and that is always a good thing.

In a surprising turn for a TV show, since most of them don’t even get a Blu-ray release anymore, Anchor Bay and Starz decided to package a beautifully sounding Dolby TrueHD 7.1 track with Ash vs Evil Dead. The show sounds great, and the music, screams of the deadites, and chainsaw roaring action all shot through my SVS Prime Tower system. The surround speakers get a lot of work in all of the action-packed sequences, but the real standout is the subwoofer. 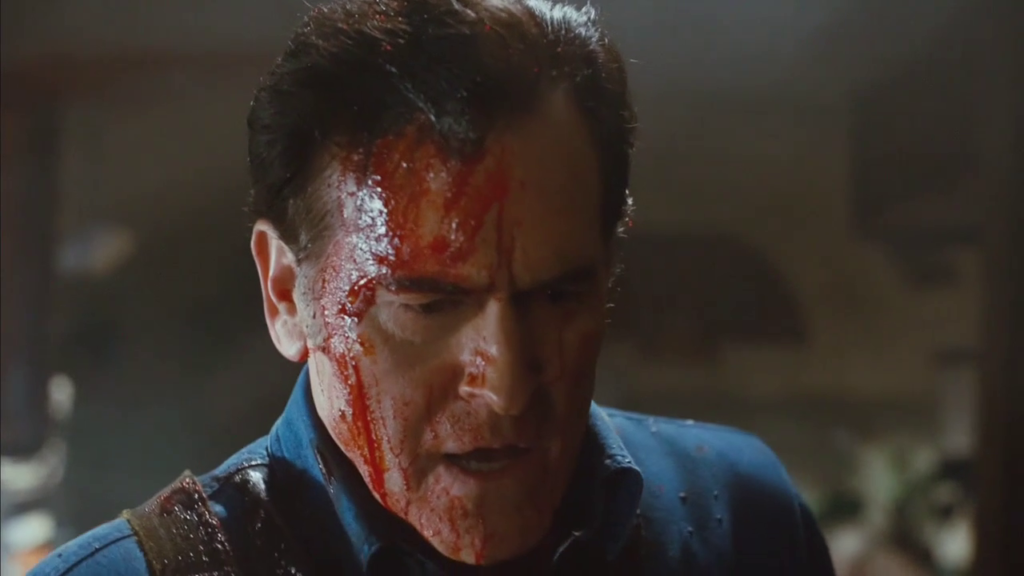 The low bass effects are extremely important in horror, even in a comedy-horror like Ash vs Evil Dead. As I had previously mentioned, the subwoofer action instills the sense of dread in the audience, and in Ash vs Evil Dead nearly every time there was a scary situation, the subwoofer was pumping and really had me fully immersed in the show. Make sure you have a strong enough subwoofer to hit the full range that this Dolby TrueHD 7.1 track has to offer; my PB-2000 from SVS did the trick.

Ash Vs Evil Dead comes to Blu-ray in a two-disc set, complete with an excellent lenticular slipcover. The lenticular is one of the coolest in my collection, as it switches back and forth between a dark background and a very bright one, creating a lightning-like effect on the cover. The discs also feature excellent artwork, which goes to show the care Anchor Bay put into this release. 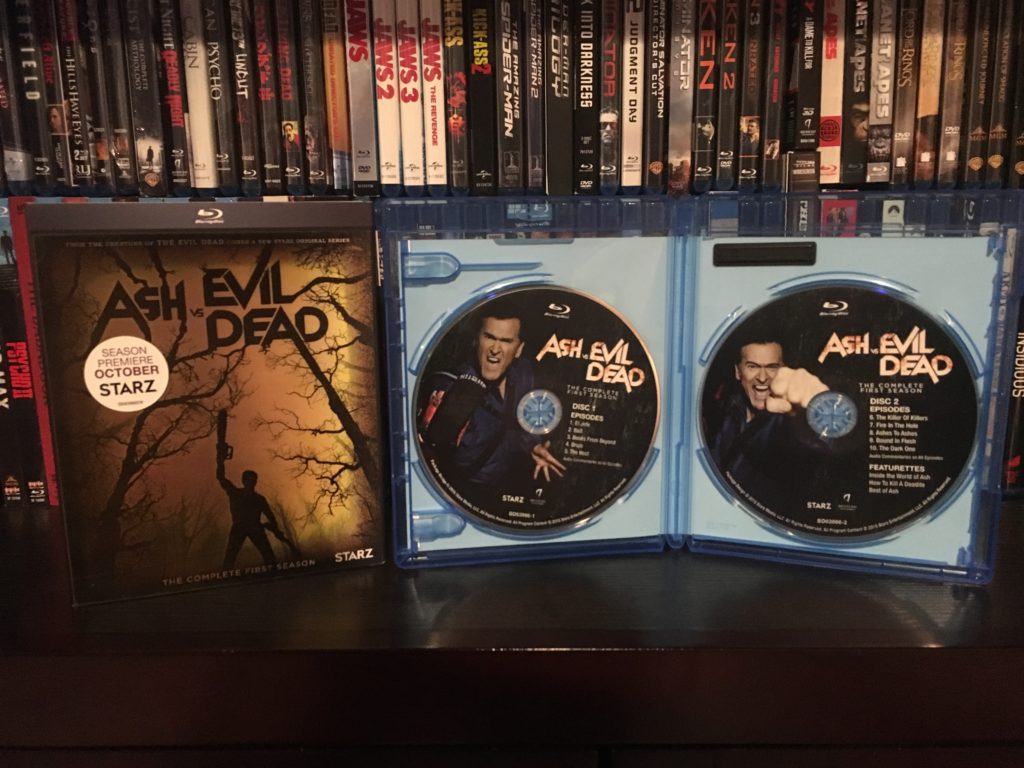 Unfortunately, there is no digital copy included with this release, and there is no DVD. The two Blu-ray discs split the first season into two parts, with 5 episodes on each disc. The lack of a digital copy is a bit surprising for a TV show, since many people like to own the show and take some of their episodes on the go, but the packaging is really incredibly well-done. In fact, Best Buy has a MetalPak exclusive edition which is another excellent option for collectors that you may want to check out as well. 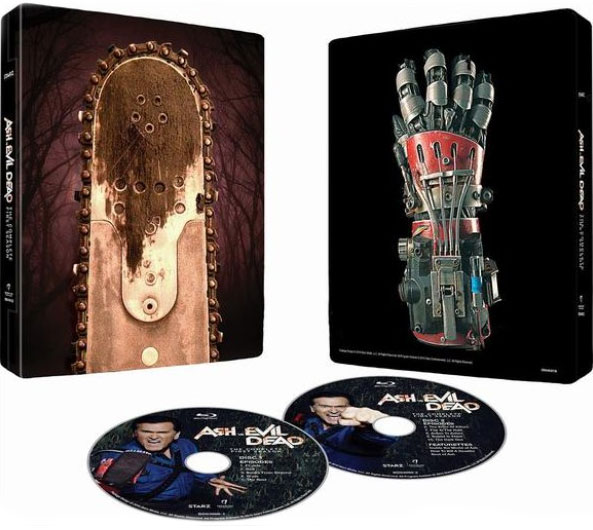 As for special features, they are pretty solid. We get 8 out of the 10 episodes with a commentary track from the man himself, Bruce Campbell, as well as Sam Raimi, Bob Tapert, and other cast members sprinkled in. All 10 episodes have a commentary track, and they are the real draw. We also get a few featurettes, about 25 minutes in total as follows:

So often in this generation of nostalgia-fueled reboots we see failure, disappointment, and outright sadness in the place of what could be greatness. Thankfully, by securing Bruce Campbell in the lead role and returning him to the production team with the minds of Sam Raimi and Rob Tapert (the original filmmakers), Starz has themselves a hit with Ash vs Evil Dead. With TV season typically being high in price and the justification of TV on Blu-ray always in question (read writer Chris Haller’s excellent piece on that issue), it is hard to recommend a blind buy for this release, even at a rather low $25 release price. Rather, newcomers to the series would be better served watching it On Demand or with their Starz subscription. However, hardcore Evil Dead fans, of which there are many, absolutely need to own this Blu-ray release. You can order Ash vs Evil Dead: Season 1 from Amazon, or grab the MetalPak from Best Buy.