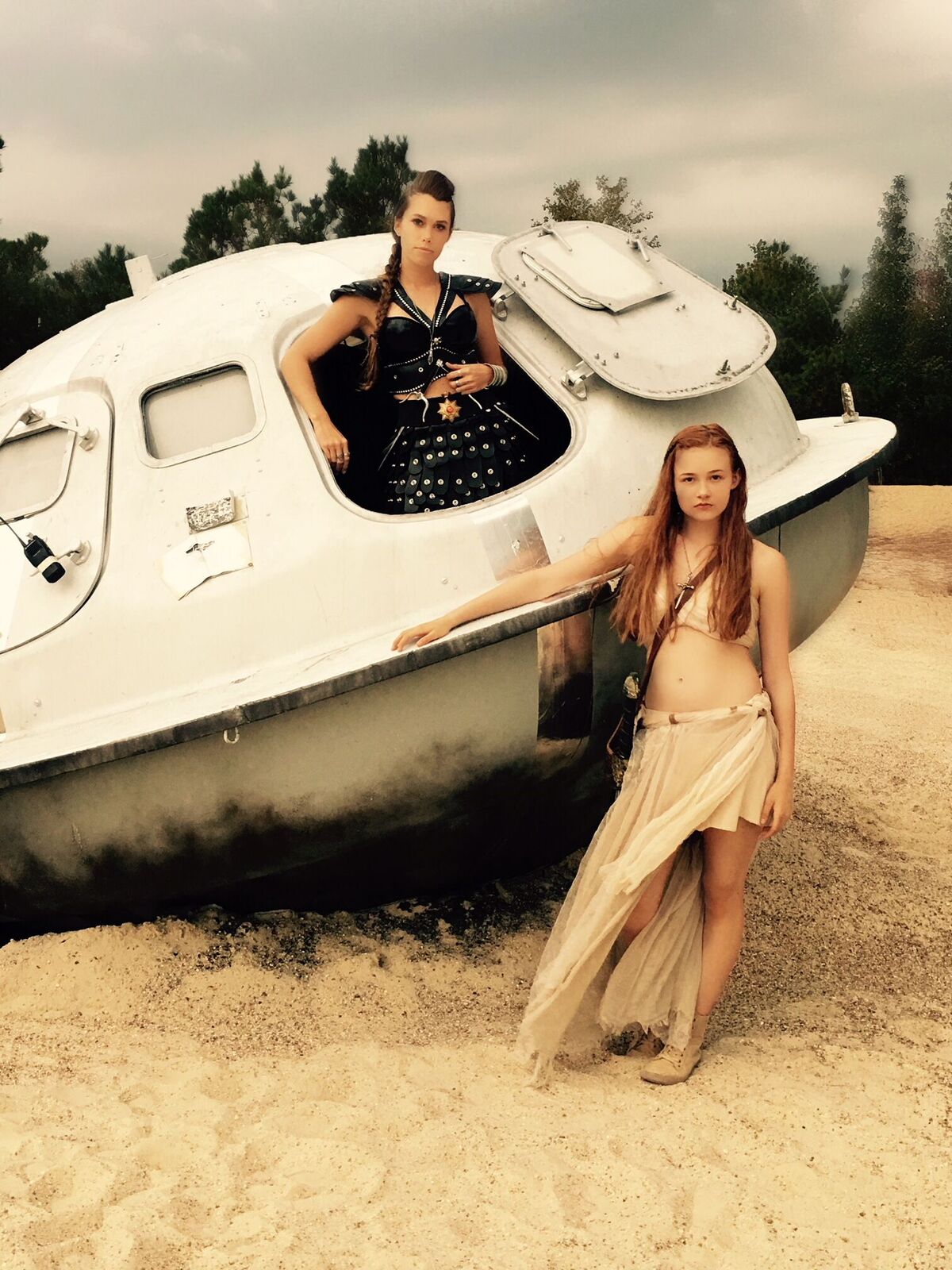 R to L: Thora and Mia

Apocalypse Rising is a 2018 comedic fantasy film directed by Richard Lowry and written by Gregory Wolk. The film has an ensemble cast of Hunter Parker as Mia, Shiah Luna as India Jones, Shane Samples as Magnum and James R. Frey as Karl being the most prominent of the cast.

The plot of the film has six survives from a doomed planet escaping to earth. Mia(Parker), her brother Magnum(Samples), Karl(Frey) who killed her father, Magnum’s wife Thora(Victoria Steadman), Phoenix(Justin Laburn) the pilot and his wife Beset(Johanna Rae). The six land on earth trying to find out if the biblical plague from their world is here on earth. Karl abandons the group, but they meet India Jones(Luna). They discover that the plague is coming to earth due to religious wars and this group of extraterrestrials are the only ones who can stop it.

The first thing right off the bat with Apocalypse Rising is that this is not a film for the religious. A lot of changes that could be viewed as sacrilegious. At one point in the film there is a zombie baby Jesus. The backdrop of the film is a religious war near the Dead Sea. The war seems to be the cause of the zombie outbreak as God doesn’t like religious wars, but there is also talk of the war begin made because the Pope is the anti-Christ. While, the Pope is the ultimate evil story line isn’t really there it is still featured heavily in a scene in the middle of the film. The end of the film also seems to tip the scales through sacrilege. Spoilers Next Sentence.  The only way to stop the zombie onslaught is for Mia to sacrifice herself as Jesus did to wipe away sins. After she does this, she takes Jesus’s role of watching over humans on earth. Not for the religious.

Another turn off for some would be the amount of sex in the film. Through various points in the film two characters just start having sex. While sex in film isn’t outside the norm, the sex in this film is. In the middle of an explanation of how the zombies are created, two characters are just having sex in a laboratory. While taking part in the conversation. The film is overly sexualized to an almost comical degree. Almost. The first person the aliens meet on earth is Shira(played by Kelly Brown) who fondles Magnum before getting punched in the face. Shira is the most overly sexualized character. At one point she is having sex with a man who turns into a zombie. She sees this and then has sex with his zombie form. 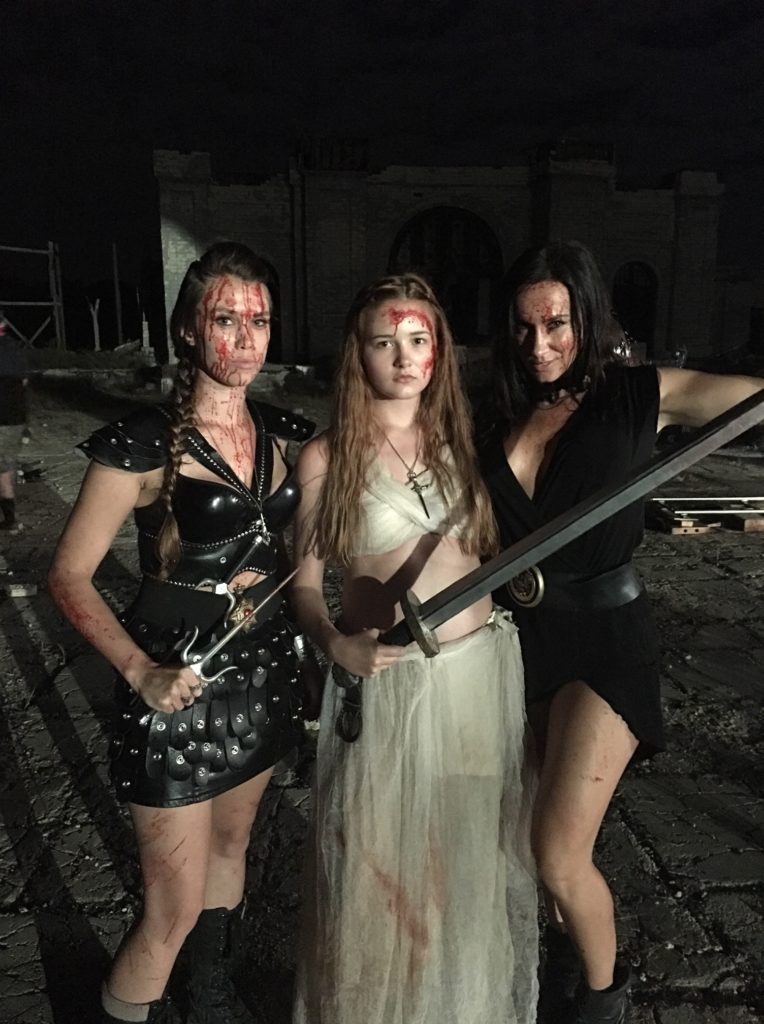 Overall the acting is pretty good. Simon Samples as Magnum grows on you as the film progresses as does Kelly Brown’s crazy Shira. The only one that stands out in a negative way is Doctor David Coleman played by David Namminga. He feels like the odd man out and only appears in the later half of the film. It doesn’t take away from the film, but it is noticeable.

The CGI and special effects are pretty good with one major exception. The prop head used for Mia’s father’s head is extremely bad looking. The CGI space ships, practical blood and zombie effects are good. It is just that one prop head that looks bad. And it looks worse when compared to the actor’s head used for close up scenes. 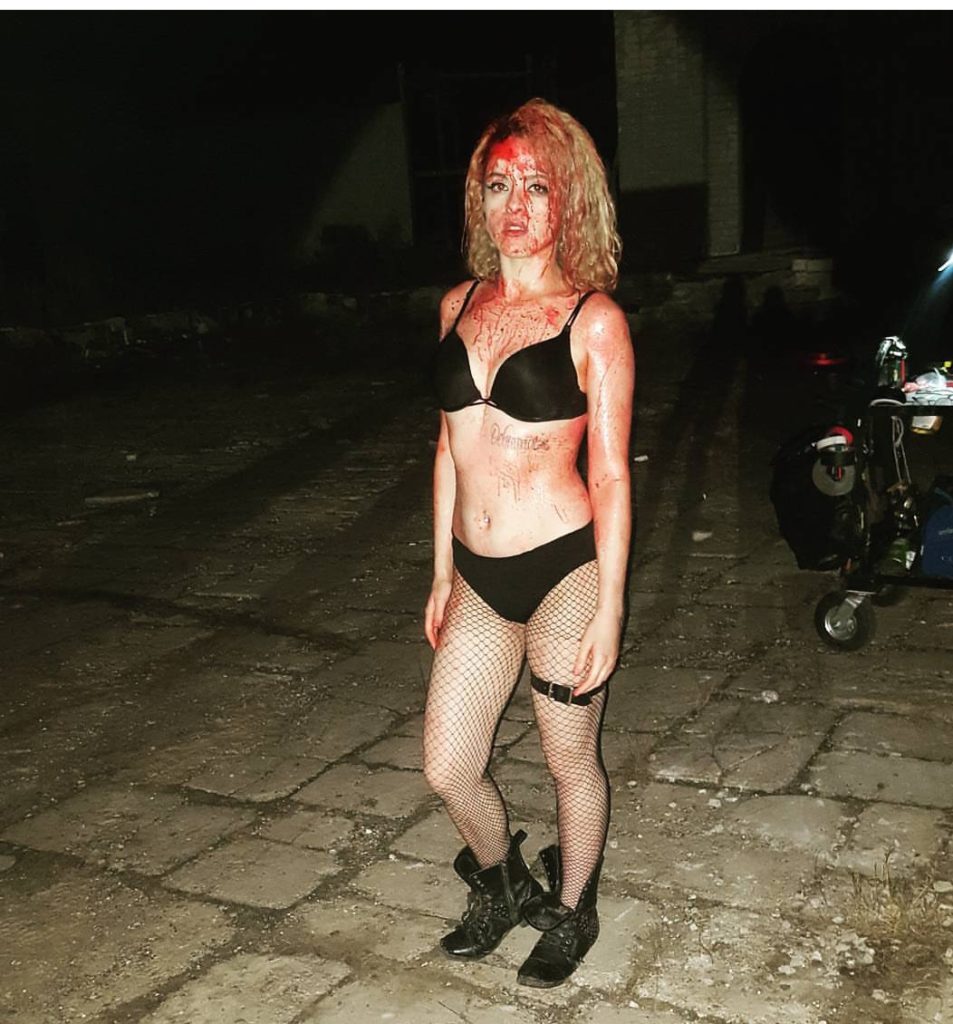 The overall story of the film has some interesting elements. The alien refugees running from God’s wrath is an interesting one. It has the fantasy elements down. The comedic bits often miss the mark though. I have to assume all the sex stuff is played for comedy, but comes off as bizarre more then anything else. A lot of time is also spent on explanation. Where the aliens come from, how they are different, the differences between the two worlds, how to stop the zombies and a few other dozen things are explained instead of shown. The weird mix of fantasy and over the top bizarreness take away from the clever plot.

Some Additional Thoughts: Takes place near the Dead Sea everyone speaks perfect American English. No one questions the multiple public sex. Everyone just lets it happen. End of the film seems confusing with magic staff coming out of no where. India Jones, nice reference to Indiana Jones. The village near the Dead Sea looks like it is from the middle ages and all the locals are wearing rags or old styled clothes from biblical times. A weird zombie priest scene preaching to zombie masses. A lot of important plot notes aren’t explained till half way through like Mia and Magnum are siblings.

The audio is pretty good. Dialogue is understood, music fits the tone of the scenes used. A lot of heavy metal music and a few religious sounding songs pop through the film. One of the only major issues is a scene where two characters are having sex in the background and their moaning drowns out the explanation going on in the scene. It hurt the scene, which was explaining important plot points.

Apocalypse Rising had the ability to be an interesting biblical fantasy romp with sci-fi elements. Instead it is a fairly solid film with a few major issues like the over sexualization and plot holes. It isn’t for the religious, sci-fi or fantasy fans. But fans of the biblical fantasy sub-genre might enjoy it.