Antebellum is a 2020 American horror film that was written and directed by Gerard Bush and Christopher Renz in their feature directorial debuts. The film stars Janelle Monae, Eric Lange, Jena Malone, Jack Huston, Kiersey Clemons, and Gabourey Sidibe, and follows a modern-day African-American woman who finds herself in a Southern slave plantation and must escape.

Antebellum was released in the United States through Premium video on demand on September 18, 2020, and theatrically released in several other countries. The film received mixed reviews from critics, who felt it did not live up to the premise’s full potential.

In its debut weekend, Antebellum was the number one most rented title across film and television on Amazon Prime Video, and the number one rented film on FandangoNow and Apple TV, and third on Google Play. IndieWire estimated that if about 500,000 homes rented the film, it would result in $8 million for the studio. In its second weekend, the film topped the Amazon Prime Video, FandangoNow, and Spectrum film charts, while finishing second at Google Play and sixth at Apple TV, and remained in the top three across most platforms into its third weekend. In October 2020, The Hollywood Reporter said the film was the sixth-most popular PVOD title amid the COVID-19 pandemic.

Antebellum comes at us during a time when there’s a significant uproar among the African American communities of the world, and the negative experiences that were had among those members over the years, dating all the way back into the slavery years. Overall, I found the concept of this film rather intriguing because of the view back into slavery, segregation and ultimately a really notable part in this country’s history. The movie gives viewers a pretty stylistic storyline that unfortunately uses a good number of tricks; but I didn’t find those tricks to be too deterring. I do feel like I’m going to need to re-watch this one sometime because there might’ve been some finer details that I’d overlooked. Despite that, I enjoyed it.

Presented in a 2.39:1 aspect ratio courtesy of Lionsgate Films, the UHD release of Antebellum looked pretty damn good as I watched this the other night. Obviously there were elements that were digitally captured; but, those didn’t make themselves known and did a really great job at blending into the natural elements of the movie. Overall, the visual presentation was clean, clear and easily understandable with really not much that makes it stand out more over other films on the format.

Packaged with an English Dolby Atmos audio track, Antebellum gives its viewers a consistently immersive experience. While the movie as a whole doesn’t really have much to offer in terms of the elevation aspect, the use of Atmos with the movie really made sure it puts you right into the middle of everything. Transitions between the channels were effortless, and really helped with its immersive-ness. Dialogue is spoken cleanly, and the characters are able to be heard and understood without the need to adjust the volume levels more to compensate.

The 4K UHD release of Antebellum comes packaged in your standard two-disc UHD amaray case.  In that case is both the standard Blu-ray and standard 4K copy of the film.  Each disc featuring the butterfly that’s prominent in other pieces of artwork with a different colored background for each disc to help distinguish the difference between the formats.  There is a digital copy redemption pamphlet that’s been included allowing you to add the movie to your digital movie locker.  There’s also a slipcover that’s been made available in the initial pressing of the release that features the same artwork that’s been provided on the case. 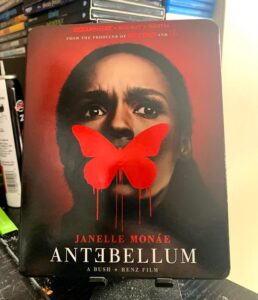 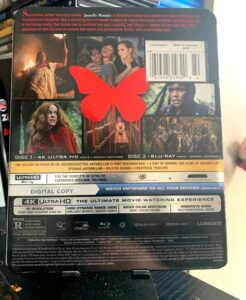 There are just a handful of special features that come packaged with the UHD release of Antebellum.  It was really nice to see that the content for the release was included on both discs in their respective visual presentation.  The material that was included, while it offers a nice look into the movie and its story; I would’ve also loved to have seen some of the behind-the-scenes experiences with the cast as they worked together in making the movie.  You can’t tell me they didn’t have fun with it!  Anyhow, included with this release is:

Overall, Antebellum was a pretty decent movie.  While it resorts to the use of some camera tricks and a jump scare or two, I was pretty happy to sit down and give it a shot.  It wasn’t necessarily a great film in my personal opinion, but that’s more of a “eh” kind of mood that it left me with.  The audio and video presentation of the 4K release were spectacular and really cleanly presented.  I didn’t have a single issue understanding what was happening, nor did I find myself having to increase any of my settings in my living room setup to compensate for something lacking.  The special features with this release were a solid inclusion and fun to explore.  If you’re considering picking this one up for your collection, I’d recommend checking it out when it goes on sale.  Antebellum is available on 4K UHD, Blu-ray and DVD today.