American Ninja is a goofy old MGM catalog title which spawned a series of equally goofy B-movies featuring the same terrible dialogue, unimpressive special effects, and typical 80s action movie cheese. Typically, I enjoy movies like American Ninja, but I had a hard time getting into this one. As you can tell from my previous review of Dangerous Men, which is often regarded as the worst movie ever made, I can have a little fun with the “so-bad-it’s-good” genre. However, American Ninja suffered from a sort of identity crisis. I did not feel that it was bad enough to laugh at, but it also was not nearly good enough to enjoy. It fell somewhere in the middle, which to me, means that it is probably just a plain old bad movie. 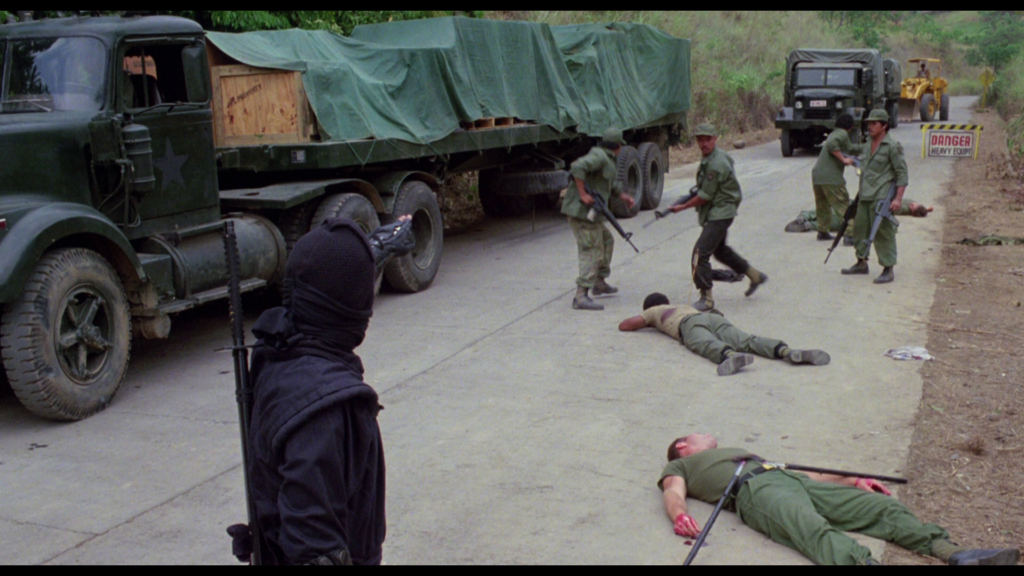 There are a ton of quick cuts, weirdly patched transitions, and just plain bad technique. The subject matter of the film, following Joe (no last name given), an Army Private with a knack for martial arts as he navigates his way through a winding story. The film has an army of ninjas owned by a powerful businessman, who Joe must confront. Truly, there is not a lot of connection to the story. We meet Joe, he is awesome at martial arts, and then conveniently the woman he saves in the opening scene, Patricia, has a father who has issues with the ninja army’s boss. Then they fight, and the ninjas look like children on Halloween with their ridiculous amount of “moves”.

Martial arts and kung fu movie fans will certainly enjoy American Ninja, as there are plenty of poorly choreographed fight scenes and lots of goofy gun, sword, and fist fights. I never really connected with the martial arts genre, so maybe this one just is not for me. There is certainly an audience for this type of movie, but I don’t see it being a mainstream success. Maybe as we move through the American Ninja catalog (we have all 4 movies for review from Olive Films, American Ninja 5 is not included) there will be a more consistent identity and a few more laughs, but so far, the series started out in a disappointing manner.

American Ninja was not a movie that was given a ton of TLC even during its initial release, and Olive Films has done what they can with the HD transfer. The movie was shot on film, which is immediately evident by the amount of grain in the image. Grain is not a bad thing, and the movie looks appropriate for its age and budget, but it is heavy and at times can affect the image. There are a few smoother sequences that look pretty good, but the source is clearly not the best.

Artifacts and tears, rips, or dirt in the film’s transfer are not prevalent, but you will notice them from time to time. I noticed them a lot in the opening scene, and then I began to adjust to them as time drew on. Coming from watching many new releases show digitally, this can be a bit of a shock, but eventually the quality will grow on you. It looks and feels like an 80s video rental; the nostalgia factor is huge here.

American Ninja comes to Blu-ray with a DTS-HD Master Audio 2.0 track, which is fine for this release. The left and right front speakers actually sound really great for a simple stereo track, and the dialogue is clear, although with this script, that may not be a good thing. Without any surround speaker use, this film could easily be enjoyed on a very simple audio system, which would be good for viewers with a limited home theater setup. However, if you have a powerful system, American Ninja will sound great for its age.

The lack of subwoofer action is also disappointing, but if you have a good pair of front speakers, like my SVS Prime Tower speakers, then there should be an appropriate amount of bass play from the speakers themselves and a subwoofer is not necessarily required. The audio is probably the best thing about this release, and it is a huge improvement over the video quality.

The packaging for this release is typical of Olive Films, with the numbered spine and the squared-off corners of the sturdy, unique Blu-ray case. There is no DVD or digital copy with this release; it is just a single Blu-ray disc. The artwork on the case is cool and stays consistent across all of the four films in the series, which is nice, and the disc artwork is also an added bonus. 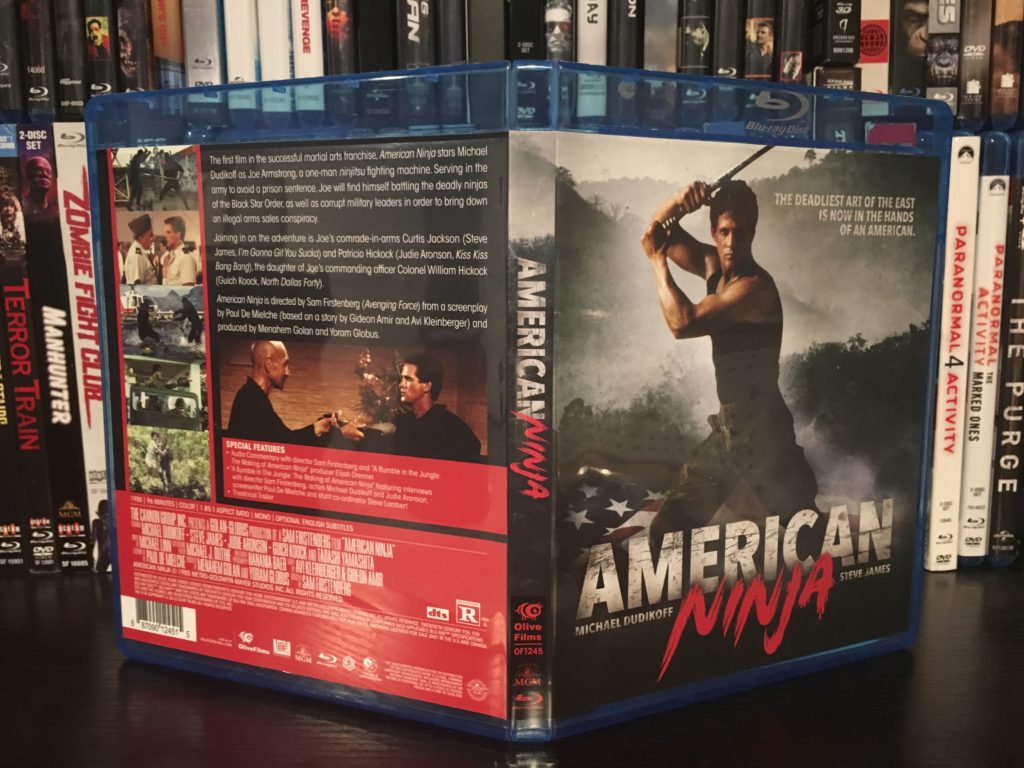 As for special features, there is a full-length commentary with the director and producer of the film, the original theatrical trailer, and a 23 minute “making-of” feature. The special features are actually a bit above average for Olive Films, and for a lesser known movie like American Ninja, the full-length commentary is a great piece for hardcore fans of the series. 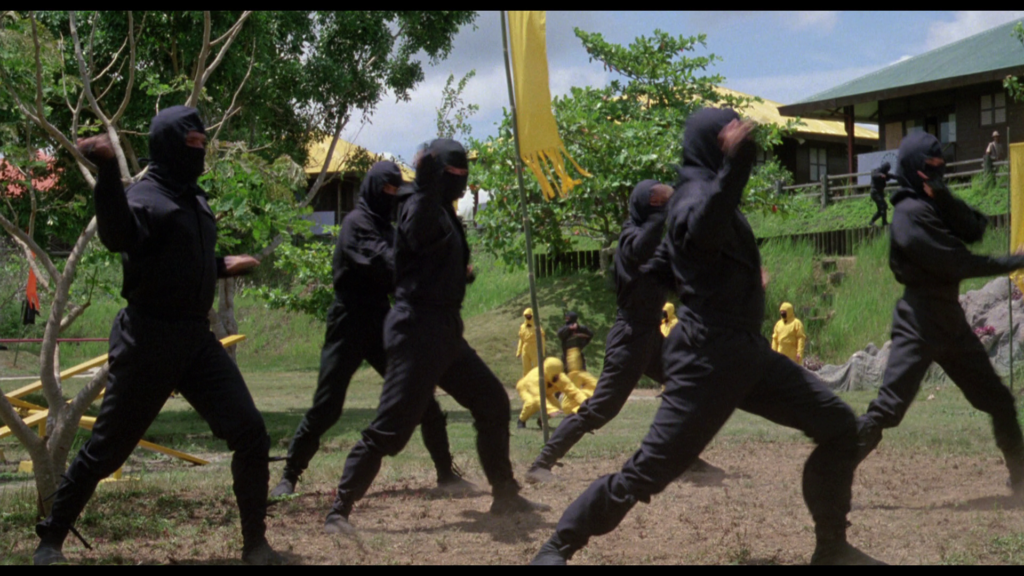 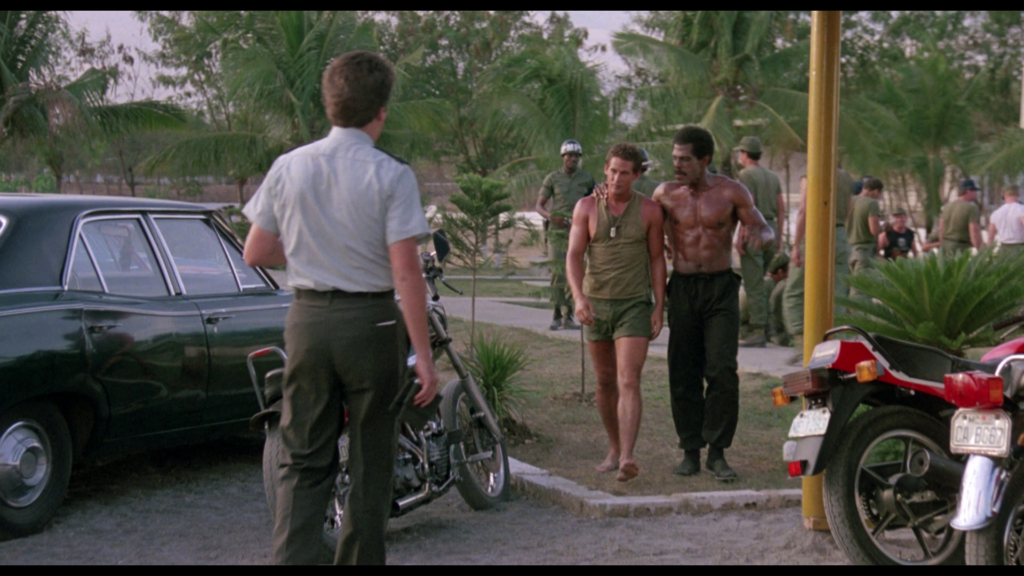 American Ninja isn’t for me, but that does not mean it is not for everyone. I am a child of the 90s, so the 80s action schlock that dominated the theaters and cable TV does not resonate with me as much as say, Face/Off or Con Air would. However, Olive Films has presented a decent Blu-ray presentation for a lower caliber and roughly shot film like this, and the special features are worth a purchase. If you are not already a fan, a blind buy is not something I should recommend, but if you enjoy the genre and are looking for something new, then American Ninja is probably a sure bet for fun. For hardcore fans and those seeking some 80s nostalgia, this is a must-buy. You can grab it from Amazon for under $15, and it is available now.