I would write an intro for this set, but the description of the American Horror Project, Vol. 1 set from Arrow Video will do it more justice than I ever could.

Everyone knows the classic American horror titles: Night of the Living Dead, The Texas Chainsaw Massacre and A Nightmare on Elm Street, to name but a few. But we want to tell you a different story – a story of the unsung heroes of American terror… Whether it’s a film that has languished in obscurity, or a movie that’s at risk of being lost due to lack of source materials, American Horror Project is here to ensure that these unique slices of the American Nightmare are brought back into the public consciousness and preserved for all to enjoy.

This collection of three classic American horror movies, Malatesta’s Carnival of Horrors, The Witch Who Came In From The Sea, and The Premonition, have been released for the first time ever on Blu-ray by Arrow Video. These are movies which many thought to be lost, destroyed, and/or beyond repair, but Arrow has managed to take the best surviving elements of these classic films and bring them to our home theaters, and I am glad they did. Cinema survives on the backs of distributors like Arrow who are willing to invest the time and effort into restoring these long forgotten movies and bring them back to the forefront.

All three films are classic examples of the gory, exploitation movies that made the 1970s an excellent decade to revisit. They certainly are not for everyone, as even the most hardcore horror fan could find them too “different”, “boring”, or “gross”, as some of my friends noted when watching this set with me. However, I found myself totally engrossed with the history and cultural importance of these films, and I very much enjoyed my viewing of this set. With runtimes at 73, 84, and 93 minutes respectively, it certainly isn’t a “project” to watch the set.

One piece that I really enjoyed about this set was the opportunity to watch each movie as is, or with an introduction by Stephen Thrower, Author and Curator of this set. Mr. Thrower gives each movie a roughly 4-5 minute introduction, explaining its importance, backstory, and any interesting tidbits that went along with the film’s original release. Starting each movie with the introduction feels like you are watching part of an art exhibit, or festival piece, and I love the aesthetic it brings to the set. 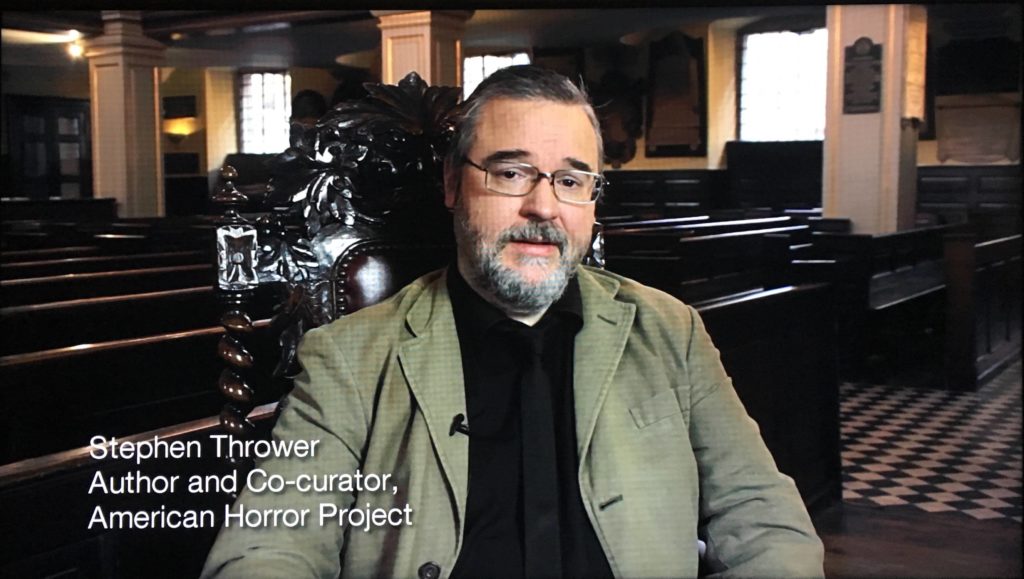 Overall, watching the set is a great experience. These are the types of movies that you would typically see in an art house theater or a “Midnight Movie” screening, so getting a chance to see these lost gems on Blu-ray while sitting on my couch at home is unbelievable and well worth the price of the set, which is going for $80 right now on Amazon.

Each one of these films was saved from the depth’s of cinema hell and fully restored from the original masters to a new 2K presentation. You will notice that my picture quality score is only a “2”, and to be fair, the picture quality here is not much better than that. But you have to understand what these films went through to get to this point. For example, Malatesta’s was thought lost for over 30 years before making its first appearance on home media on DVD in 2001, released by the original director. Arrow took this original copy and painstakingly put it together into a 2K restoration that is more than serviceable for the home theater enthusiast considering its age and obscurity. 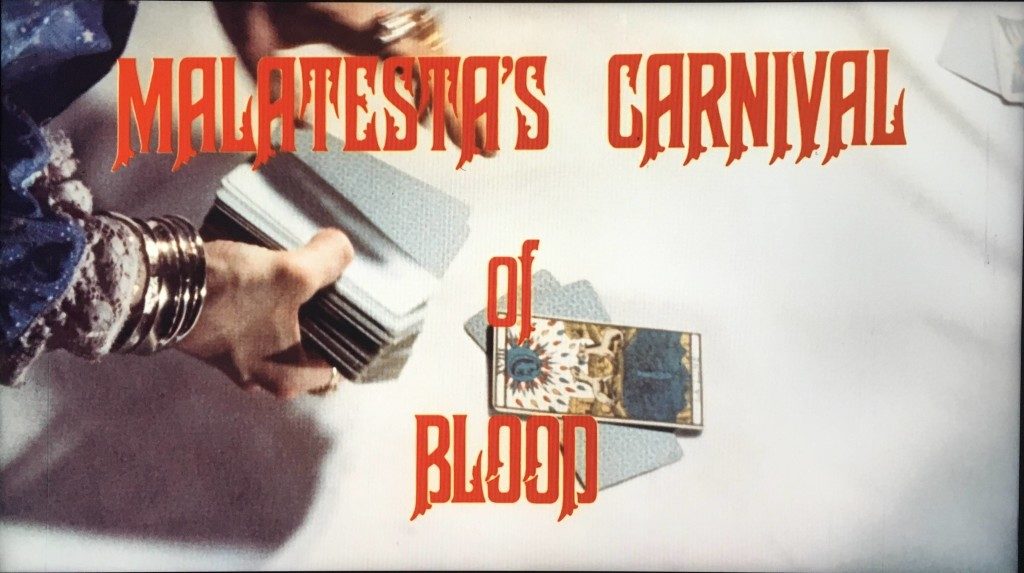 Each film has plenty of artifacts, which is not uncommon for older films, but they are definitely more pronounced in this set. The typical black and white artifacts that pop up in transfers that come from movies shot on film are present, but there are also horizontal and vertical lines that occasionally run through the film, which can be distracting to some. For me, it was all part of the experience, and I don’t think it would have been the same if these three classics were glossed over with heavy digital noise reduction.

Colors are a bit washed out, which is to expect after 40+ years in limbo, and the movies can feel flat at times, but I cannot complain. These films were saved from the fringe areas of cinema that fall through the cracks over the years, so the fact that they are on a Blu-ray disc at all is a huge win for the physical media community.

Audio is more than good enough for this collection. The original mono tracks are preserved here, but they do not feel underpowered. With everything running through your center channel in a typical surround sound system, just turn the volume up and you will have no problem hearing all of the dialogue. 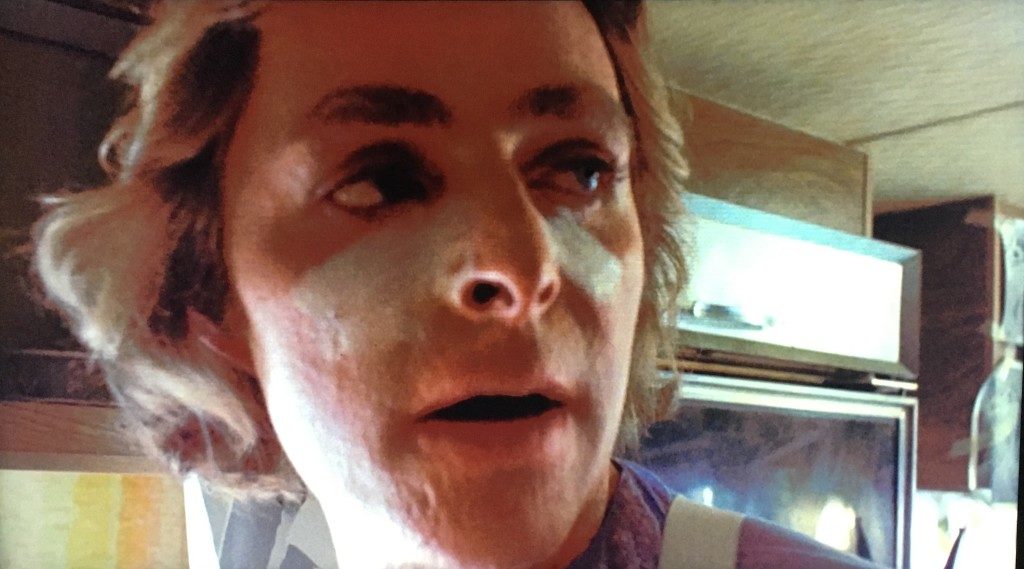 The audio mix is done very well for a mono track, which is a testament to the original sound editing and mixing done by each movie’s production teams. The volume needs little adjustment once you get it to your sweet spot, and the lack of surround speakers do not make a serious impact. For audiophiles, this set is not going to blow away your friends and show off your system, but it pairs well with each movie and I like that the original tracks were preserved and used in this release.

One gripe is the lack of subwoofer use, since horror movies tend to make great use of low bass, even beyond our natural hearing capacity, to instill a sense of dread in the audience as we watch. I think an isolated bass track could have done well here, but it is certainly not necessary.

The packaging is a typical box set, with a high quality cardboard box containing the three movies and a 60-page booklet about the project, restoration, and films. 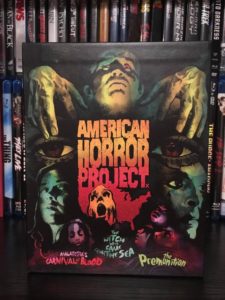 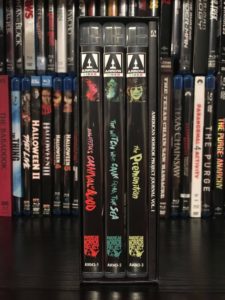 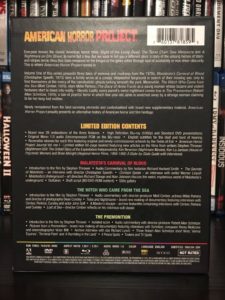 Each movie comes in an individual case with both a Blu-ray disc and a DVD, and they each come with a reversible art sleeve with new artwork from The Twins of Evil, as well as an alternate copy of the original artwork on the flip side. It is a beautiful set, and it is limited to just 3,000 copies, so make sure you get your orders in now before it’s gone! 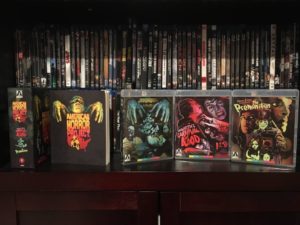 Overall, this is now one of the coolest sets in my collection. The obscurity of the films, the limited edition set, the cultural relevance, and some real, gory, exploitation horror; what’s not to like?!

The set is beautiful, it will look great on display, and it is a great talking piece for friends and family when looking over your collection. As collectors of physical media, I think that somewhere deep down in each of us we have an urge to preserve great films and make sure that physical copies of them will always be available, even 50 years from now when digital services are obsolete and lost. This set is a great addition to feed the “curator” in all of us.

I highly recommend this set to any collector, especially those of us with a love for obscure cinema.