While still running the wildly successful American Horror Story series, creator Ryan Murphy decided to shift his focus to create another mini-series: American Crime Story. Running on FX, the first season of American Crime Story focuses on the infamous O.J. Simpson murder trial, with Cuba Gooding Jr. playing O.J., and a well-known cast that features John Travolta, Sarah Paulson, Nathan Lane, Courtney Vance, Bruce Greenwood, David Schwimmer, and Kenneth Choi. It is an all-star lineup which helped propel the show to 22 Emmy Awards nominations, but it certainly was not as great as advertised.

Part of the issue with American Crime Story was that it was overacted. Many of the scenes left me rolling my eyes, as the drama was turned up to “10” but the acting remained subpar. As great as some of the names in the cast may be, many of them were poorly cast or did not perform well in their roles. The prime example is John Travolta, who just looked strange in his role as Robert Shapiro. Travolta honestly looked like he was wearing a bad Halloween mask for the entirety of the show, and he looked nothing like the real-life Shapiro. His acting was okay, but when you look like a melting wax figure of the man you are supposed to portray.

I had a similar issue with David Schwimmer, who plays Robert Kardashian. I may not be alone in this, but to me, anytime I see David Schwimmer I can only see Ross from Friends, which essentially makes this show “The One Where Ross Defends O.J.”. I had a similar issue with Schwimmer in Band of Brothers, and it is not surprising that he does not show up in many movies or television shows these days; I don’t think that this perception is unique to me. Basically, the entire O.J. legal team is a disaster in terms of performance and casting, but thankfully Courtney Vance, who plays O.J.’s other lawyer Johnnie Cochran, is very solid in his role and is one of the major highlights. 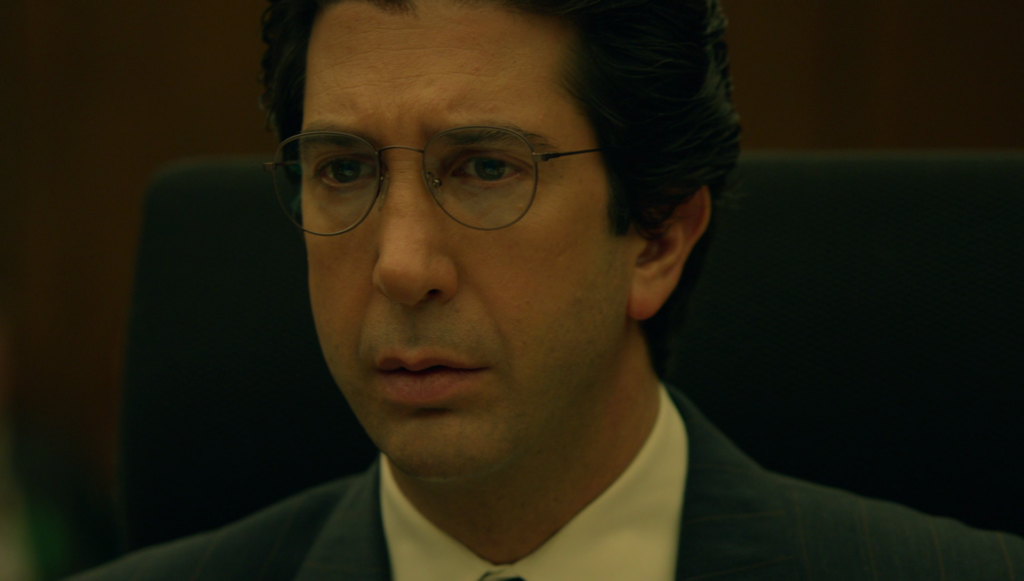 There are a few other highlights, mainly Sarah Paulson as Marcia Clark (who has a great chance to win an Emmy) and Cuba Gooding, Jr. (who has a great chance as well), but the rest of the cast and the multitude of nominations surprises me a bit, especially for Travolta and Schwimmer. I am a bit negative about the show as a whole, simply because this was not even the best series on the O.J. Simpson case released this year. ESPN released a 5-part documentary series titled O.J.: Made in America that blows this show away. Obviously we are dealing with documentary versus a dramatic re-creation, but the ESPN show is head and shoulders above American Crime Story. However, the ESPN series did not get a single nomination for the Emmys this year because it ran after the cutoff date, but there is talk that it could receive an Oscar nomination for Feature Length Documentary (the series ran in theaters, making it eligible) and it should clean up at next year’s Emmy Awards once it is eligible. American Crime Story is an okay watch if you are a real “true crime” fan and love courtroom dramas, but if you are just looking for the best representation of the case, I would skip American Crime Story: The People v. O.J. Simpson and opt for O.J.: Made in America instead.

American Crime Story offers a solid, but somewhat displeasing picture. The show is pretty typical of FX dramas, shot digitally but with a gritty look and feel. It looks clear and sharp, but the color is what bothered me the most. Everything seems to have a yellow/brown tint to the image, and although that would make sense for flashback scenes or things shot in the past to show age, it is distracting when used for the entire show. 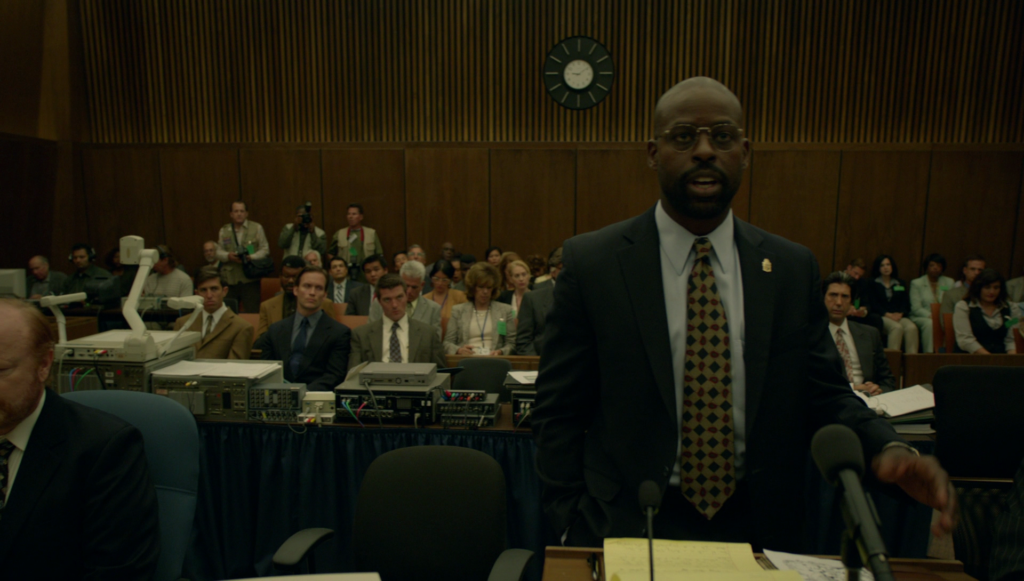 The courtroom looks off in many scenes, especially when compared to images and video from the real-life scenes, where the courtroom looks fairly bright and well-lit. I understand that crime is a gritty thing, but I do not understand the use of the tint for this show, as it did not seem to play into a particular theme. The only thing I can think is that O.J. wore a light brown suit and a yellow tie in the most famous pictures from the day the verdict was announced. If that is the only tie-in to the color scheme, it is a pretty weak one.

American Crime Story sounds great on Blu-ray, and even though it is fairly dialogue driven, there are a few moments where the DTS-HD Master Audio 5,1 track shines. For example, the famous Bronco chase is great, and the courtroom scenes offer an extremely immersive experience with their ambient noise and appropriate echo. The soundtrack is well-done and adds a lot to the environment, and overall the audio is extremely well-balanced and appropriate for a high-budget TV show. 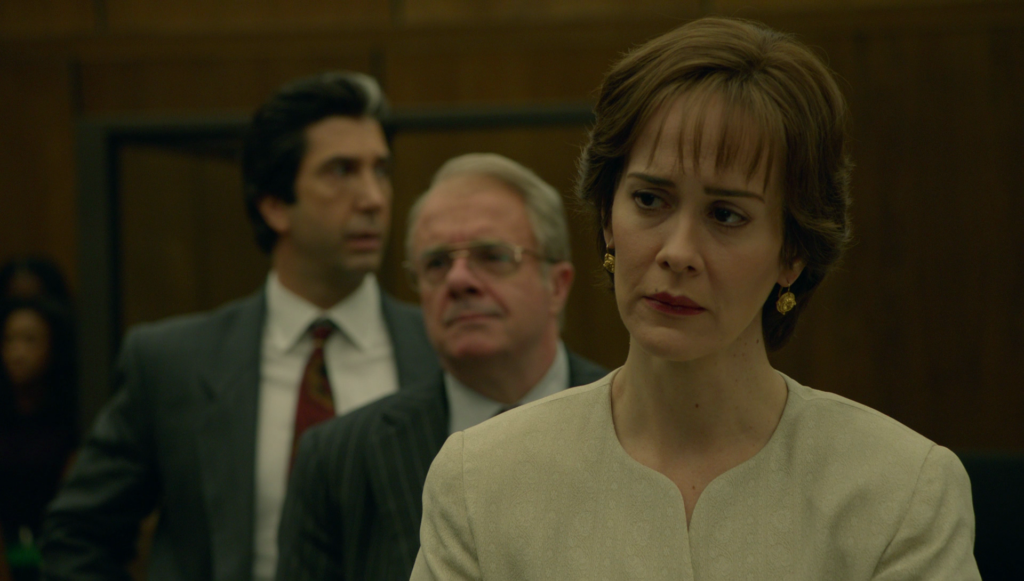 I continue to be impressed with my SVS Prime Center speaker, which seems to be the biggest positive in my recent home theater upgrade. Of all the improvements I made, the center speaker is the most important so far, because dialogue and balance is such an issue with watching movies at home. American Crime Story is full of serious conversation, and you do not want to miss a beat, so it is so important to put down the remote, stop adjusting the volume, and just sit back and enjoy, hearing everything with ease. The DTS-HD Master Audio track definitely helps with the balance, but I cannot stress enough how important a home theater system is for at-home experiences.

I want to give a better score for the features and packaging, but unfortunately the great packaging well outweighs the limited features. For packaging, we are treated to a nice fold-out slipcase, with a velcro snap to open and close. On the inside of the slipcase, there is an informative timeline of events, and it is a really cool addition to the package that clearly took a little extra effort on the part of Fox, so props to them. On the inside, we have three Blu-ray discs with a spindle inside that holds disc two, with disc one and disc three on the front and back of the case, respectively. The artwork on the slipcover features the poster art, but it is a nice piece, and the disc art is plain, but well designed. 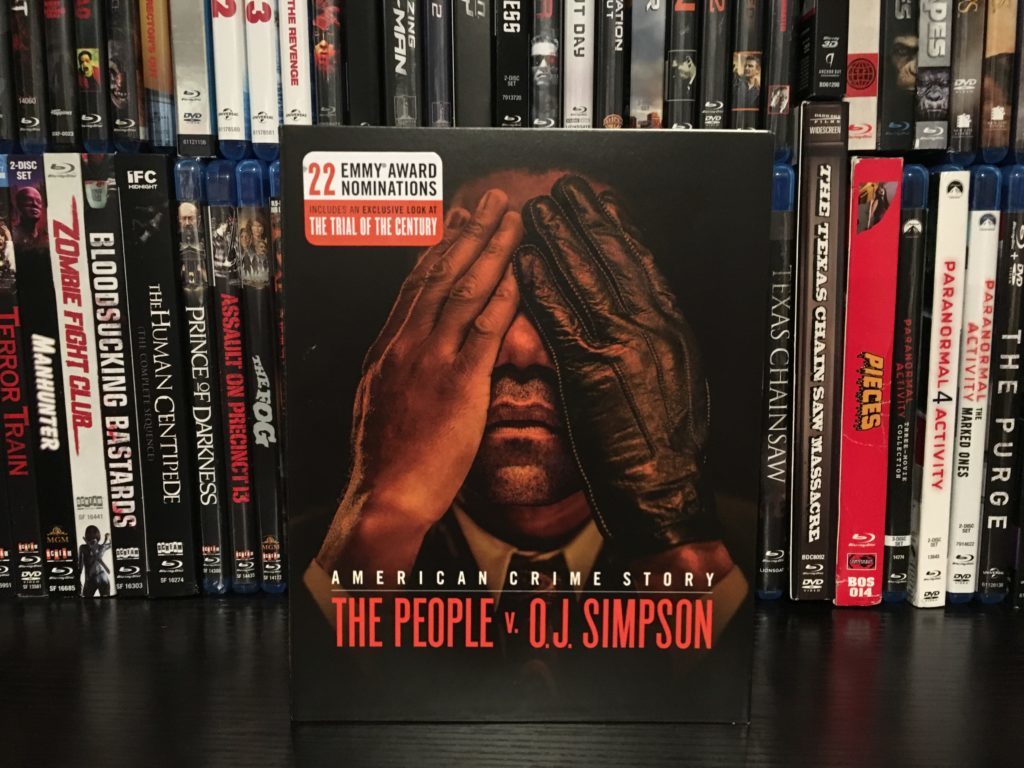 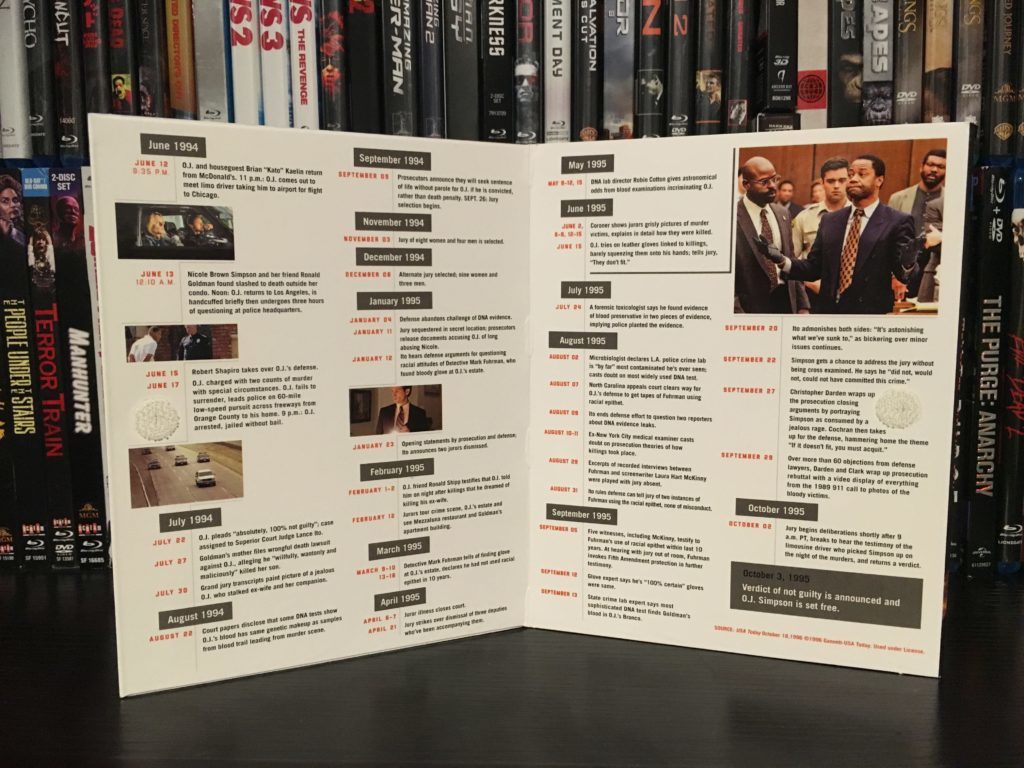 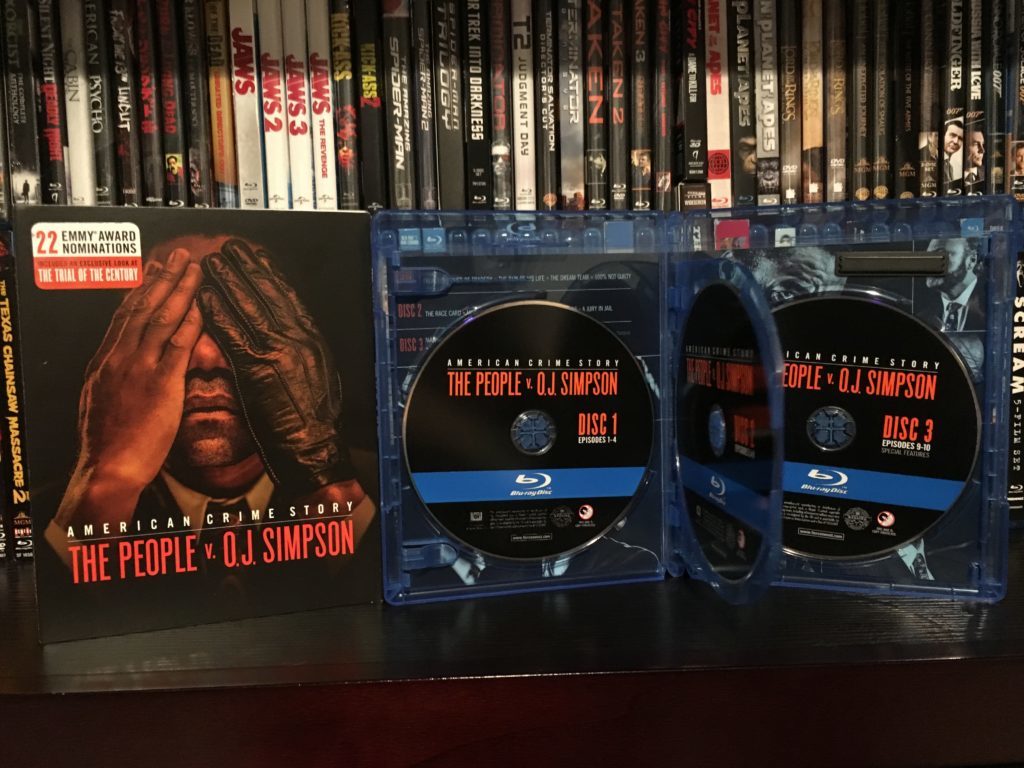 As for features, we have just a couple, which add a nice historical background to the show, but are limited in scope. They are as follows:

American Crime Story: The People v. O.J. Simpson is a decent first effort for Ryan Murphy and his crew, but I would like to see them tackle a lesser known story and shed some new light on other interesting crimes. The O.J. Simpson case has been done so many times, and having been covered in the same year in a superior documentary series, I see American Crime Story as a bit of a disappointment. Overall, the technical qualities are above average, and the packaging is unique, but the special features are severely lacking. I would recommend catching this show on FX or On Demand platforms, and making a purchase if you really enjoy it and are a TV completist who will want Season One to go with the future seasons, and with the great packaging, it will have a lot of shelf appeal. You can find American Crime Story: The People v. O.J. Simpson on Amazon or at retailers everywhere.