Gene Kelly was the embodiment of the American musicals that soared to their greatest heights in the 1940s and 50s. A handsome man, the characters he played were always smooth talking, energetic, and a little rough around the edges. For his time, he was the perfect man; he could sing, dance, act, and choreograph at a time when studios like MGM banked heavily on extravagant musicals to fill out their profits each year. He was able to throw his weight around and eventually land firmly into the director’s chair, steering the ship of massive successes such as On the Town, and later Singin’ in the Rain with co-director Stanley Donen. Their massive success as partners would result in a string of movies that culminated in a final film, It’s Always Fair Weather, in 1955, after which they would never work again as equals, just competitors. 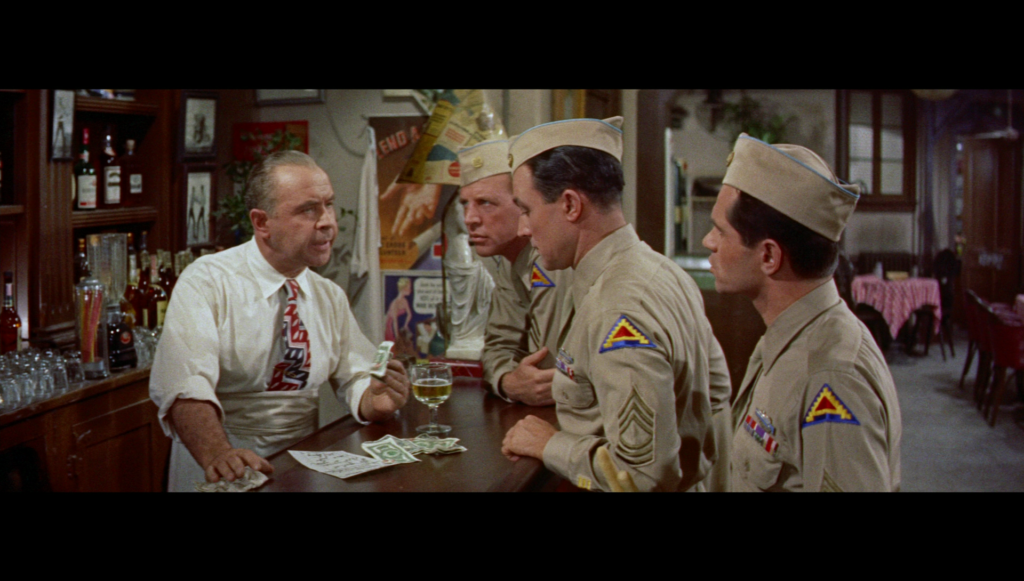 It’s Always Fair Weather kicks off right after the end of World War II, as three friends, Ted, Doug, and Angie struggle to return to civilian life. They spend their days and nights drifting in and out of bars in New York City, awaiting their release from active military duty. Once that day comes, the swear at a favorite bar of theirs, that in ten years, they’ll reunite to celebrate their friendship. Unfortunately, ten years pass, and although they meet up in that fateful bar, they find that not only do they not recognize each other anymore, they’ve become lifeless, unhappy people during the last decade. After awkwardly dining at an upper class establishment, the three of them are unknowingly courted through a series of elaborate song and dance numbers into becoming guest stars for a famous television program, one which erupts into a brilliant climax as reality chases the trio through the city. 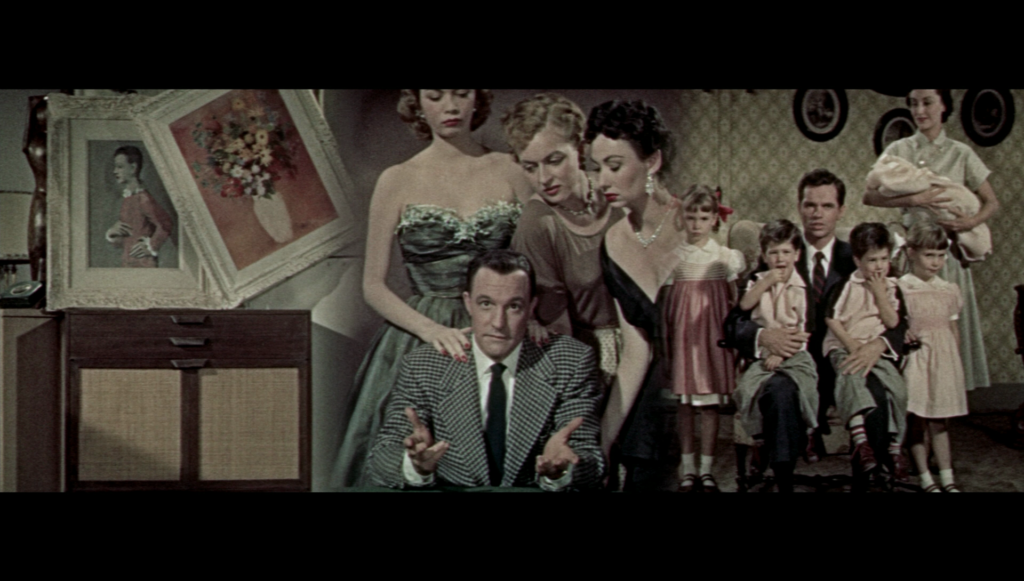 Fair Weather is unusual for a musical of this era; it’s caked in realism, regret, and an overall air of unhappiness. It seem out of place in a musical movie full of elaborate song and dance numbers, and maybe that’s why it works so well. Unlike many musical movies, in which guy always gets the girl, and most of the characters happily dance through life, It’s Always Fair Weather showcases the dreary side of life. It’s about three wide-eyed guys, fresh from military service who realize that the world isn’t theirs for the taking. It’s about three friends who realize that time has molded them into the people they’d always hated in their youths, and the difficulties they face in reconnecting with one another after ten years apart. It’s the polar opposite of the kind of films you’d usually associate Gene Kelly with; stuff like On the Town, and Singin’ in the Rain. It’s mature, and less of a fantasy than his previous works – perhaps that’s why it was a financial disappointment upon its original release in the 1950’s. 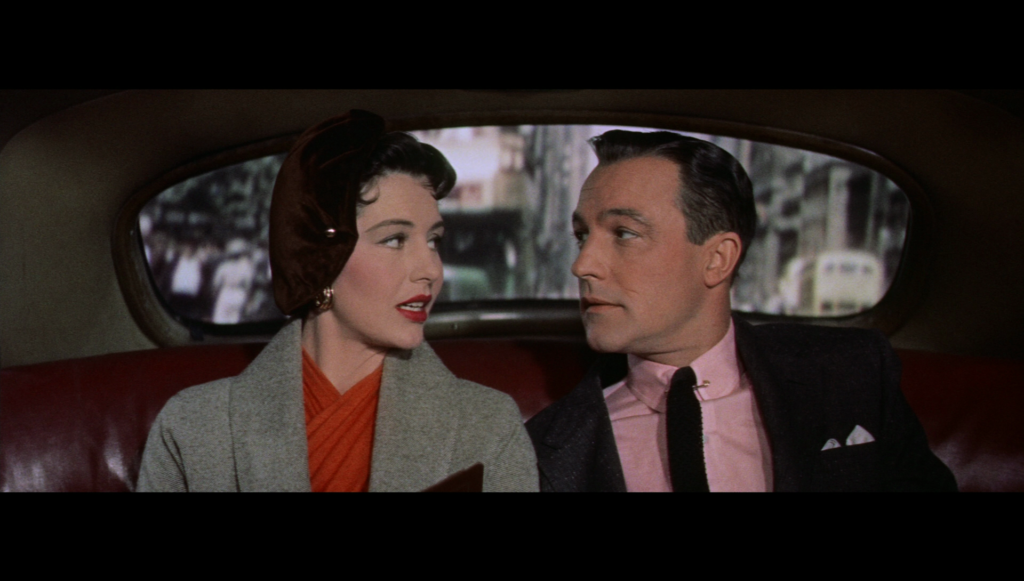 And yet, for how downtrodden and upsetting it can be to face the reality presented in It’s Always Fair Weather, it features some of the most entertaining and large scale song and dance routines that Gene Kelly and Stanley Donen ever concocted for the big screen. Forced to use Cinemascope by the producing studio, MGM, the pair decided to go big in order to fill the wide 2.55:1 aspect ratio of early Cinemascope. Many of the dance sequences are filled with tons of background actors, and pull the camera back to reveal excellent set design and give new amounts of breathing room for the choreography to allow for elaborate movements. Even in smaller, more intimate character dances, such as the leading trio’s dance number at the beginning of the film, the width of the frame allows for each actor to comfortably dance in their own space on the screen, leading to some spectacular on screen dancing. A number of creative split-screen techniques and optical compositing techniques are applied on a regular basis to shift focus, and display unique character perspectives that even today feel fresh. 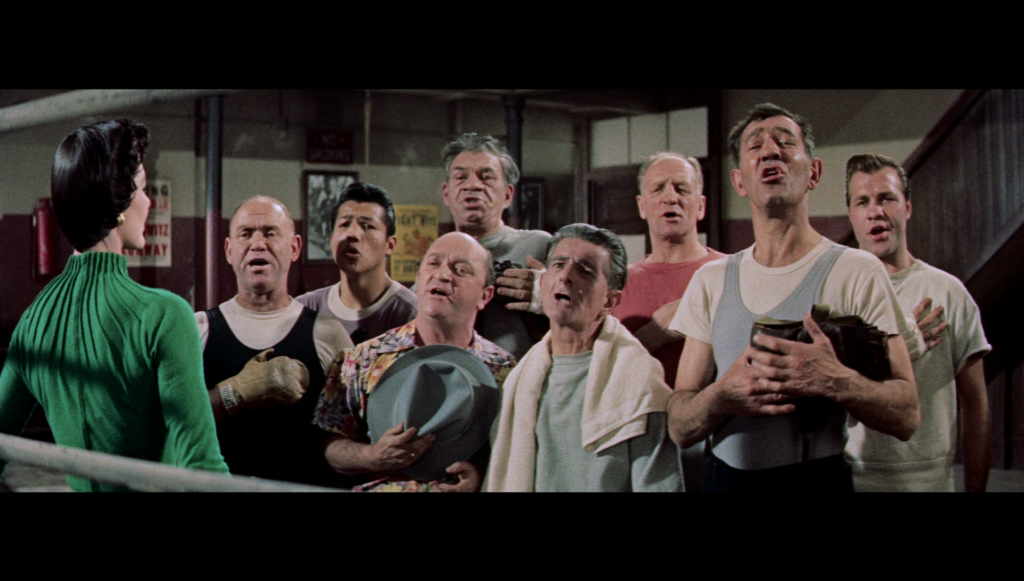 It’s Always Fair Weather, although seemingly pushed aside by Kelly’s more prolific and more profitable works, is worthy of reassessment by modern audiences. It’s one of the few movie musicals from MGM’s golden age of musicals to produce something that breaks from the mold by presenting a trio of lead character who are heavily flawed, and a taste of romance that doesn’t overwhelm the story as it charges forward. It doesn’t feel drowned in convention, but still has room for a bit of goofy indulgence. It holds up well, and is well worth your time.

It’s Always Fair Weather was shot on 4-perf 35mm film with the original Bausch and Lomb Cinemascope 2x anamorphic lenses for a native aspect ratio of 2.66:1. Because the original release prints utilizing a 4-track magnetic stereo soundtrack, the aspect ratio was slightly reduced to 2.55:1. For this release, Warner Archive has presented the film in 1080p resolution, maintaining the original 2.55:1 aspect ratio. 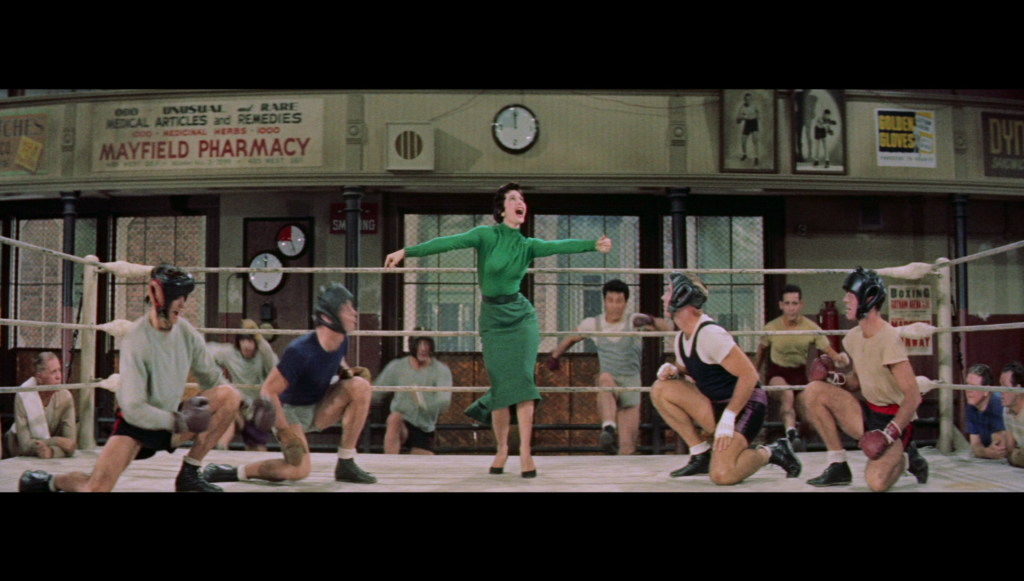 It’s always tough to judge the early Cinemascope features. The optics produce all sorts of fun distortions on the edges of the image area, and close ups lose the anamorphic effect entirely, resulting in a complete lack of close-ups to reduce the awkward image it would produce in projection. To compound all of these issues, Eastman Kodak single strip color film stock of the era was pretty terrible, especially when you cut the horizontal resolution effectively in half, resulting in most of these features looking pretty low res and pretty grainy in playback. 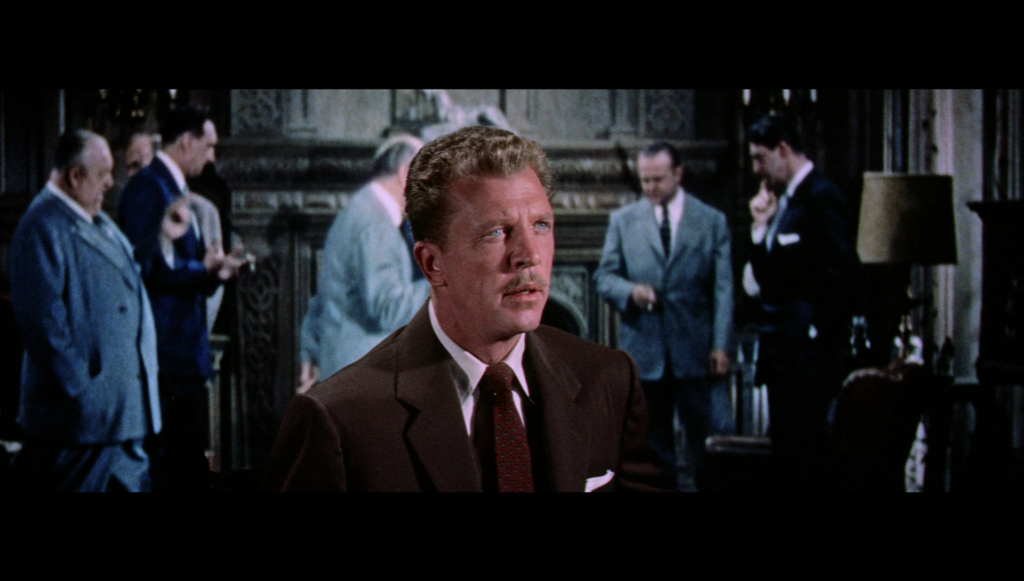 It’s Always Fair Weather is not above these issues. Although the print is beautifully cleaned, it is fairly grainy, and for the most part color never really pops, resulting in a pretty dull image. Costumes, especially Cyd Charisse’s dress during the gym song and dance sequence, look good, but pale in comparison to the 3-strip technicolor features from the same time period. Wide-shots reveal the full grandeur of the Cinemascope process, as Kelly and Donen fill the frame with tons of movement and action that resolve well, but never really feel sharp. Detail is average, and looks par for the course for these early scope features. Grain ramps up and detail drops sharply during the film’s many optical composites and split screens. Unlike many digital restorations, It’s Always Fair Weather feels authentic, in that it is unashamed to embrace all of the unique qualities and issues that were inherent to those classic Bausch and Lomb anamorphic lenses. For that, I have to give Warner Archive the utmost of commendations for their efforts.

It’s Always Fair Weather was originally presented in 4-track Magnetic Stereophonic Sound in theaters. For this Blu-ray, the original 4-track mix has been remixed into 5.1 DTS-Master Audio surround sound. 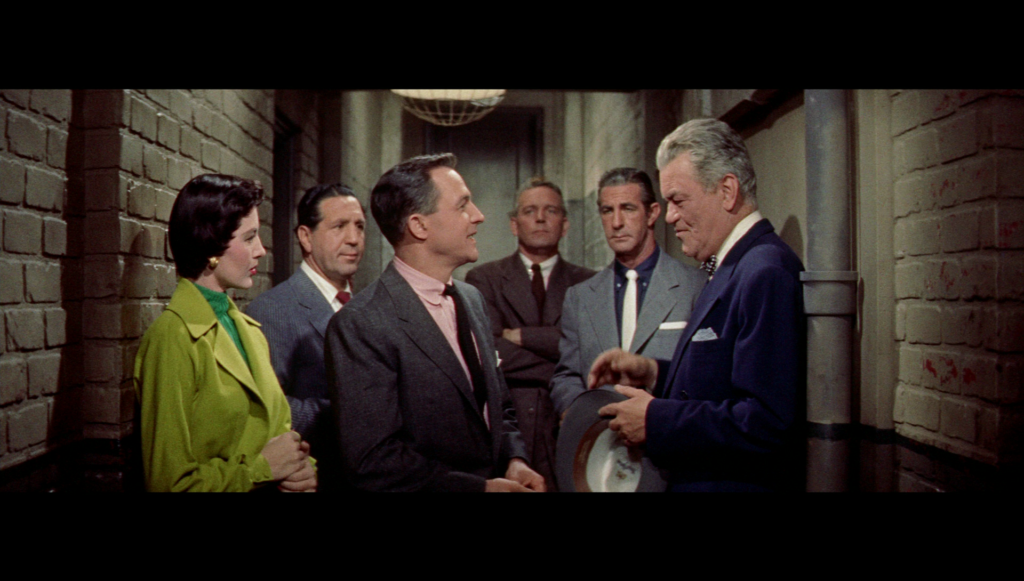 Much like early Cinemascope presentations were somewhat awkward, so is the audio presentation of It’s Always Fair Weather. During the song and dance sequence, the sound is downright incredible; it fills the soundstage and makes effective use of the surrounds to make you feel like you’re stuck in the middle of these elaborate musical sequences, demonstrating the power of the 4-track mix. Sometimes however, during regular dialogue sequences, the dialogue panning is kind of awkward and jarring. I am all for dialogue and sound effect panning, something I feel modern films have shied away from, but in the case of It’s Always Fair Weather it just sounds unnatural on occasion as dialogue weirdly cuts from one speaker to the next rather sharply. It doesn’t happen often, but when it does, it is extremely noticeable. Other than that, this film sounds fairly good in this presentation.

It’s Always Fair Weather is presented on home video by Warner Archive in a standard Blu-ray case. The front artwork features a reorganized presentation of the one of the film’s posters which features the three male leads and the two female leads surrounded by music notes underneath the film’s title and a tag line. The back artwork features a few shots from the film next to a couple of paragraphs about the film, a review quote, a list of features, technical info, and credits. Overall, nothing special in the packaging department. 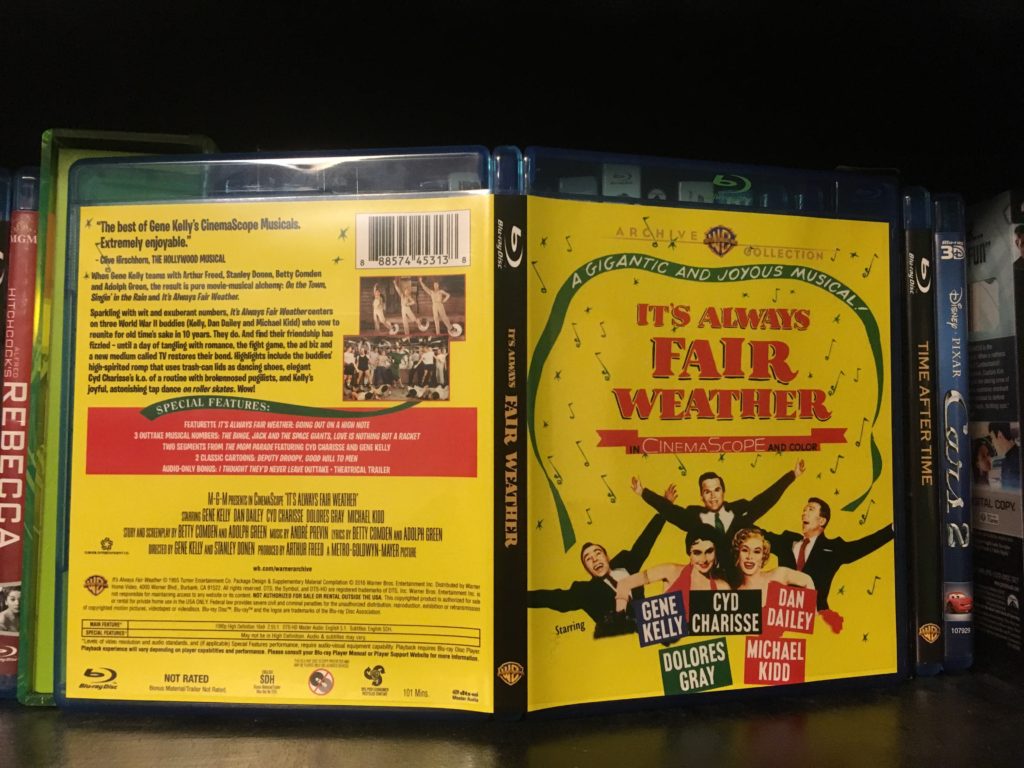 Onto the special features:

It’s Always Fair Weather: Going Out on a High Note – a 16 minute feature surrounding the production of the film, and the context under which it was made.

MGM Parade: Excerpt from Episode 2 with Gene Kelly – a 5 minute promotional video from the set of It’s Always Fair Weather from the MGM Parade television show for the film’s release.

Deputy Droopy – a Tex Avery cartoon featuring Droopy the Dog. The sound quality sound muffled and off, making it a difficult watch.

Good Will to Men – a Hanna and Barbera cartoon animated in Cinemascope that warns us of the impact of our constant warring by examining it through the lens of a mouse telling the stories of our own destruction.

Outtakes – 4 song and dance numbers cut from the film, with rough audio and missing dialogue. One song, “I Thought They’d Never Leave,” is audio only. 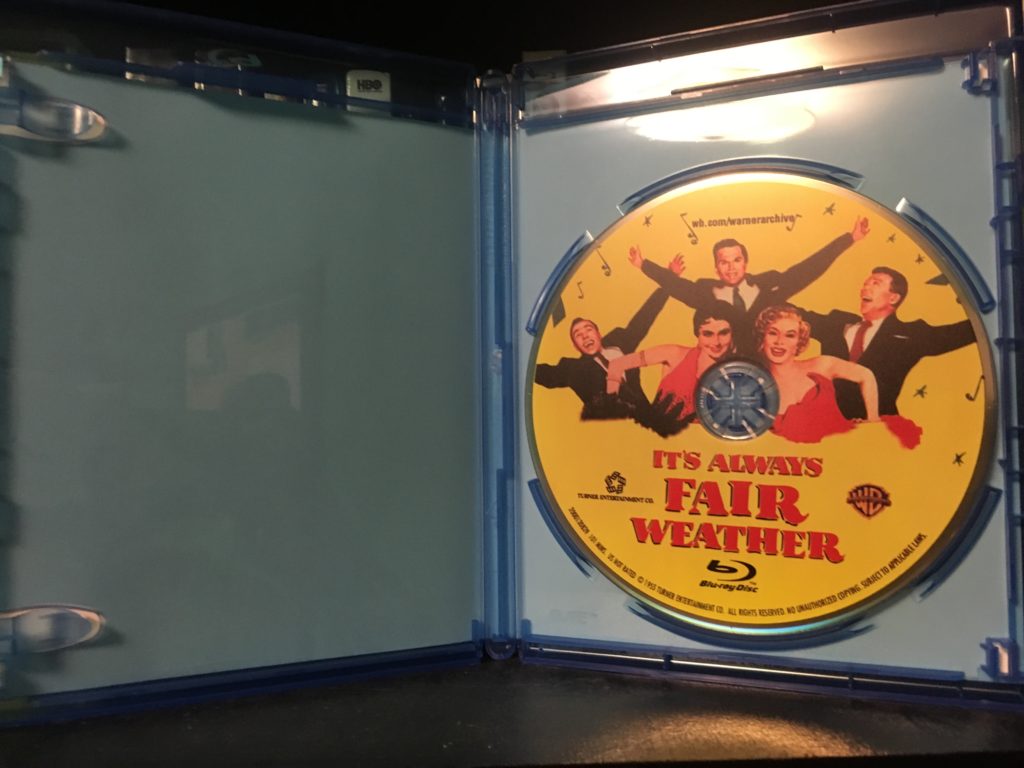 The packaging might just be serviceable, but It’s Always Fair Weather features a great set of extras, with a couple of really cool cartoons to sweeten the deal. 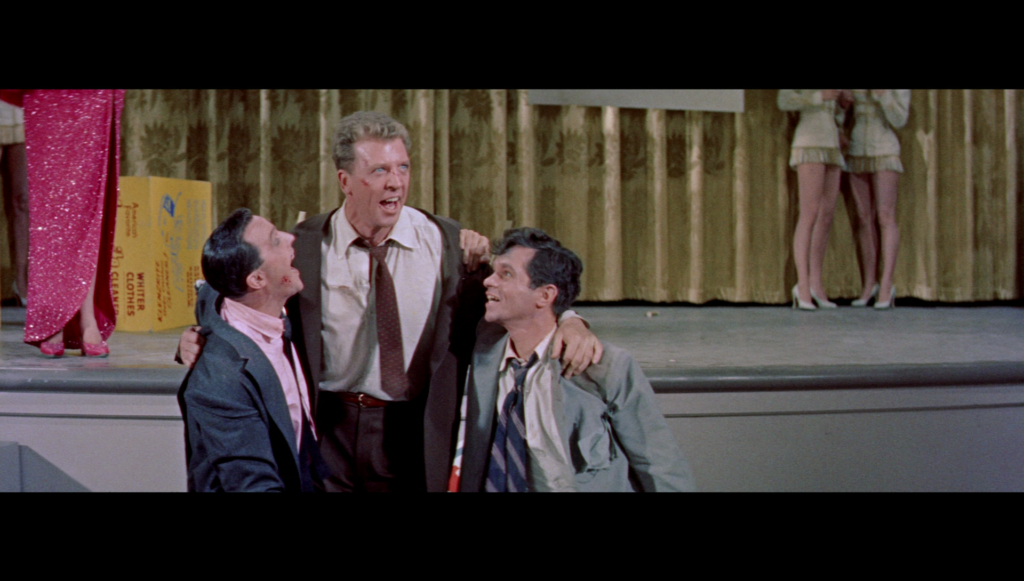 It’s Always Fair Weather isn’t all about fair fun, but it has a great script full of great character moments, and some of the most creative dance numbers Kelly and Donen ever committed to film, full of creative applications of the Cinemascope process, and wonderful choreography and music. It’s release from Warner Archive couldn’t make for more perfect timing, with upcoming release of Damien Chazelle’s La La Land, which looks like it could possibly share some of Fair Weather’s light taste for melancholy and creative use of the scope frame to provide a fresh take on the movie musical. Warner Archive’s Blu-ray release features an authentic video presentation, decent audio, and a nice helping of extras to make this the definitive release of the film on home video. Recommended.