Robert Zemeckis is the man. Between 1980 and 2001, he could do no wrong. Every movie he directed, including classics such as Used Cars, Back to the Future, Who Framed Roger Rabbit, and Forrest Gump were clever, well made, engaging experiences. He used the screen to maximize enjoyment, and emphasize the best aspects of escapism the movies could offer, whether it be soaring through time in a Delorean, losing Tom Hanks on an obscure island, or romancing the stone, he exercised a mastery of the popcorn movie. Unfortunately, his reign came tumbling down in miserable fashion, with a series of box office misfires due to his drive to perfect motion capture 3D animated films resulting in a near total failure. After nearly a decade exploring what computers can do, he made his return to traditional filmmaking with movies like 2012’s masterpiece Flight, and and 2014’s highly underrated The Walk. He returned to the director’s throne last year for another potential blockbuster hit, one which pit Hollywood legend Brad Pitt against the British military in order to prove his wife innocent during the darkest hours of World War 2. That film is Allied. 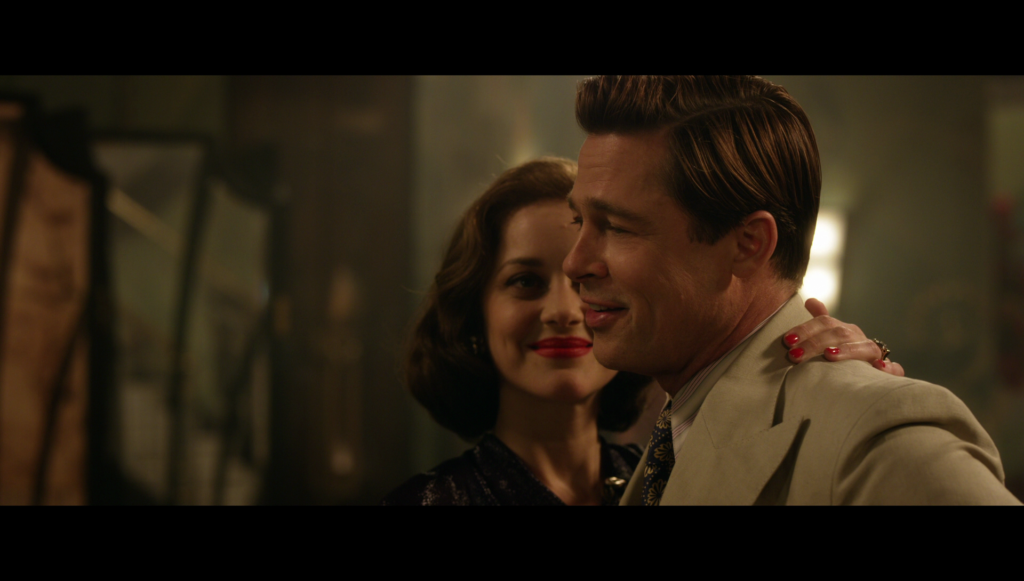 Allied drops us straight into the lives of Canadian intelligence and French resistance members Max Vatan and Marianne Beausejour as they form a team to take out a German ambassador to the Moroccan city of Casablanca during World War 2. Already well acquainted with the city and its elite, Marianne shows Max the ropes as they poke and prod at each other to determine their limits. Succumbing the the pressures of unbearable sexual tension between each other, they engage in a romance, carrying out their mission and returning to England where they are quickly married. Shortly after, they start a family and try their best of survive the horrors of the The Blitz of London while Max continues working for British intelligence in an effort to save France from the Nazis. However, in the midst of his happy marriage, Max is informed by his superiors that his wife has been suspected of German espionage, and that they require 72 hours to fully confirm their suspicions. Determined to save the woman he loves, he embarks on a quest to prove her innocence, stopping at nothing to clear her name. 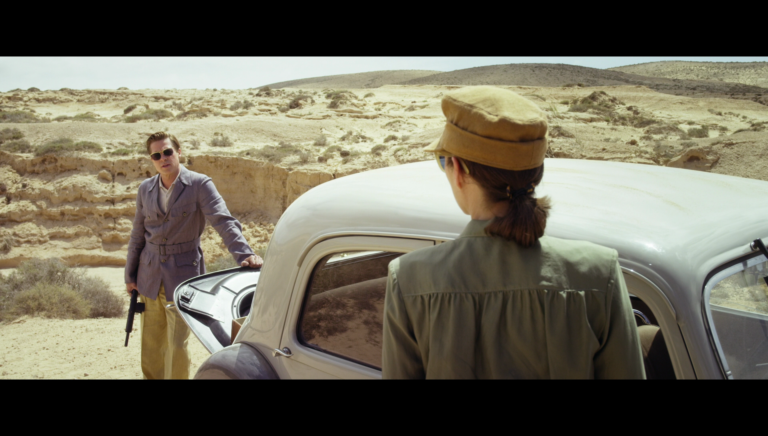 Written by British screenwriter Steven Knight, best known for is work on films such as Locke and Burnt, Allied is a slow burn that insists on doing everything possible to drag such an interesting premise through the mud, resulting in an extremely disappointing viewing experience. It constantly teases us with glimpses of action and excitement, which any good spy thriller should be filled to the brim with, only to space them out with scenes of poorly executed romance and awkwardly uneven pacing that makes everything start way too fast, and then just sort of lazily tumble to the finish line. It’s first act, which takes place in Casablanca, one of motion picture’s most famous cities, should be charged with romance and intrigue. Instead, through poor Knight’s poor writing and Zemeckis’s questionable directing, it ends up feeling uncomfortably cold, and when Max asks for Marianne to come back to London to be his wife it feels unearned and incredibly contrived. It continues to feel forced and awkward as the film charges into its main storyline about Marianne’s potential betrayal to Britain, and continues to feel that way as the credits roll. 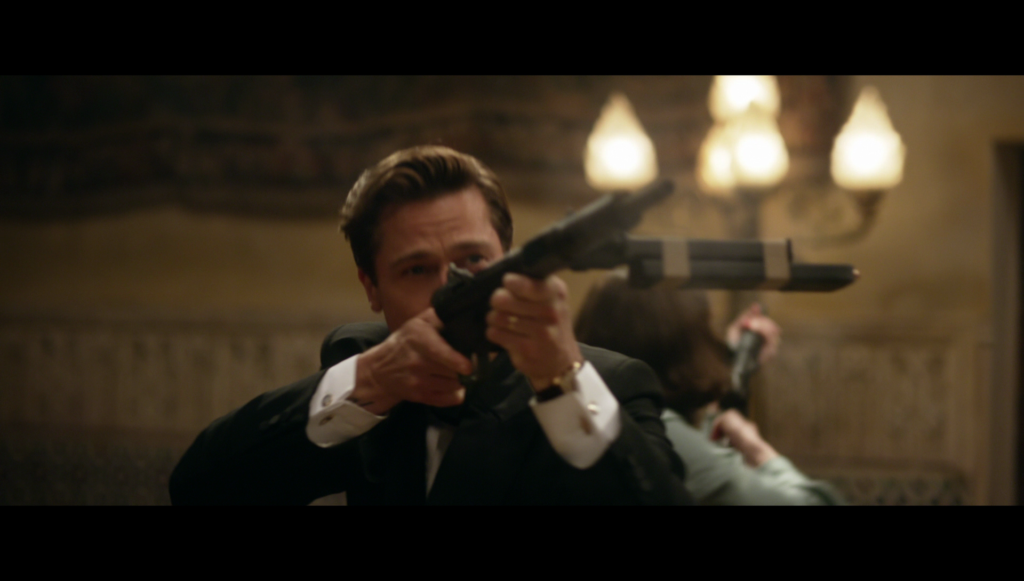 What’s even more impressive than the film’s underwhelming script and direction is how little chemistry Zemeckis manages to coerce out of Brad Pitt and Marion Cotillard as the film’s leads. Pitt could not seem less interested in the material, coasting on the minimum amount of fumes required in order to deliver his lines. Cotillard tries to carry the weight of the screen relationship, but without Pitt’s mental presence to pick up what she’s laying down, it just falls completely flat. It made their dilemma, which should have built into a tense, action filled race to prove Marianne’s innocence play out with all of the intrigue of soggy oatmeal. 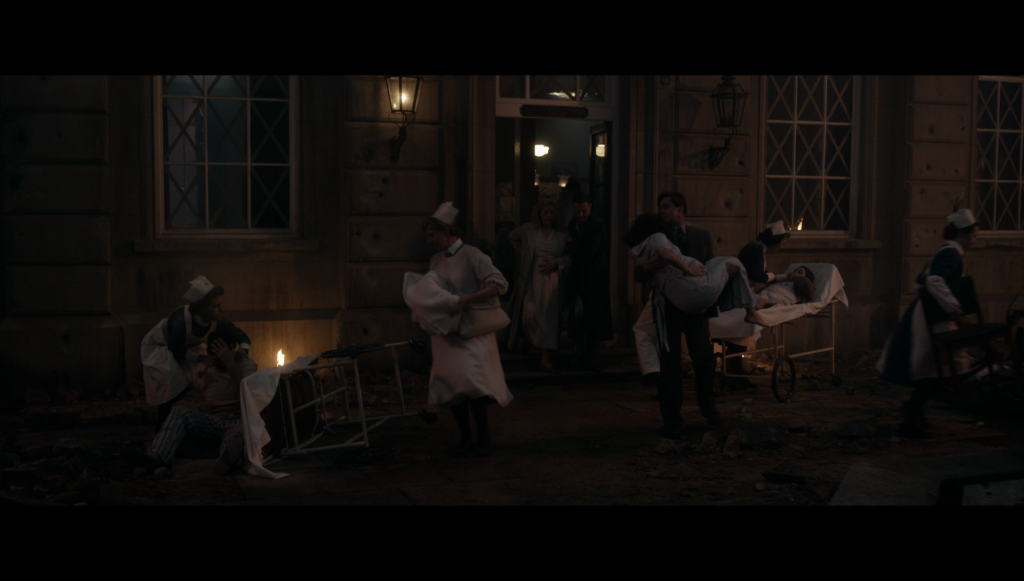 All that aside, the film oozes with phenomenal production value, recreating the streets of war torn London with the utmost of style. It’s period accurate costumes were spectacular enough to warrant an Oscar nomination, and it’s sets are riddled with detail, from the lavish party set in Casablanca, to the raggedy old staircase that Pitt walks down to meet with his superiors. The few action scenes that ended up in the film explode off the screen in masterful style, teasing us with the potential this film could have become it the full force of Zemeckis had been unleashed, with spectacular renderings of the Blitz over the skies of London that do an excellent job of giving an impression of just how horrific the Germans were to London during World War 2. 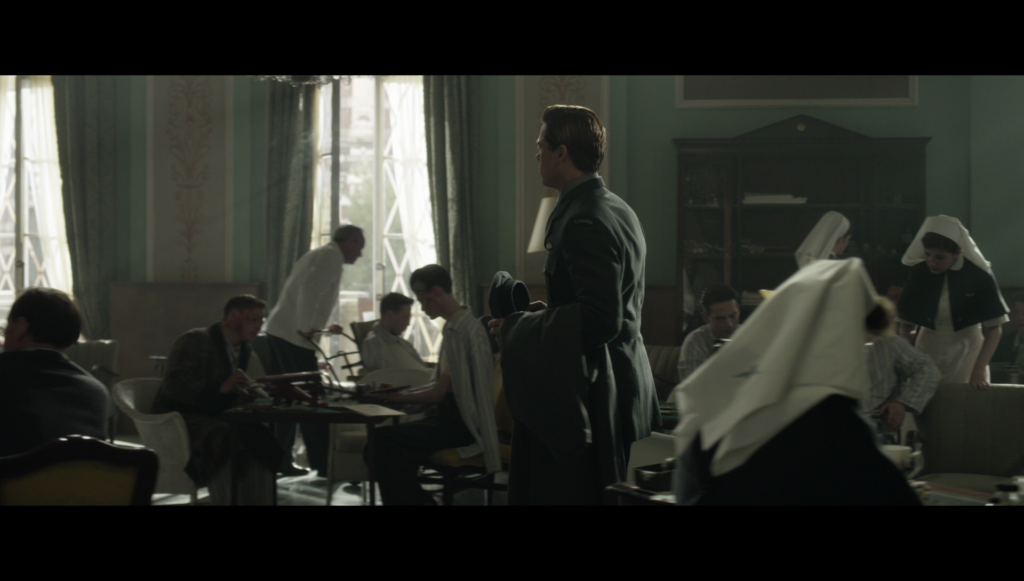 I can’t think of much else to say of any merit – I wanted to like Allied, and I went in with high expectations after the high quality of Flight and The Walk. Now I just have to find something to wash the bad taste this movie left in my mouth out. I used to have a saying, “In Zemeckis we Trust,” because of how consistent his quality is with live action material. I oughta rethink my sayings. 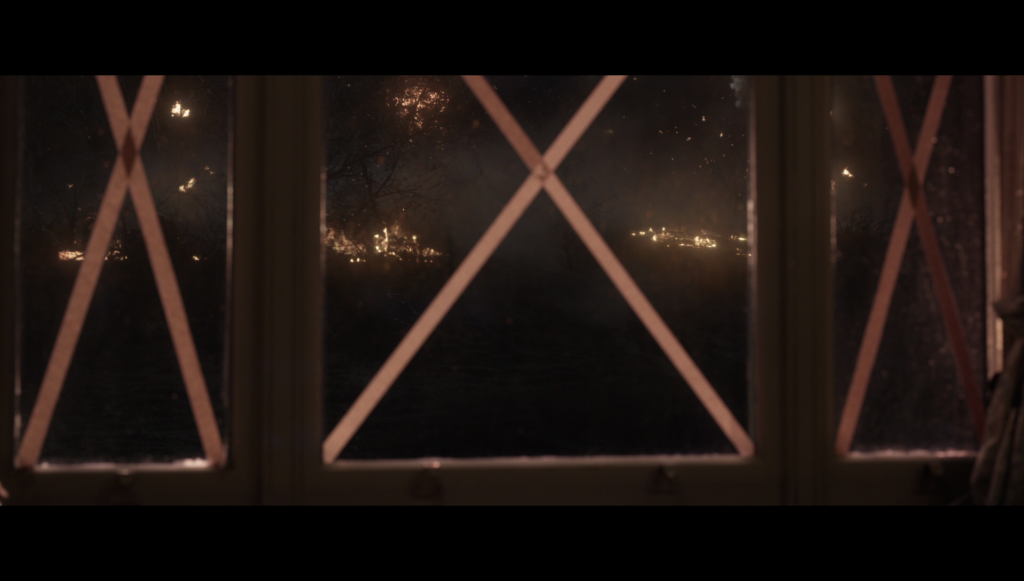 Allied is a cold, dark, war movie. As a result, many of its scenes take place in near darkness, or in dark cramped rooms, caked in shadow. Luckily, this film has absolutely perfect black levels – when watched on my LG 4K OLED television, it was sometimes challenging to make out where the image ended and the letterboxing began. Select sequences are a bit too dark, but most of the night time raids and shootouts exhibit excellent contrast and do a great job of recreating the lighting style used through the film my cinematographer Don Burgess. Skin tones are mostly rock solid, although occasionally Marion Cotillard looks as if she’s sat in an ice bucket for a few hours before camera rolled. Detail is phenomenal, revealing a brand new, hardened and well aged side of Brad Pitt in close ups and mid shots like you’ve never seen him before. CGI, especially during some of the film’s early scenes is often soft and resolves oddly, and many of the film’s wide shots fall into the soft range of the spectrum when viewed in 4K UHD. For the record, I noticed no digital noise or video artifacting through the film’s two hour run time whatsoever, a credit to the camera and the team behind it. Allied has moments of brilliance when viewed in 4K, and is for the most part an above average HDR-enhanced experience.

Allied is presented on both 4K UHD Blu-ray and standard Blu-ray in 5.1 DTS-Master Audio, in English and French with English subtitles. 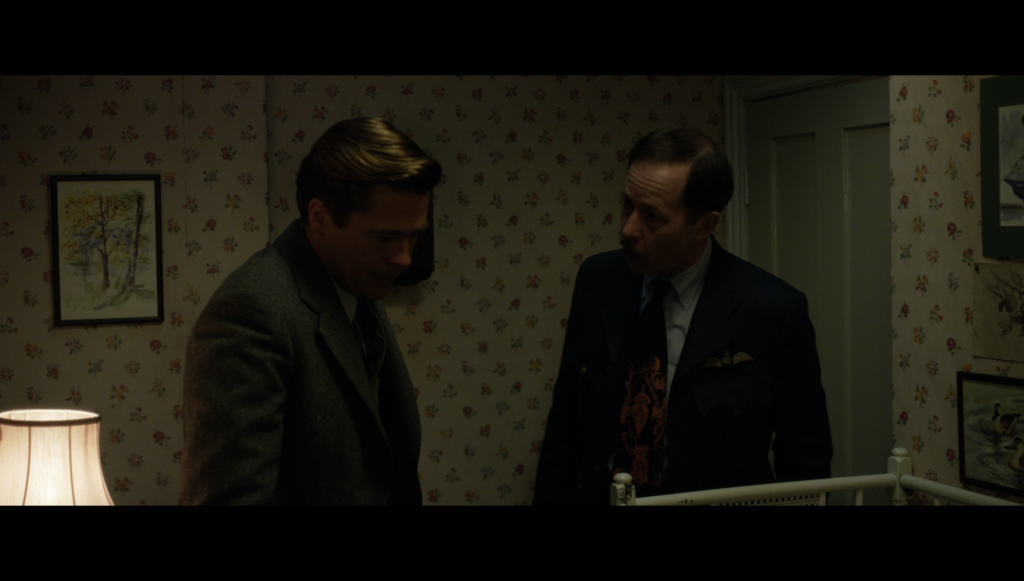 Much like the film itself, Allied has a very restrained soundtrack when played back in the home. Outside of a few extended gun battles, most of the film is extended sequences of dialogue without much in terms of world interaction. Subwoofer activity is surprisingly tame, even during the sequence where the Germans rain hell down upon London with bombers, and the film’s soundtrack score, while present, never really does anything fancy. Surround activity is about what you’d expect, roaring to life when guns go blazing, but is fairly minimal otherwise.

Allied, released to home video by Paramount Home Video, is packaged in a standard Blu-ray keepcase and accompanying slipcover, in the traditional 4K Ultra HD Blu-ray black case. The front artwork for both the slipcover and case feature Brad Pitt at the forefront, with Marion Cotillard standing behind his right shoulder, over the two of them walking away from a burning car in Casablanca. The back of the slip cover features the two of them spending time on the roof in Casablanca under a review quote and a paragraph about the film, above a few action shots of the two leads, and a list of features and credits for the release. The back of the keepcase features a slightly rearranged version of the same design, minus the three action shots. A typical, by the numbers packaging job from the team at Paramount. 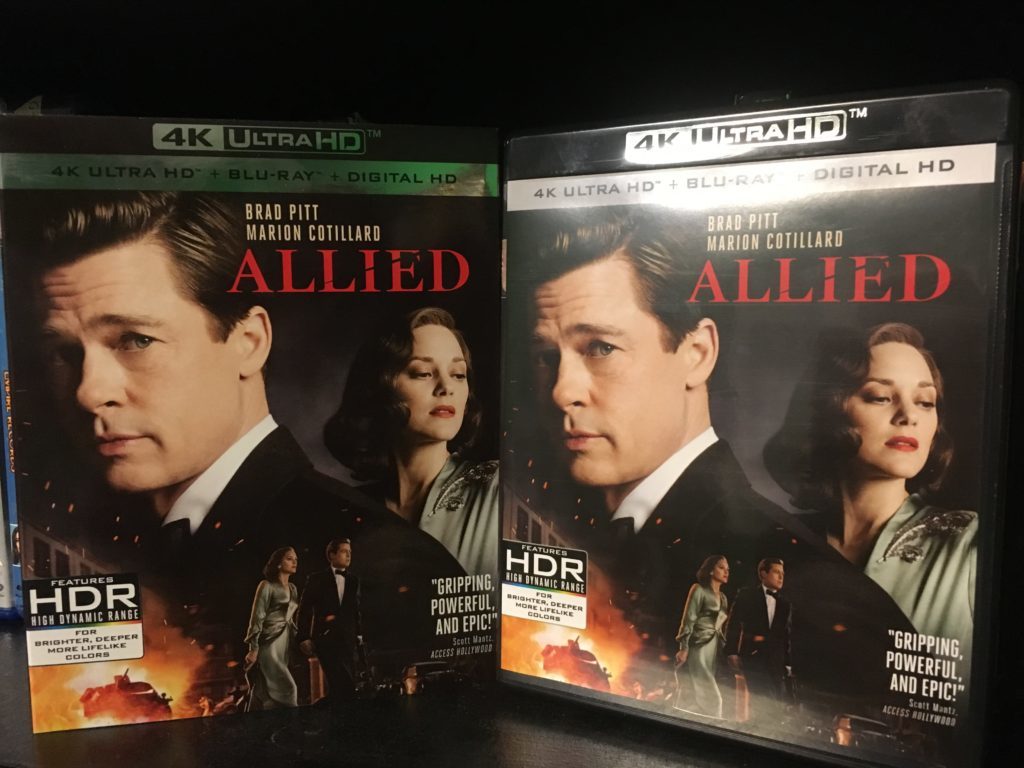 Onto the features, which are located exclusively on the Blu-ray disc of this combo package:

Story of Allied – a 5 minute feature that explores the origins of the film’s screenplay, and the context surround the era in which the film is set.

From Stages to the Sahara: The Production Design of Allied – a 10 minute feature that explores how they worked on the sets, trying to infuse the film with a sense of romance as well as a dedication to the period in which it is set.

Through the Lens: Directing with Robert Zemeckis – a 9 minute feature on working with Zemeckis on set, featuring interviews with many of the film’s major players, and tons of behind the scenes footage from making the film.

A Stitch in Time: The Costumes of Allied – a 9 minute feature which explores the work of Academy Award nominated costume designer Joanna Johnston, and the work she performed to recreate the world of the 1940s war era. 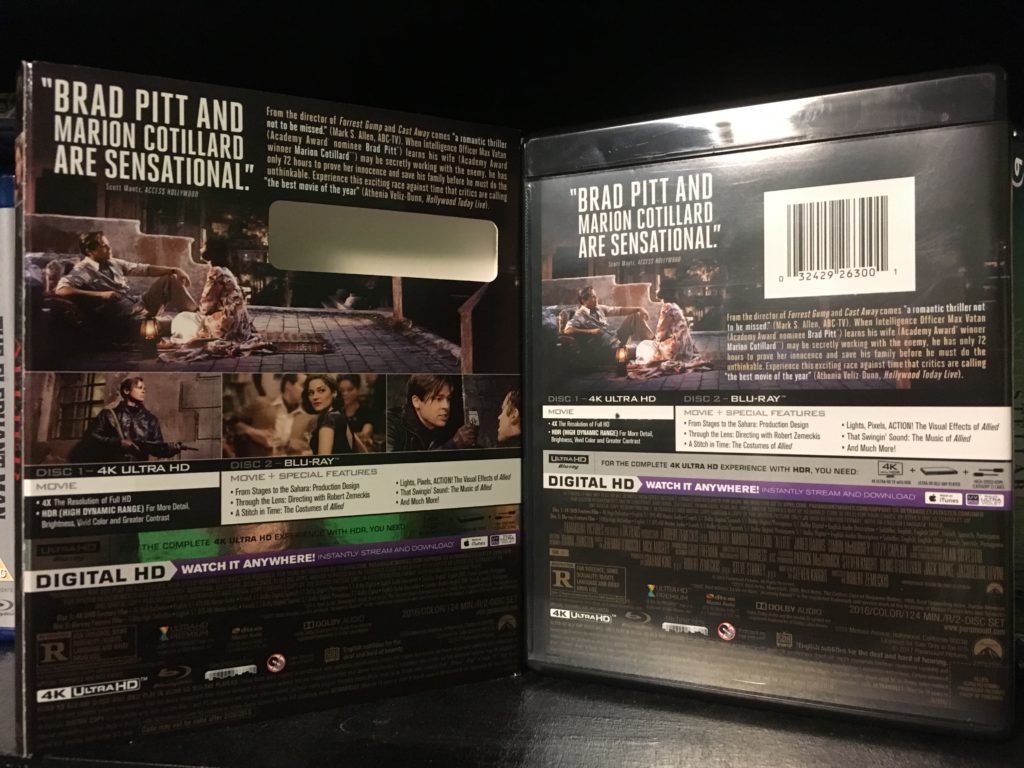 Til Death Do Us Part: Max and Marianne – a 6 minute feature about the two lead characters, and the decisions that led to the casting choices and how each feature player acted in the roles.

Guys and Gals: The Ensemble Cast – a 5 minute feature about the supporting characters in the film, and the actors and actresses who played them, including Lizzy Caplan and Jared Harris.

Lights, Pixels, Action!: The Visual Effects of Allied – a 9 minute feature on how the visual effects of Allied were designed and implemented. Includes a detailed look at set extensions, and the use of practical props and effects during the production.

Behind the Wheel: The Vehicles of Allied – a 3 minute feature on the various period accurate cars and planes that were used through Allied.

Locked and Loaded: The Weapons of Allied – a 3 minute feature on the period accurate guns that were used to carry out the action in the film.

That Swingin Sound: The Music of Allied – a 7 minute piece on the recording of Alan Silvestri’s score, and how it was written and used in the film. 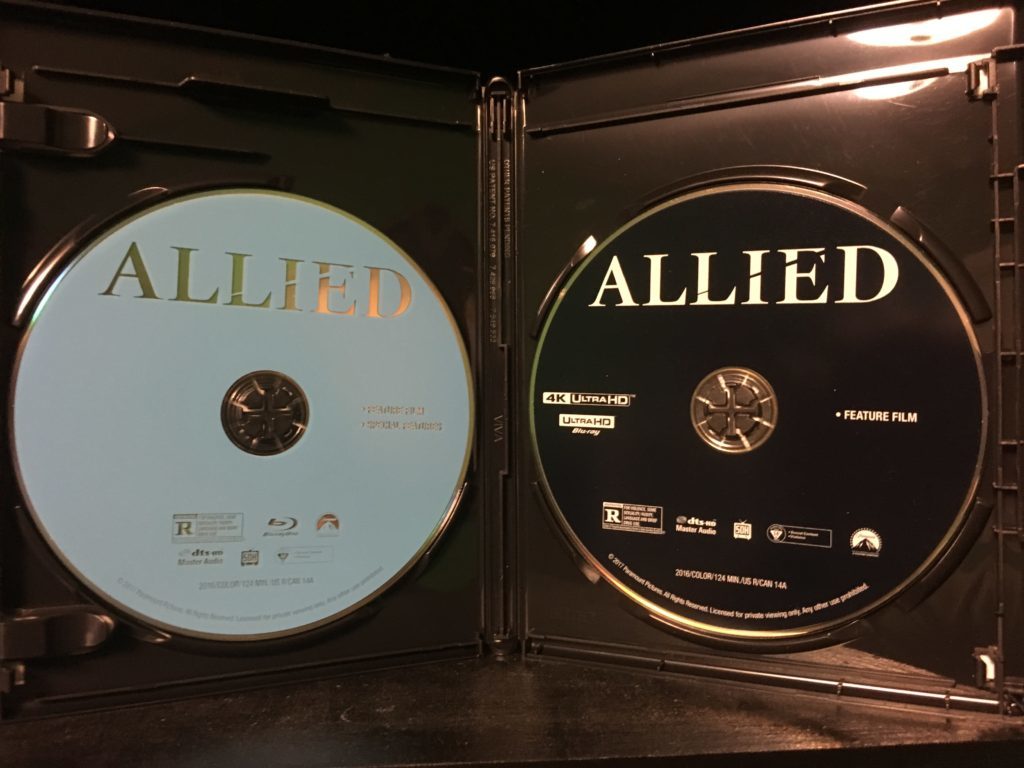 What? Real, honest to god extras on a major studio release? Sign me up. I am all for this. This was great. Please do this again soon. PLEASE. Also, the packaging was decent. BUT EXTRAS! 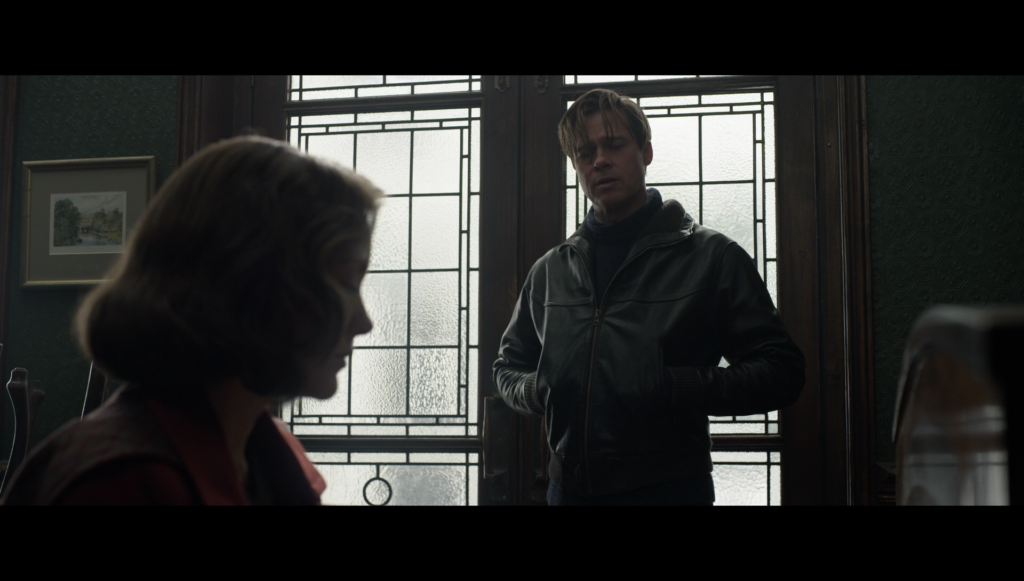 I didn’t care too much for Allied when the credits rolled. I found it difficult to invest in the blossoming love between our two leads, and the drama that ensues when they get married seems so contrived and unfulfilling that no matter how many gun battles you tossed in, I don’t think I was going to enjoy it. It’s a shame too, because I know there’s a tense, exciting, and engaging war film out there for my man Robert Zemeckis to make. This just wasn’t it. Regardless, Paramount Home Video has done a wonderful job bring it to home video, with a mostly excellent 4K UHD video transfer, serviceable audio, decent packaging, and a plentiful selection of interesting extras for fans of the film. Serious film fans will probably go elsewhere, but if you’re looking for a decent set of extras and a solid 4K transfer, you might want to check this one out.