All The Way is the latest HBO Original Movie from Director Jay Roach (Game Change), and it features Bryan Cranston as President Lyndon Johnson, following his first, difficult year in office following immediately on the heels of John F. Kennedy’s assassination. All The Way features an excellent cast, with the talents of Anthony Mackie, who plays Martin Luther King, Jr., Melissa Leo, Frank Langella, and Bradley Whitford on full display. Of all of HBO’s fantastic original movies, All The Way is their finest to date, and has possibly the best performance of any TV movie ever with Bryan Cranston’s portrayal of LBJ. Cranston was nominated for an Emmy for Outstanding Lead Actor in a Limited Series or Movie, and I do believe that he is a lock for the award. With 8 Emmy nominations in total, All The Way should clean up at the awards show when it airs on Sunday, September 18th.

If you have an interest in American History, All The Way is a must-watch. The way that it explores the Vietnam War, the Civil Rights Act, and the tumultuous decade that was the 1960s is as good as any I have seen on film. By focusing on a single year, 1964, rather than trying to cram too much into 2 hours, All The Way expertly breaks down the politics of the era. 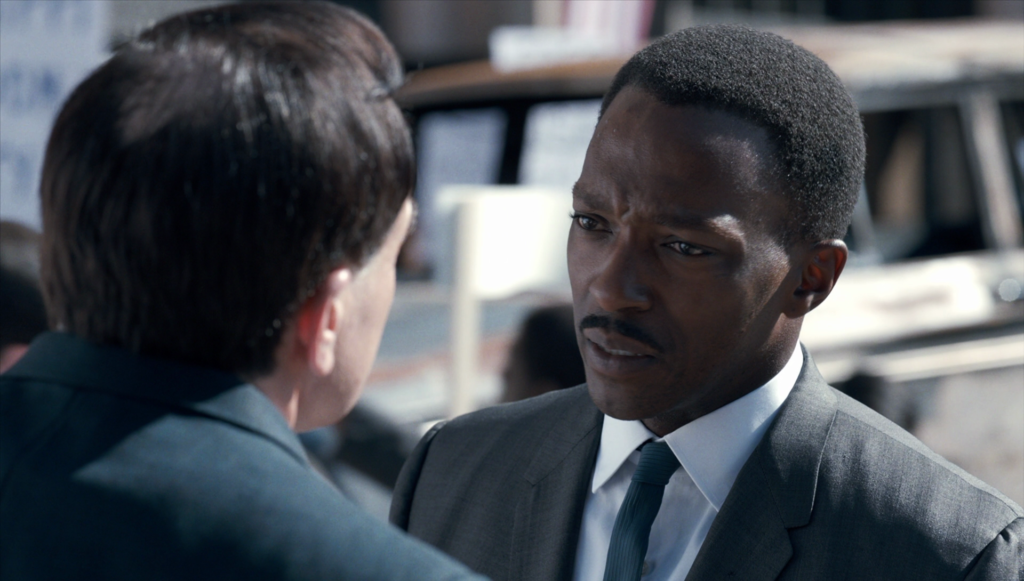 While Mackie does a fair job in a smaller role as Martin Luther King, Bryan Cranston delivered his best performance since Breaking Bad’s “Ozymandias” episode as Lyndon Johnson. Cranston had played the same role in the Tony Award winning play which this movie was based on, and he won praise from everyone in his command of the role. He doesn’t skip a beat in the film adaptation, as he continues to prove he has the widest range of any currently working actor, and maintains his reputation as one of Hollywood’s most respected talents. Cranston should easily take home the trophy, as he did so many times as Walter White. To be fair, Melissa Leo is also excellent as Lady Bird Johnson, the First Lady, and she is also a near-lock to win the Outstanding Actress award as well. Again, Leo proves her excellent range, as she transforms herself into yet another nearly unrecognizable role. HBO has hit a home-run with All The Way, and between dominating the TV movie category and the TV Drama category with Game of Thrones, HBO surely has a huge night ahead of them at the 2016 Emmys.

As I have stated in other HBO reviews, the video quality is great, but it has a different look than a traditionally shot Hollywood movie. There is definitely the “TV” look to All The Way, giving it a softer visual palette than a big budget feature film. All The Way was shot digitally on an Arri Alexa XT, as many Hollywood movies are, but there just seems to be a different feel. Call it the “HBO style”, but I don’t mind it – in fact, I think it is quite pleasing to the eye. 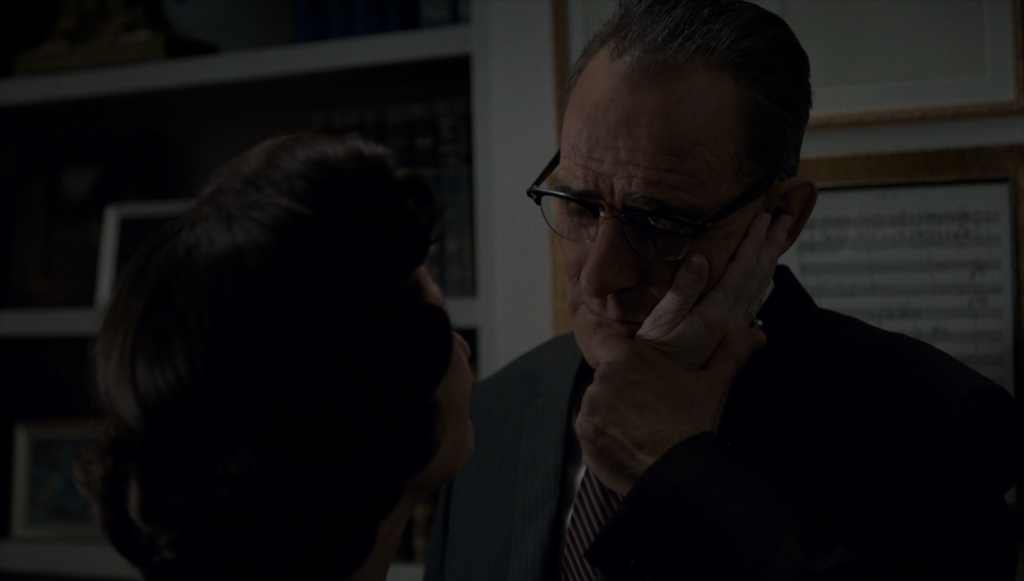 The “HBO style” can, at times, lend to a bit of digital noise, but it still looks better than many new releases. Darker scenes (as seen above in the screenshot) can have some issues with brightness and contrast, making it hard to tell what is going on, but it is a minimal issue, as most of the film takes place in brightly lit offices or in outdoor sets.

The audio for All The Way is solid, yet unremarkable. Featuring a DTS-HD Master Audio 5.1 track, it does make full use of the Blu-ray technology, and delivers a fairly standard audio experience. The film is almost entirely driven by dialogue, with little to no discernible action on any of the surround speakers. My center speaker from SVS did a great job delivering solid conversational audio, but only ambient noise flows through the left and right fronts, and little to nothing is produced by the rears. 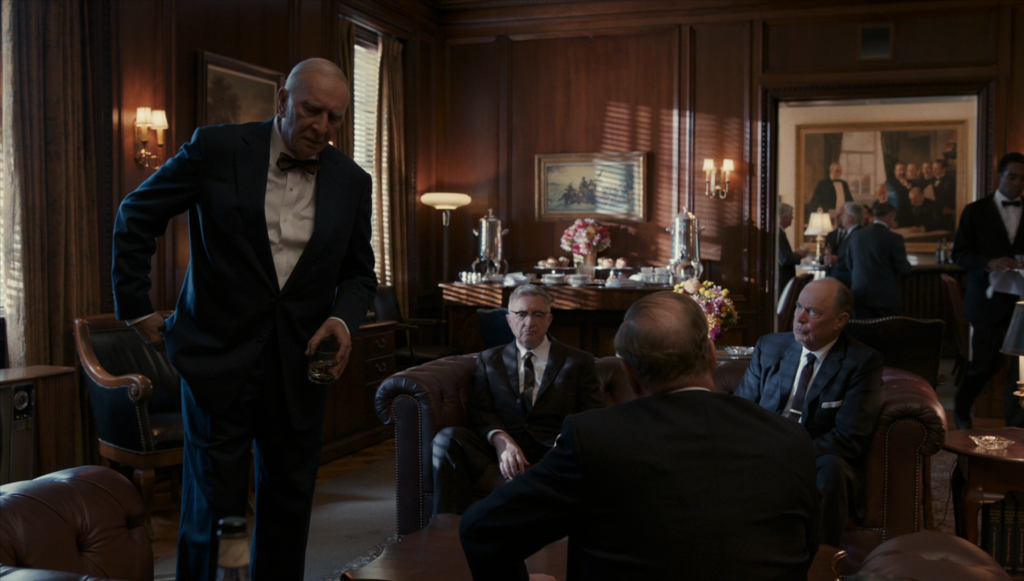 Honestly, you can probably get away with watching All The Way with a stereo setup, or even a soundbar, and do just fine. Your center speaker will need to be balanced correctly to get the dialogue across cleanly, and on a lesser system you will probably have to do a few volume adjustments. I still recommend using at least a 5.1 system for any at-home Blu-ray experience, but you can probably sneak by without it for All The Way since it does not offer a totally immersive audio experience.

All The Way comes packaged in a single disc eco-case, with the same cover art that has been seen on most of the film’s promotional materials, and a plain black Blu-ray disc. There is also a Digital HD copy, and an iTunes copy included with the release. Thankfully, unlike other releases from HBO, this eco-case seemed a bit sturdier and did not show the same amount of bend that other copies have had.

The special features are a bit limited, but still interesting. There are only two featurettes, “Bryan Cranston Becoming LBJ” and “All The Way: A Walk Through History”, but the both give great insight into the film. The feature on Cranston is especially interesting and provides an inside look into his dramatic transformation into this eventual award-winning role. 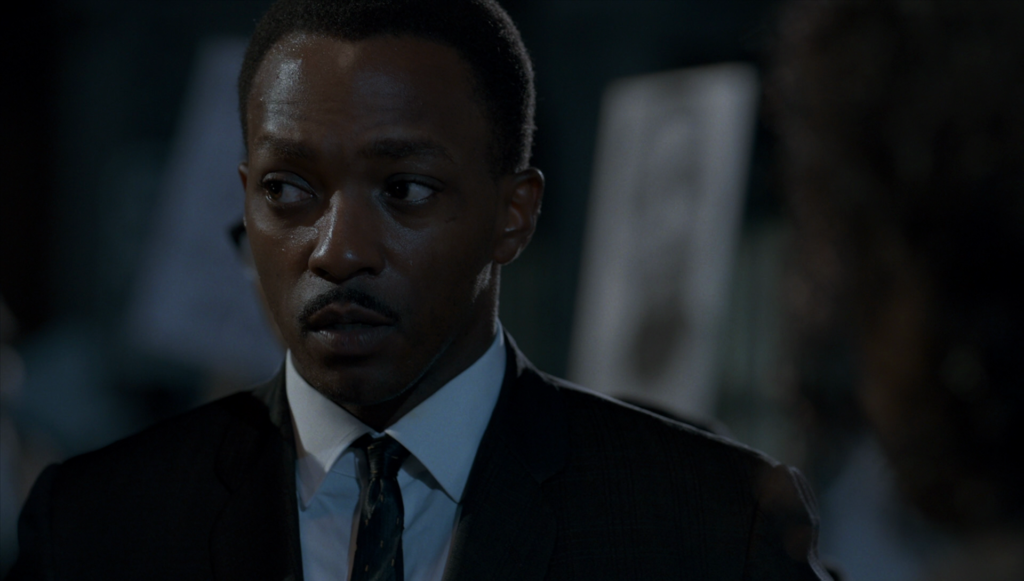 All The Way is another excellent addition to HBO’s long and successful history of creating original content, and it is a must-watch, especially ahead of the 2016 Emmys. However, I do not think it is a must-buy Blu-ray. I would say that if you have an HBO subscription, you can and should watch it there, and if not, a digital rental would suffice. When this drops in price after a few months it will be worth a pickup, especially for Cranston’s amazing performance, but if you continually pay for HBO each month, I’m not sure it is worth a purchase. For those who don’t have HBO, rent it, and if you enjoy it, pick it up on sale.