With legendary directors at the helm like Ridley Scott, David Fincher, Jean-Pierre Jeunet and James Cameron, it’s no wonder that the Alien films are memorable. Each one has its own style and way of telling the story of Ellen Ripley as she battles the never-ending fight against these terrifying creatures. When James Cameron’s Aliens was released in 1986, there was no way of knowing whether or not it would be successful enough to carry the series to another film or if it would be well received. Even after the subsequent two films that would follow, there was no way to know that Aliens would end up being the most iconic of the four. James Cameron may not seem like such a surprise to pioneer such a film now, (especially after being responsible for two of the biggest grossing films of all time) however, this film is just as important, if not more so, when looking at what Cameron can create. 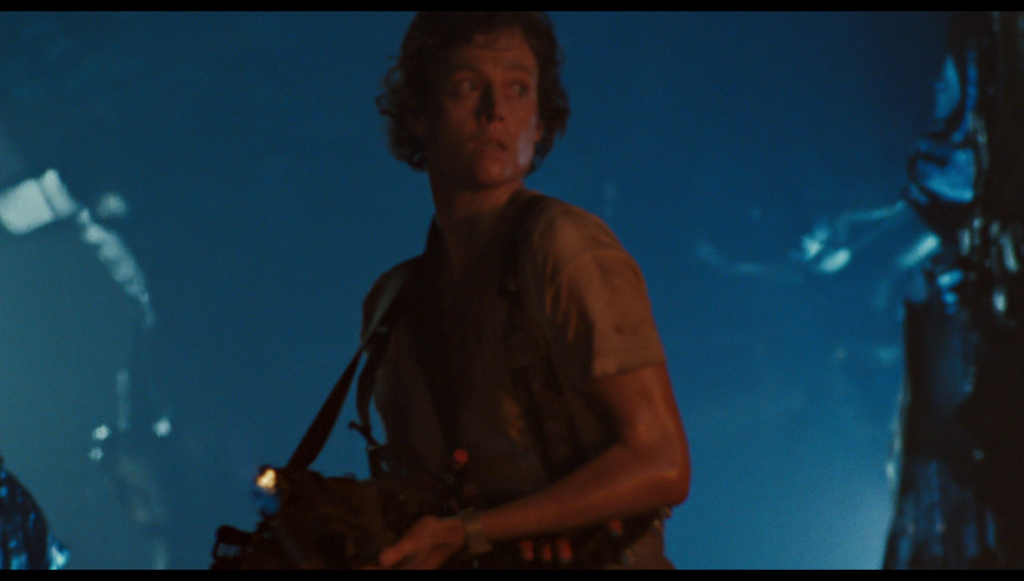 Aliens, like most Cameron films, stands alone amongst the films that surround it. If there is one thing that Cameron is known for it is big theatrical releases. In this regard, Aliens is no different. It is arguably the best of the four and, if nothing else, it is the one most people think of when someone mentions the series of films. It has been thirty years since its release and to this day it is still being talked about, made fun of (the true mark of success), and has never been replicated. Cameron took the original concept that Ridley Scott started and ran with it in a big way.  Everything seems a bit more personal, a bit bigger, and a lot more seems to be at stake. However, as the 30th Anniversary Edition is released the real question we should be asking is, does it still stand up to modern films and does it have a place on our shelves?

Our story begins right where we left off. Ellen Ripley (Sigourney Weaver), or just Ripley, is floating in space after having just defeated the alien threat that killed her crew and left her with no other option but to flee. We soon find out that Ripley has been in hyper-sleep for a long time, fifty-seven years to be exact. After pleading her case to “the company” she finds herself alone with no one to believe her story or aware of how real of a threat this attack was. During the proceedings, we find out that the planet where they found the eggs, has since been colonized and inevitably Ripley is asked to help lead a team of marines to eradicate any threat after all contact is conveniently lost. Ultimately, Ripley is forced to put her fears aside and work with the team to stay alive all the while trying to keep the one survivor of the colony alive, a young girl named Newt. 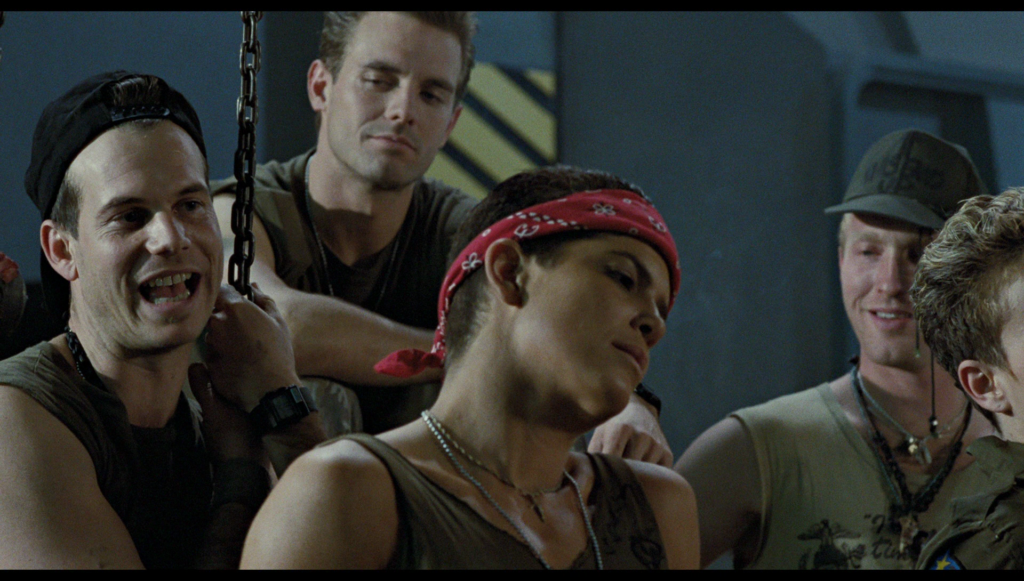 Admittedly the plot has some all too convenient events along the way but it comes together to be one hell of a thrill ride. Sigourney Weaver gives her best performance to date and really gives more depth to Ripley in general. The whole film feels big from start to finish.  It definitely feels like something’s amuck and we are not quite sure what it is.  Combined with the practical effects and scares, the film comes together to create a complex story that offers much more than your average creature-feature/alien flick. The one thing that seems to be true for all of the Alien films is that they do not seem to fall into the genre they are supposed to be in.

I cannot tell you just how great this film looks. I was not expecting much in the way of picture quality but this transfer looks absolutely amazing. The picture is crisp and the colors seem much brighter. A few days before writing this review, I stuck in my old DVD copy from the 20th Anniversary Boxset and the difference is phenomenal. I am now set on upgrading every single one of these films if they release anniversary editions (fingers crossed). 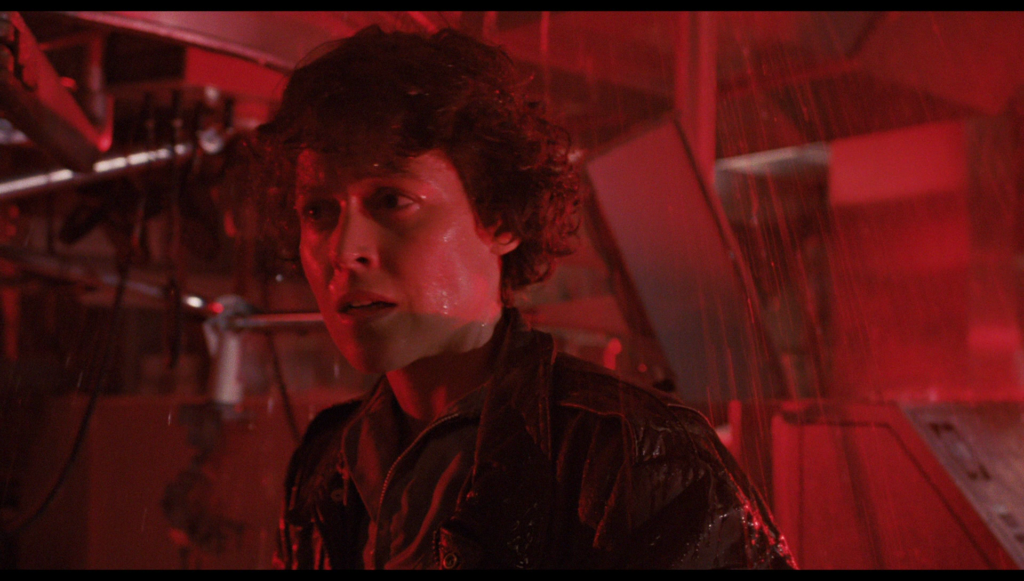 There are only a few moments where the transfer does not make up for the poor quality and it is mostly in scenes where fast panning is involved. Originally filmed using an Arriflex 35-III and paired with a dynamite visual effects team, the film would go on to win an Academy Award for Best Visual Effects. This film is nearly single-handedly responsible for my love of the use of practical effects in a film to create a dynamic experience for the viewer.

In a film like this, audio quality and score can absolutely make or break the movie. Luckily, the sound effects team responsible for Aliens was absolutely terrific, so much so, that they would also go on to win an Academy Award for Best Sound Effects. The score, however, is something else altogether. Without its structured and dynamic tone, I am convinced that this film would not seem as cohesive as it does. It is a shame that the original score James Horner created was edited down so much because it is exceptional.  As you will soon find out, there are two ways included in this release in which to enjoy the score in nearly its entirety. 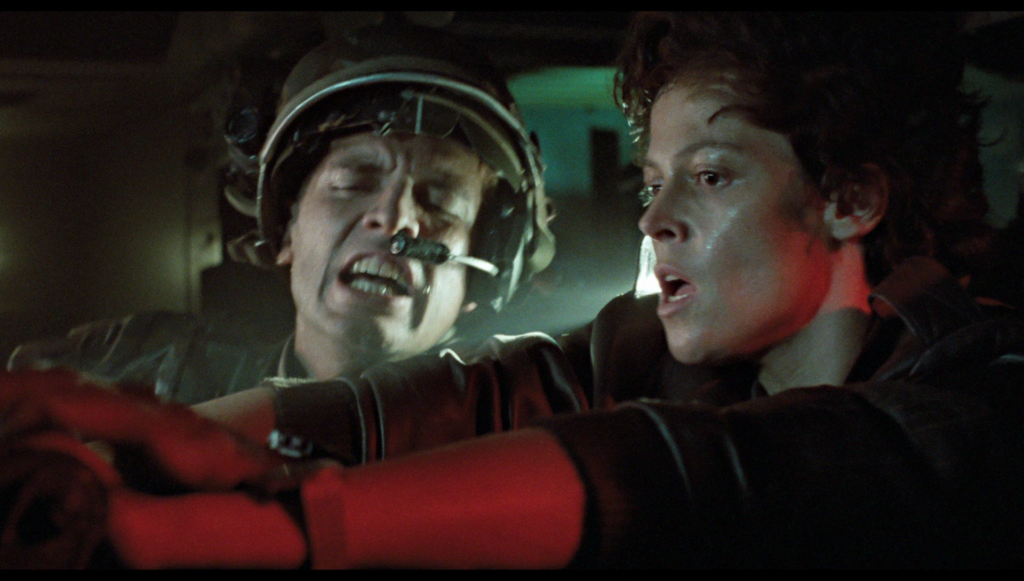 As far as the transfer, I think they did a marvelous job of fixing some of the issues I previously noticed in my DVD version. The dialogue is more clear and crisp and everything seems to just fit better within the general volume of the film.

I am in love with the packaging for this film. I honestly wish (however unrealistic it may be) that all films were packaged like this. When I shell out some money for a film I love, if it were up to me, there would two options: the standard single disc case with a slip (that we see so often) and then a deluxe version much like this. So what did they do so right with this release? The single disc case is housed inside a box, on the front of which is featured artwork that is absolutely exceptional and does well to pay tribute to such a wonderful film. On the back of the box, instead of having a detachable slip attached by a sticky dot, it is actually printed on the back and in high quality. Inside the outer shell is the single disc case with some additional dynamic artwork and a cardboard case containing art cards and illustrated comic reprint. Inside the single disc case is more of what we usually see, an eco case cut-out and a not so exciting disc with generic artwork (although these days any artwork is something to appreciate). Inside the cardboard case, we find some truly amazing art cards, my favorite of which is prominently on the front and the comic reprint that has some remarkable illustrations of the some of the greatest moments of Aliens. My one complaint is that inevitably these cardboards additions are a pain.  You never get the inserts back in the right way the first time and you are bound to bend or fray the box over the years. All in all, I have to say I am more than pleased with this release and its packaging.  Truly a great addition to any collection. 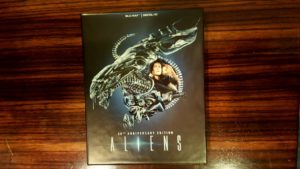 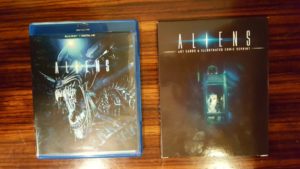 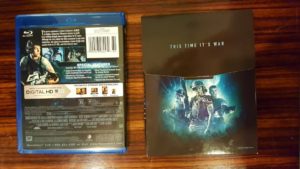 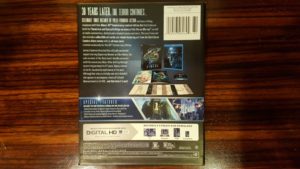 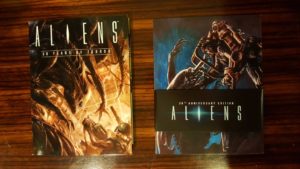 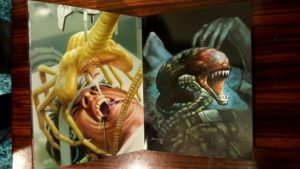 Special Features
When considering the magnitude of this film and how influential and monumental it is in the in the careers of so many I expected a lot of features. Honestly, I am not the least bit disappointed. One thing I really do not care for is the fact that some of the features seem to be only accessible via the MU-TH-UR mode which, as a concept, is actually kind of awesome; however, I wish they were accessible from the main menu as well.  This will be explained more in detail below.  As a whole, I think this release was aimed at being really interactive which when considering the time in which it was released kind of works, it takes me back to the DVD’s of the nineties in which all the menus tried to be overly interactive but we all bought into its novelty.  In that regard, I appreciate the sentiment. The special features are as follows: 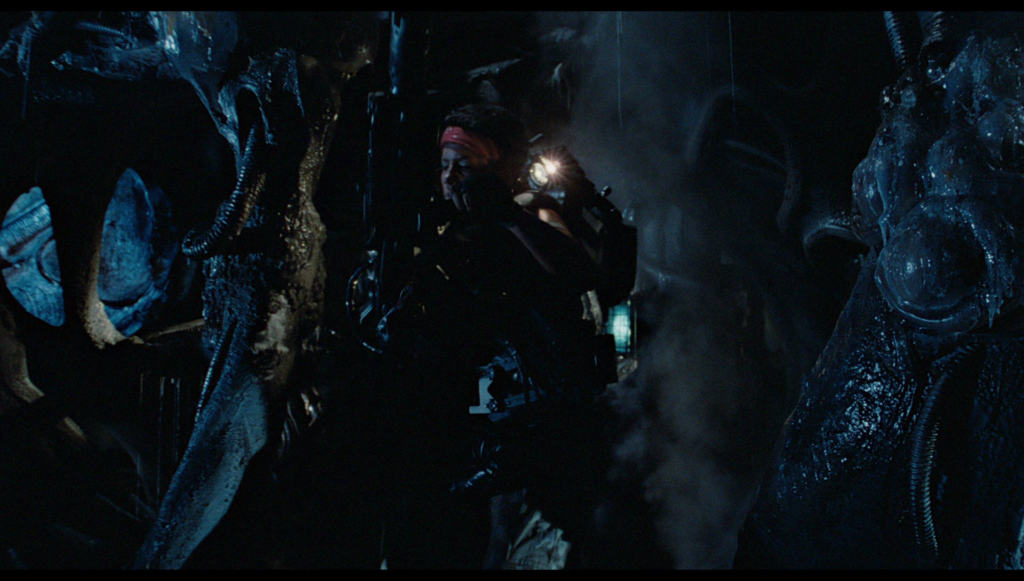 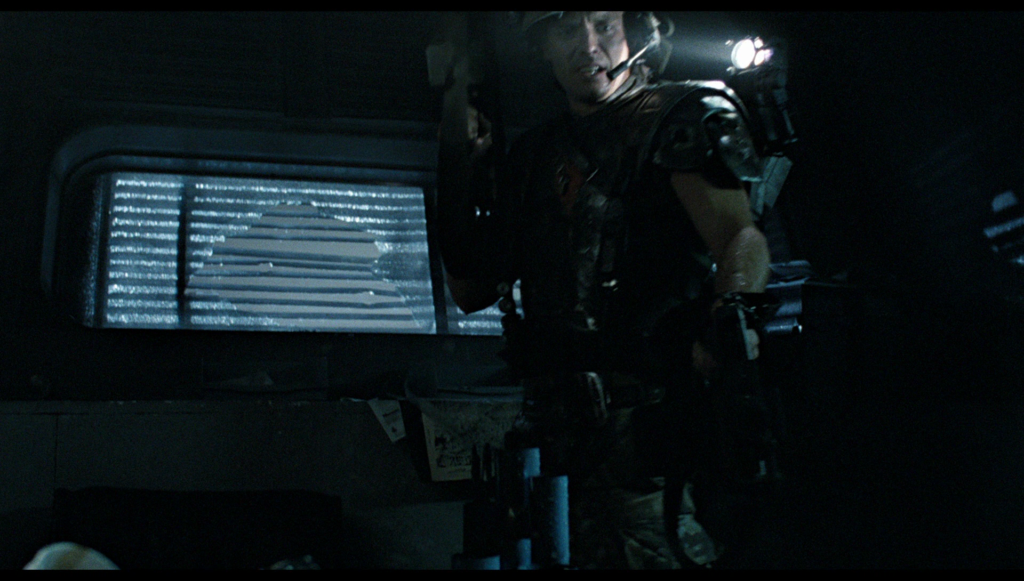 Aliens is one of those films you end up taking for granted. The one you say, “Well, yeah, that is a great movie,” but it stays on your shelf. I implore you to dust it off or if you are looking to re-purchase, this would be a great choice.  Sigourney Weaver and James Cameron are a great team and the deeper story bleeds through the genre mixed film about aliens in a distant future. There is also so much to say about this release in particular. So many things were done exceptionally well and the artwork and packaging are wonderful. The film itself is an obvious classic that has only been enhanced by its blu-ray transfer. The extras included with the release (the art cards and comic reprint) are dynamic and cool. This is a remarkable edition and Fox seemed to go all out for the 30th-anniversary edition. I hope that we get to see this quality of release in the future for the subsequent films in the series, however, I am not getting my hopes up. I highly recommend this edition, it makes a great addition to any collection and the film itself is a must own.