Air Force One is a 1997 American political action-thriller film that was written by Andrew W. Marlowe, and directed and co-produced by Wolfgang Peterson. It is about a group of terrorists who hijack Air Force One and the U.S. President’s attempt to rescue everyone by retaking the plane.

Starting off with American and Russian Special Forces as they’ve captured General Alexander Radek, the dictator of a rogue terrorist regime in Kazakhstan that possessed some stolen Soviet nuclear weapons, and threatening to start a new Cold War. Three weeks after the mission, U.S. President James Marshall attends a diplomatic dinner in Moscow, during which he praises the capture and insists that the U.S. will no longer negotiate with terrorists. Marshall and his entourage, including his wife Grace and 12-year-old daughter Alice, and several of his Cabinet and advisers, prepare to return to the U.S. on Air Force One. In addition, members of the press have been invited aboard, including Radek loyalists disguised as journalists led by Ivan Korshunov.

The film stars Harrison Ford and Gary Oldman, as well as Glenn Close, Xander Berkeley, William H. Macy, Dean Stockwell, and Paul Guilfoyle. A box office success with generally positive critical reviews, it was one of the most popular action films of the 1990s. President Bill Clinton had seen the film twice while he was in office, and gave it good reviews. He noted, however, that certain elements of the film’s version of Air Force One, such as the escape pod and the rear parachute ramp, did not reflect features of the actual Air Force One (though since many Air Force One features are highly classified and on a “need to know” basis, these features cannot be completely ruled out). In the audio commentary, Wolfgang Peterson mused that although the real plane did not have those features at the time of filming, they would probably be added by future governments.

During his campaign for the Presidency in the 2016 Presidential election, businessman and Republican candidate Donald Trump said that Air Force One was his favorite film role of Ford’s, because he “stood up for America”, although he did not mention Ford’s character’s commitment to refugees which sharply contrasted with his own policies. Instead of thanking Trump for the compliment, Ford, adhering to his own beliefs, reasoned that “it was just a film” and doubted that Trump’s Presidential bid would be successful. 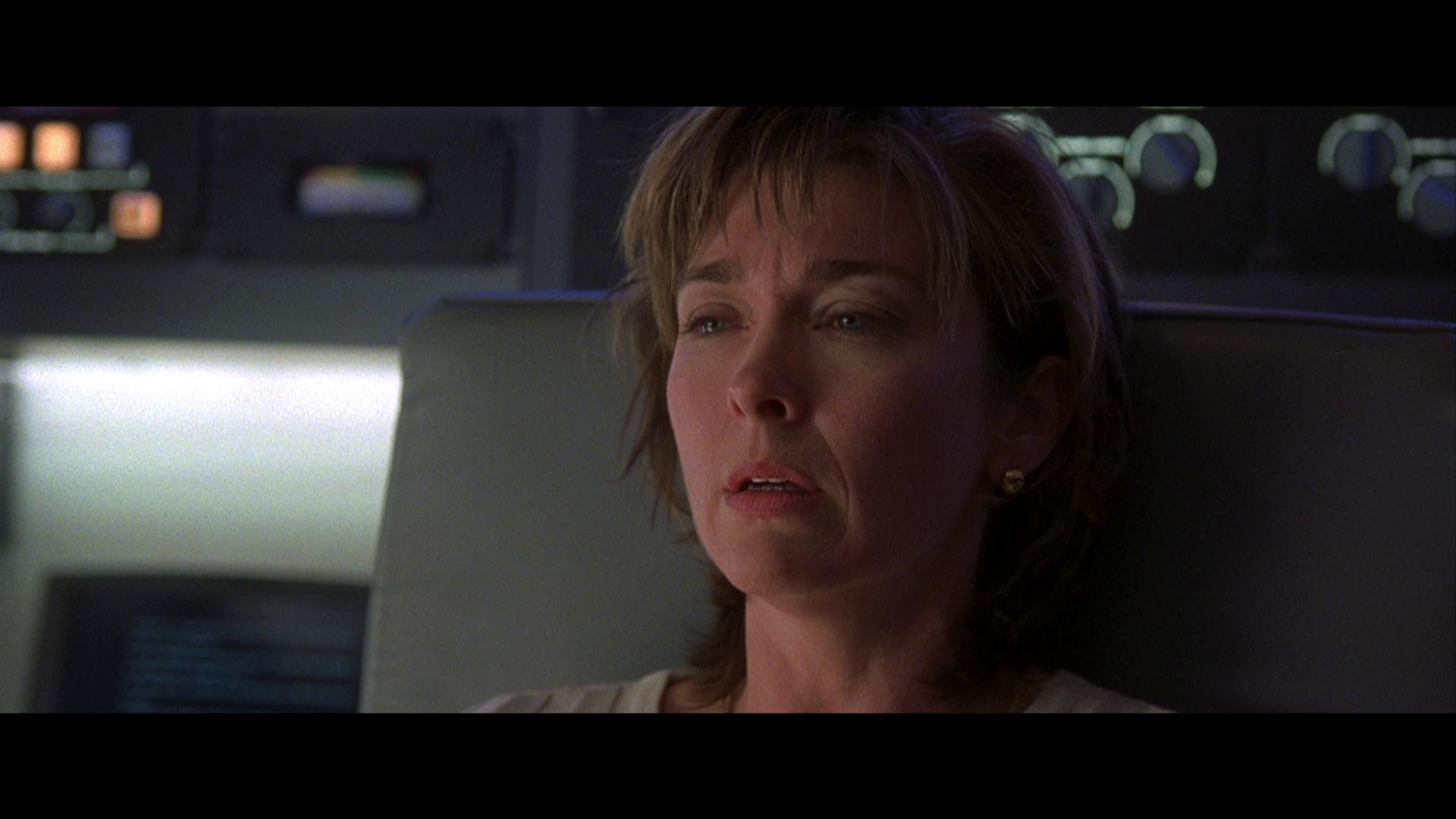 Air Force One being one of those classically vaulted Sony titles, now features an all new 2160p/HDR enhanced transfer and an all new Dolby Atmos audio track that improves the overall experience that is to be had as President James Marshall outlines a new strategy for combating evil in the world. Using the infamous airliner as the central location for the movie, Harrison Ford suavely works to negotiate with a terrorist outfit for the release of release of General Radek. As they execute their hostages one at a time until their demands are met, he is met with his match as the President has both the necessary skill and determination to do whatever it takes to save his family and friends. 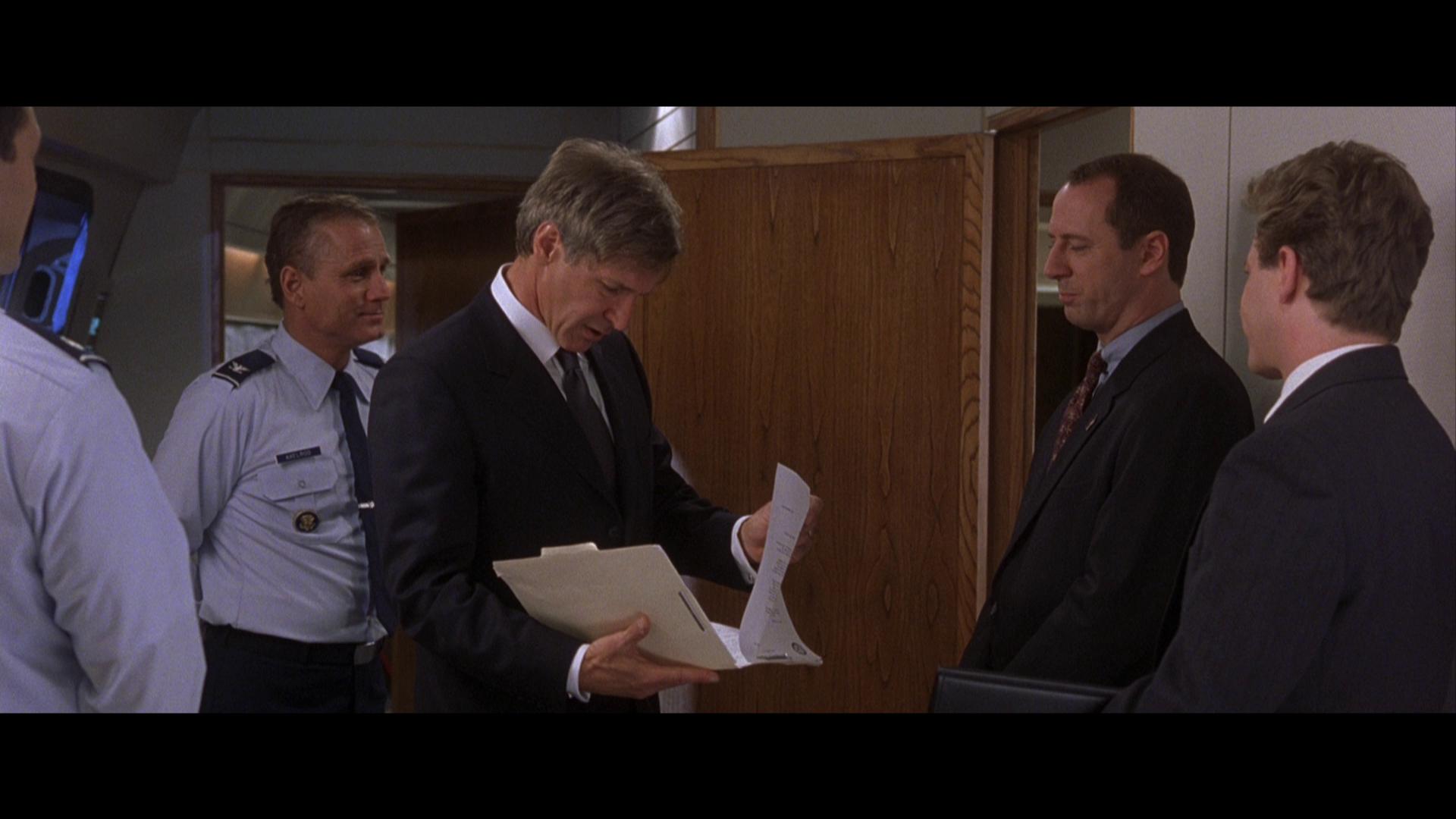 Originally released during the summer of 1996, a time when film still ruled the cinematic landscape, Air Force One provides its viewers with an absolutely terrific presentation that’s a considerable improvement over its previously released Blu-ray counterparts. Giving its viewers some considerably richer black tones, and some absolutely wonderful HDR colorization boosts, this release is one that really marks itself to be another feature piece for your home setup from the Sony catalog. The overall grain is nicely distributed, and while in some places it can be critical, it aids the overall filmic presentation with its increase in clarity, firmness, and accuracy from the previous releases. While there isn’t anything that I would say is wrong with the 2009 Blu-ray release, this new 4K UHD release certainly offers a significant upgrade over that particular disc and ultimately makes this one of my most favorite releases to the format as of recent times as studios continue to reach down into their archives to re-release these movies. 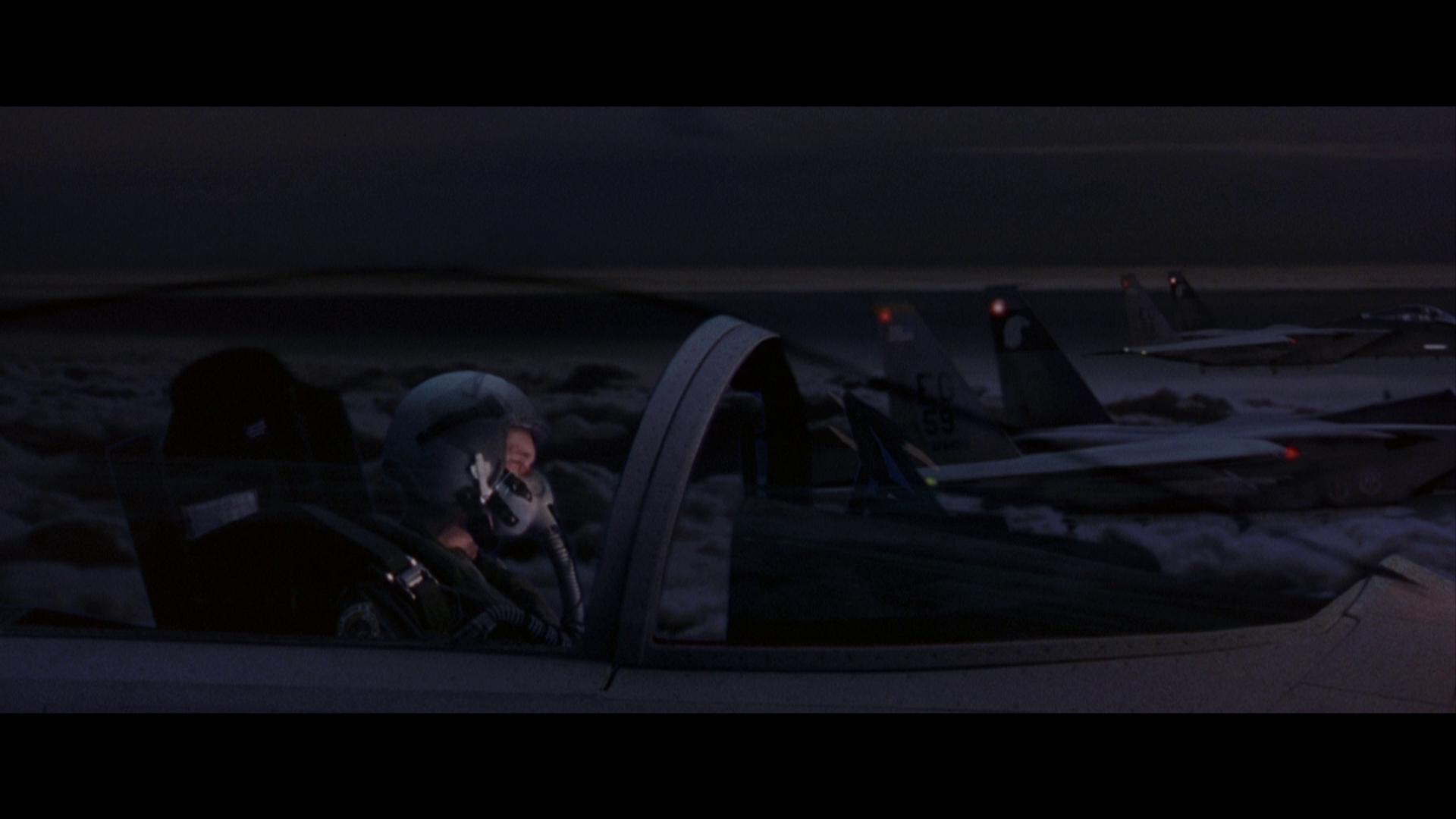 Packaged with an all new Dolby Atmos audio track, the 4K UHD release of Air Force One that packs an absolutely all out immersive audio experience for its viewers. With its surrounding elemenets being the most notable part of the track, this audio track features a floor ripping bass track that really does a great job at presenting the severity of the tension that’s at play with the plotline. The musical score that accompanies the film really sounds phenomenal as it roars through your home theater system, continuing to aid in the overall story presentation and quite possibly offering a new element to the experience that might have gone missed with the previous releases. There wasn’t too much in terms of the elevation aspect as they didn’t really present themselves in a manner that we’ve seen with other Atmos audio tracks; but, I can’t really complain because they are certainly there and notable enough to be heard when you’re listening for them. The dialogue is spoken cleanly, ensuring that everybody could be heard and understood without any need to manually adjust the volume levels as it progressed onward. 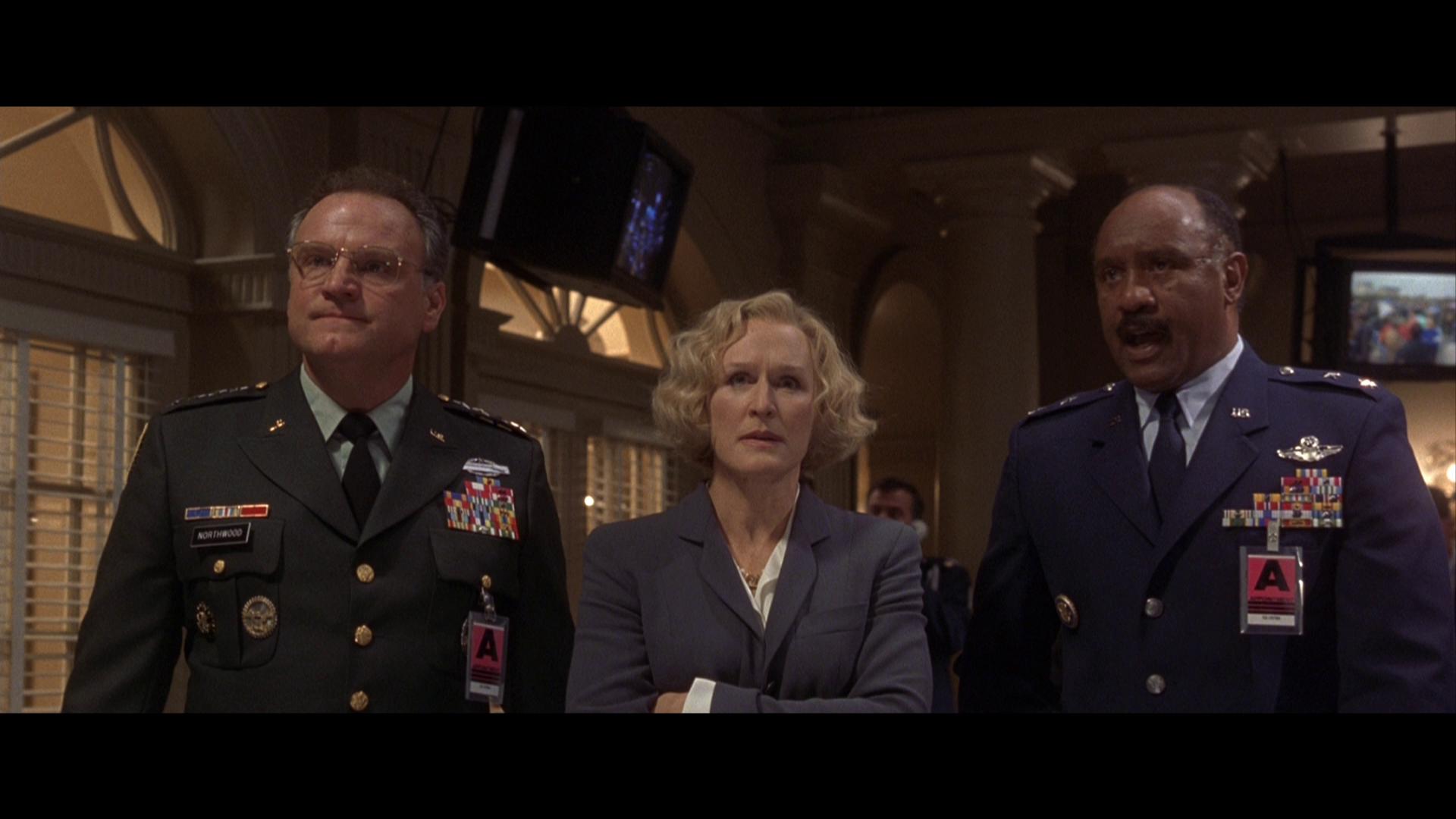 The 4K UHD release of Air Force One comes packaged in your standard two-disc 4K UHD amaray case.  Within the case is the standard 4K copy of the movie, as well as the standard Blu-ray copy.  Neither of the discs feature any artwork outside of the standard release text and solid colored background.  There is a digital copy redemption pamphlet included, as well as a slipcover that was made available during the original pressing of the release.  Unfortunately, my personal copy does not have a slipcover and is from a later pressing. 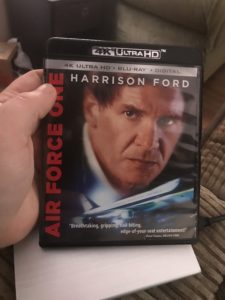 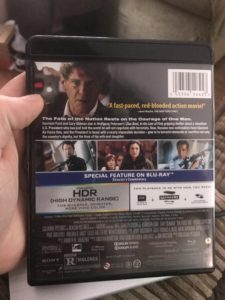 The 4K release of Air Force One is extremely bare when it comes to special features, as it really only contains an optional director’s feature audio commentary. With the optional commentary also being included on the 4K disc, and the original theatrical trailer, they really could have included a lot more of content to celebrate not only the re-releasing of this movie; but, to celebrate the peak in visual and audio presentation that came with this release as this is really how this movie should be displayed. 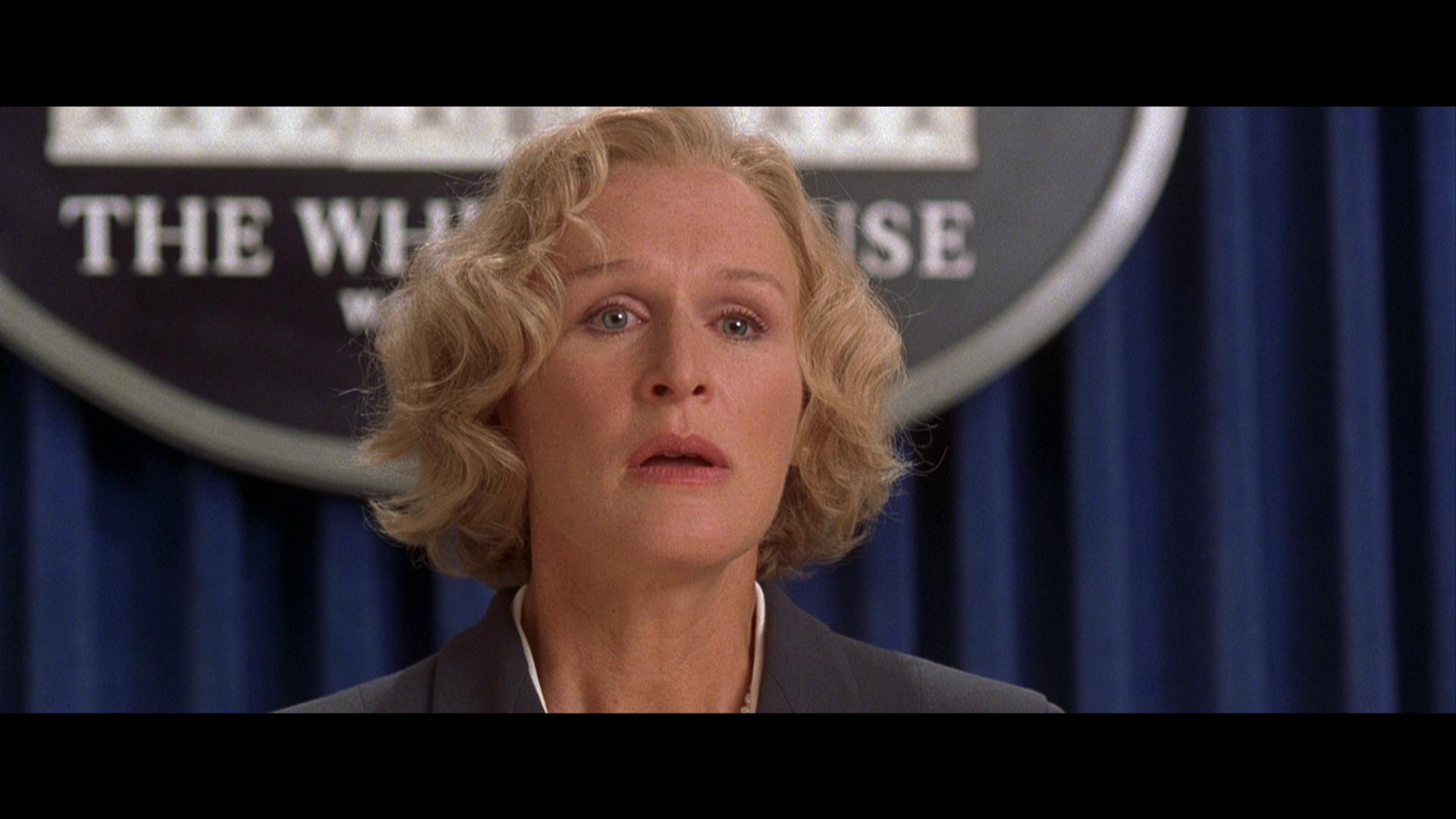 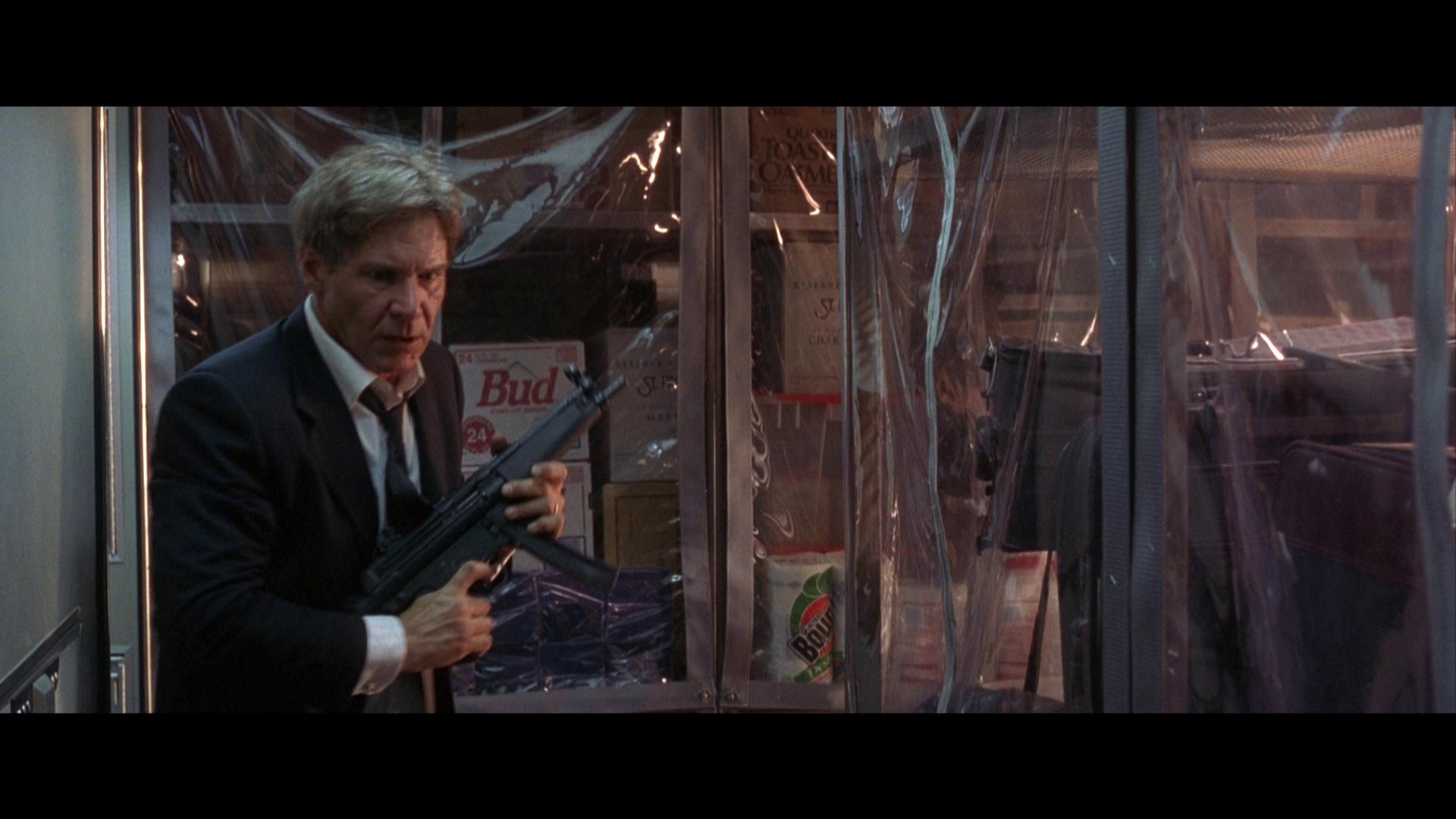 Despite its lack of special features, the 4K UHD release of Air Force One really benefits from its utilization of HDR as it gives its viewers one of the more beautiful makeovers that we’ve seen with catalog titles. While the 2009 Blu-ray release wasn’t bad at all, the 4K offers an extremely noteworthy presentation that really turns the experience up several notches. The visual presentation, really benefits from the fuller, firmer, and more stable HDR encoding, and the audio experience really packs an all new punch, which shouldn’t really be a surprise with the expectations that have been set with the Dolby Atmos technology, and the outstanding audio presentation that this movie has always had. If you’re considering this release for your collection, I would absolutely recommend picking it up. Air Force One is available on 4K UHD today. 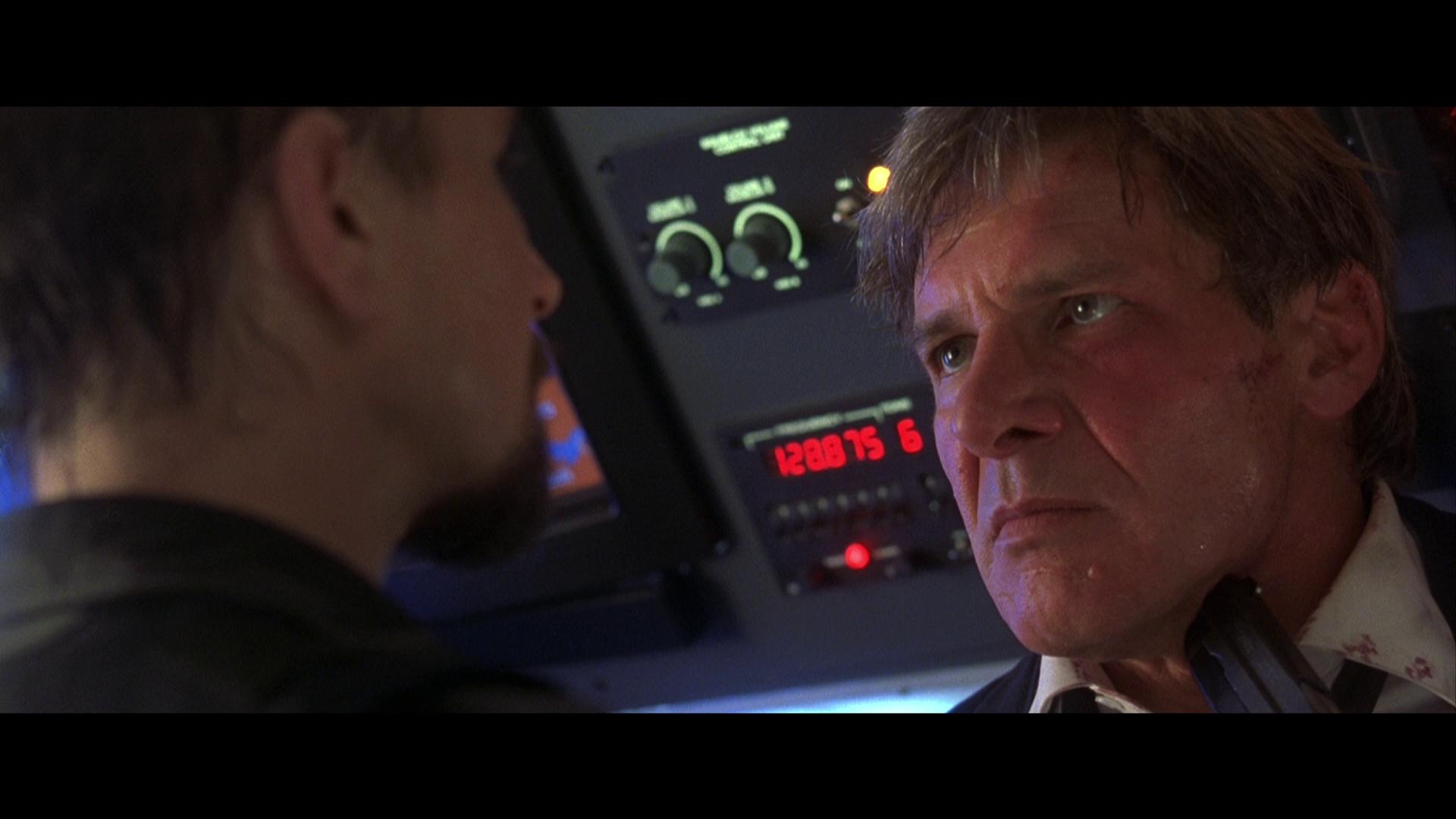