Comedy is tough. Reviewing movies is tough, as you put your thoughts out there to the world to respond to, but comedy for a movie reviewer might be the hardest, most subjective genre of movies to write about. There’s such a large spectrum of what people find funny that I sometimes struggle to figure out what to say about comedy movies. It’s even harder to quantify why I find something funny, or don’t. Which is why taking a look at Absolutely Fabulous: The Movie, released this year by Fox Searchlight Pictures, was a particularly tricky road for me to walk down. Not only is it a comedy movie, but it’s a comedy movie that is based on a decades old television franchise that’s been well established in the UK for years. Oh boy. 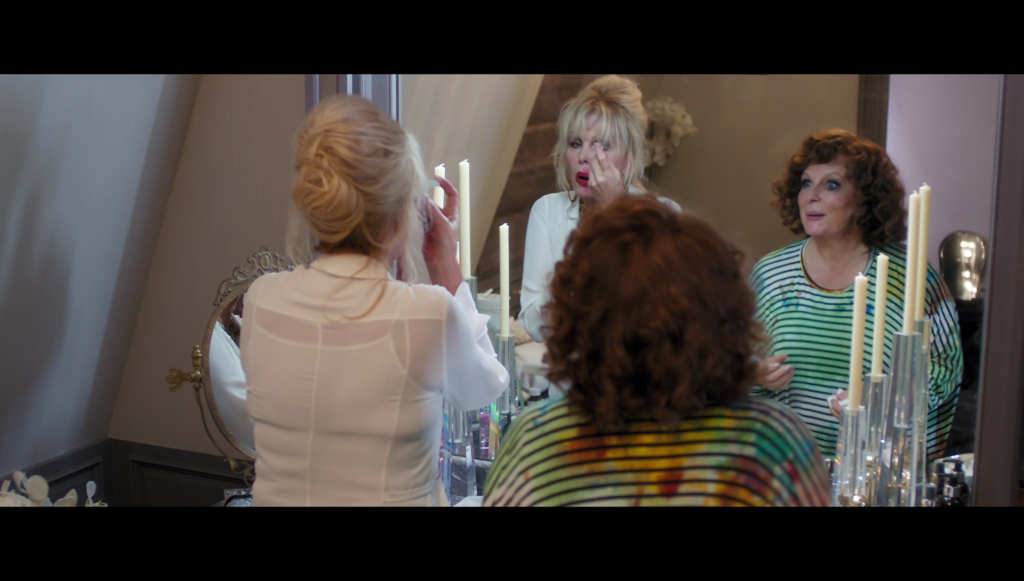 Absolutely Fabulous: The Movie continues the story of Edina and Patsy, two women in their 60s who work in the fashion industry; Edina runs a PR firm, and Patsy sets up elaborate fashion events for members of the fashion elite. The film drops us into their lives as Edina realizes she’s run out of money, and has no significant PR prospects to maintain her firm with. Patsy, knee deep in setting up a massive fashion event for a well regarded designer, manages to get one of the UK’s most famous models, Kate Moss, to attend in the hopes that Edina will be able to woo her and court her business. After an unfortunate accident in which Moss falls into the river running nearby the location of the event and disappears, Edina and Patsy are forced to head on the run to find Moss’s body, and prove their innocence in a murder trial brought against them in the aftermath. Their journey takes them to a number of exotic and ridiculous locations, placing them into a number of goofy situations that put them up against odds the likes of which these two ladies have never seen previously. 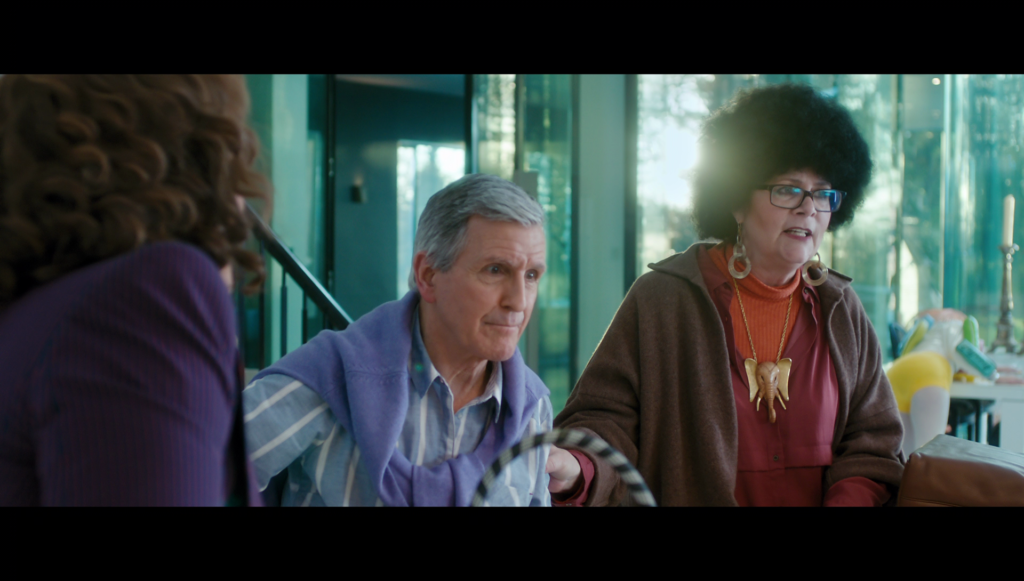 Because I’ve never seen Absolutely Fabulous in my short time on this Earth, I was forced to go into this film blind, which may seem like a bit of a blunder to long time fans of the franchise. It’s true, I probably missed a world of references to older episodes and specials from the series’ past, but one of the things this movie does incredibly well is establish the lead characters of Edina and Patsy. The film’s first act did a wonderful job of establishing things like that Edina has a strained relationship with her daughter, that Patsy is extravagant and over the top in everything she does, and who their rivals and general associates are fairly clearly. It does a very efficient and effective job at boiling twenty years of character development and storytelling into a very neat package, and uses that base to launch us into their current lives. 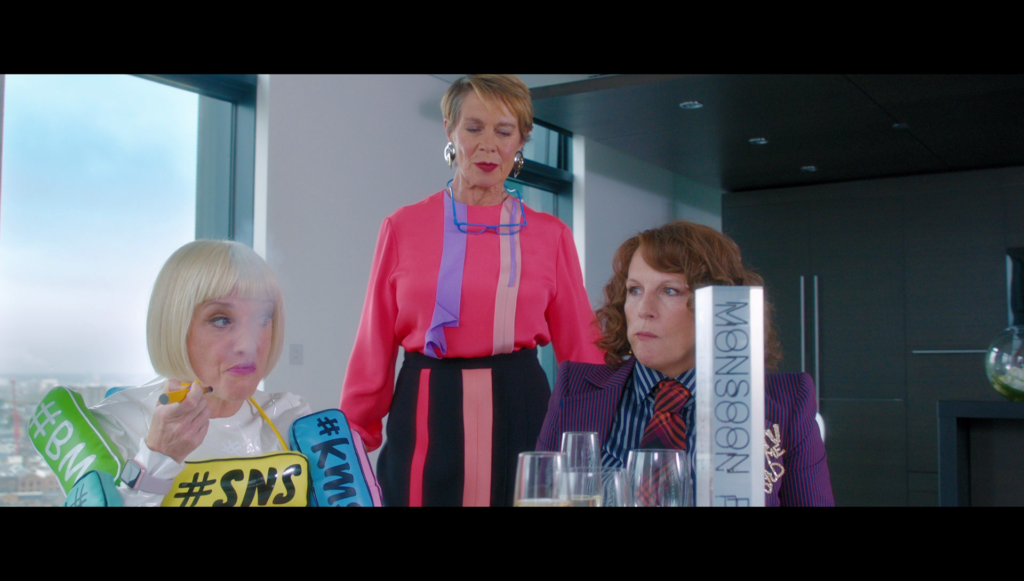 Unfortunately, the film takes a goofy, but digestible first act and launches into straight madness as soon as the fashion event Patsy is planning kicks off. It becomes a series of weird non-sequiturs that just snowball into a weird mess of comedic elements that don’t really make for much of a compelling story. Side characters get recklessly thrown about in order to propel our two leads forward in their quest, even if it doesn’t totally make a whole lot of sense. It feels like screenwriter and star Jennifer Saunders did everything she could to make Absolutely Fabulous: The Movie feel zany and over the top that she forgot to make an interesting movie, which is its ultimate undoing. You can stuff your movie full of celebrity cameos and wacky plot sequences, but they either have to be incredibly funny one-offs, or have some sort of meaning. By the time I reached the film’s end, I felt there wasn’t enough of either to grant the film any sort of merit. 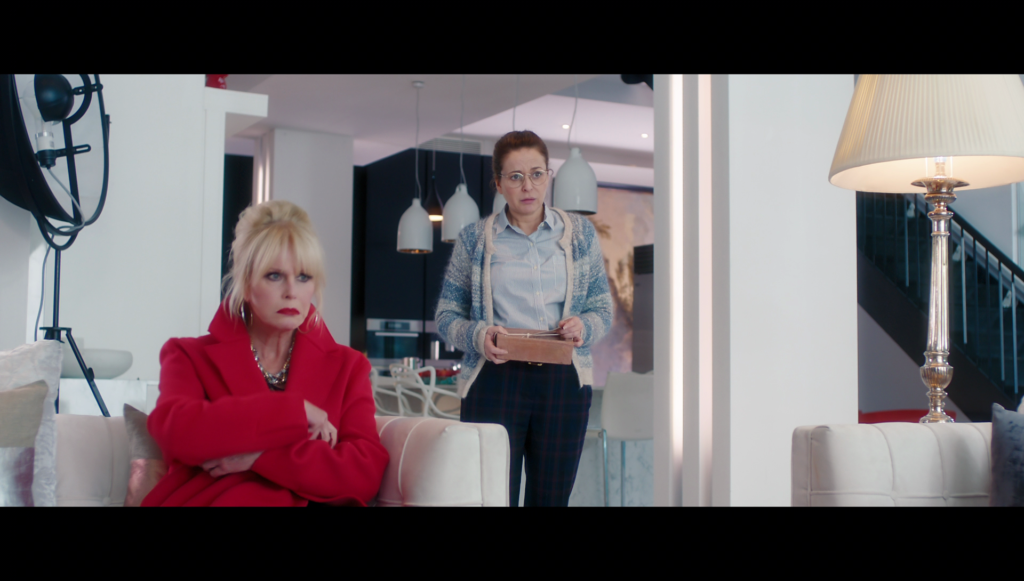 So, I guess Absolutely Fabulous: The Movie didn’t click with me. There were bits and pieces that made me laugh, but underneath all the glamour, glitter, and insanity, there isn’t much to keep you around. I have no doubt that there are probably tons of references and characters that I didn’t pick up on due to my lack of context, but when the credits rolled, I was pretty indifferent to the whole affair. I was hoping that this movie would make a compelling case to watch the television show; instead, I kind of hope that I never have to deal with Edina and Patsy again as long as I live.

Absolutely Fabulous: The Movie was shot digitally, and finished using a digital intermediate of unknown resolution for a theatrical aspect ratio of 2.35:1. The film is presented here in 1080p resolution, maintaining that 2.35:1 aspect ratio.

Bright, colorful, and sharp are the three words I would describe Absolutely Fabulous: The Movie’s video transfer. Given the breathing room of a full feature budget, Absolutely Fabulous has expanded in scope and scale to match the requirements of going to the big screen, including a generally wasted scope aspect ratio. The film is full of sharp, clear, detailed mid and close-up shots, and color is wonderfully saturated, giving the cold blues of the club and fashion event a distinct darkness, while the outdoor journey the two make through France looks beautifully gold and green. Having been acquired digitally, there is some light video noise that pushes into the image and the occasional soft shot, but overall Absolutely Fabulous: The Movie looks fantastic.

Absolutely Fabulous: The Movie is presented on Blu-ray with a DTS-Master Audio 5.1 surround sound track, mimicking what was heard in theaters during its original release. 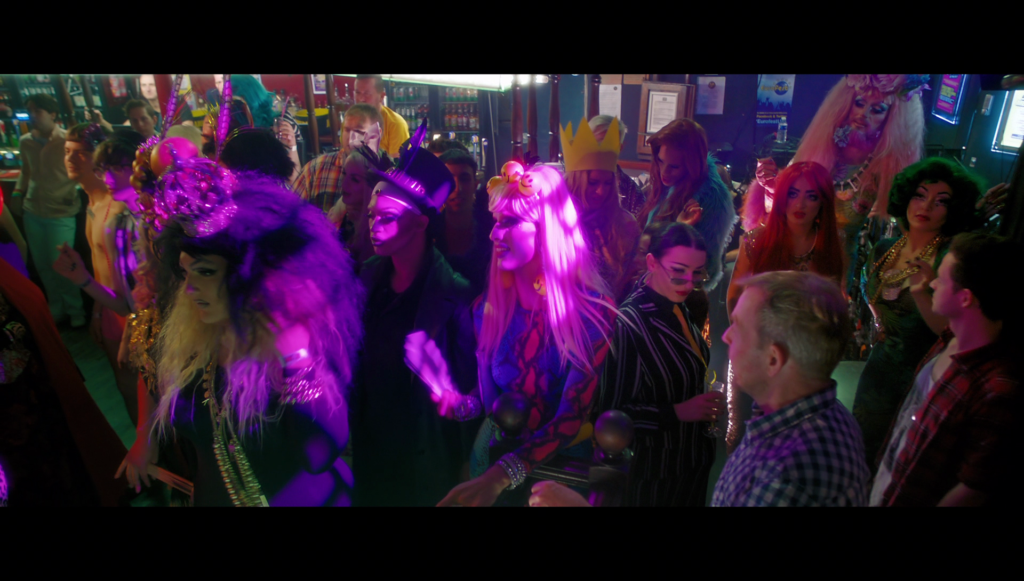 Absolutely Fabulous: The Movie is pretty much driven by center channel locked dialogue and sound effects, but on occasion it opens up, especially when the girls hit up the major fashion event, or a party later in the film. During those sequences, the surrounds light up, and the mix becomes rather busy. The sub woofer never sees much love, but it isn’t all that surprising. This mix won’t blow you away, but it’s definitely serviceable for the film’s lofty ambitions.

Absolutely Fabulous: The Movie is presented on home video by 20th Century Fox Home Entertainment in a standard Blu-ray case with a holographic slipcover of sorts. The slipcover and Blu-ray case feature identical artwork. The front artwork features Edina and Patsy popping a bottle of champagne against a bright sequin background which highlights the film’s title. The back artwork features a collage of the film’s various cameos, below a picture of the two leads putting their glasses together in celebration. It also features a review quote, a paragraph about the film, a list of features, technical info, and credits. Bright, and colorful to match the movie, but a bit of an eyesore if you ask me.

Deleted Scenes – 3 minutes of raw, unfinished scenes cut from the film that mostly feature little character development moments that would have served to slow the film down. Presented in an unmatted presentation.

Outtakes – 8 minutes of goofs and flubbed lines from the shoot of the movie. Also presented in an unmatted presentation. 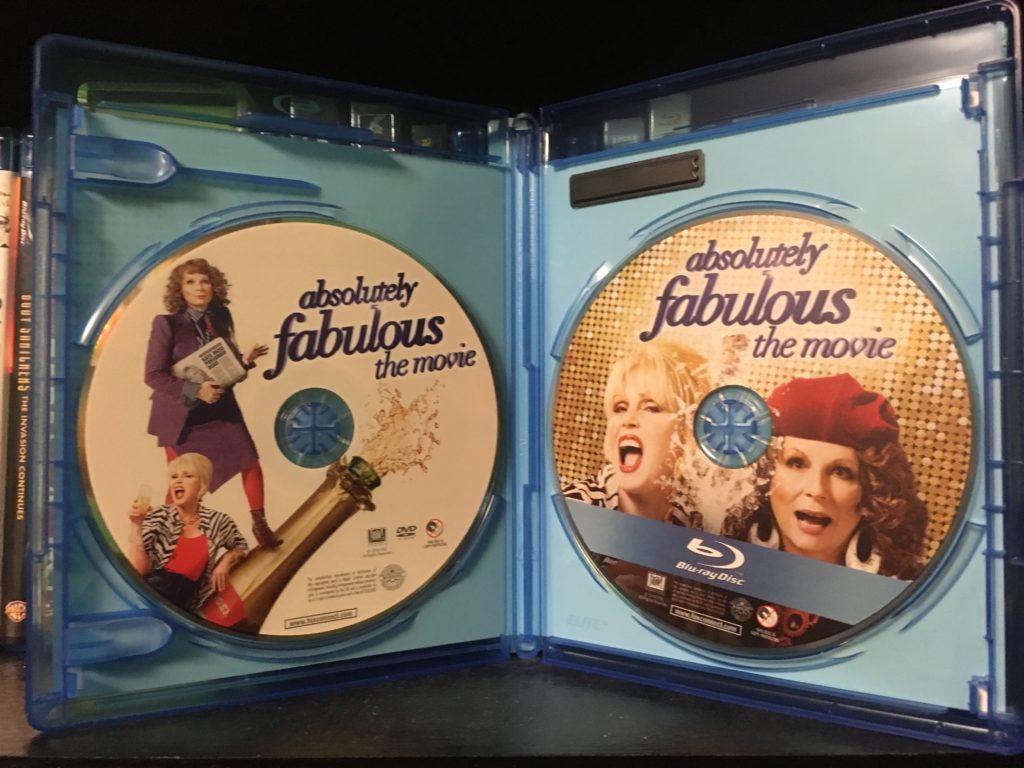 On Set with Dame Edna – 14 minutes of behind the scene footage from the making of the film, led by Dame Edna, a satirical character created by Barry Humphries

Promotional Featurettes – a series of 9 featurettes, ranging from 2 minutes to 14 minutes, that breakdown various aspects of the film’s legacy and production.

Gallery – a collection still images from the film’s production 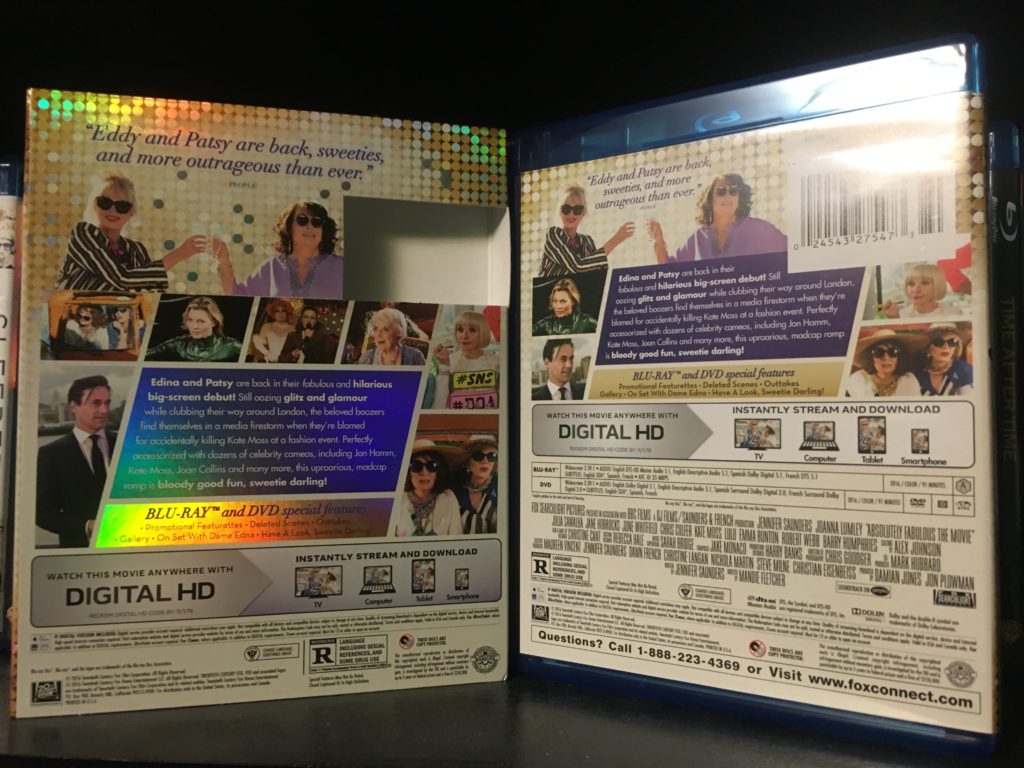 Overall, Absolutely Fabulous: The Movie has average, if not overly bright packaging, and a decent selection of extras that is sure to please fans of the film. 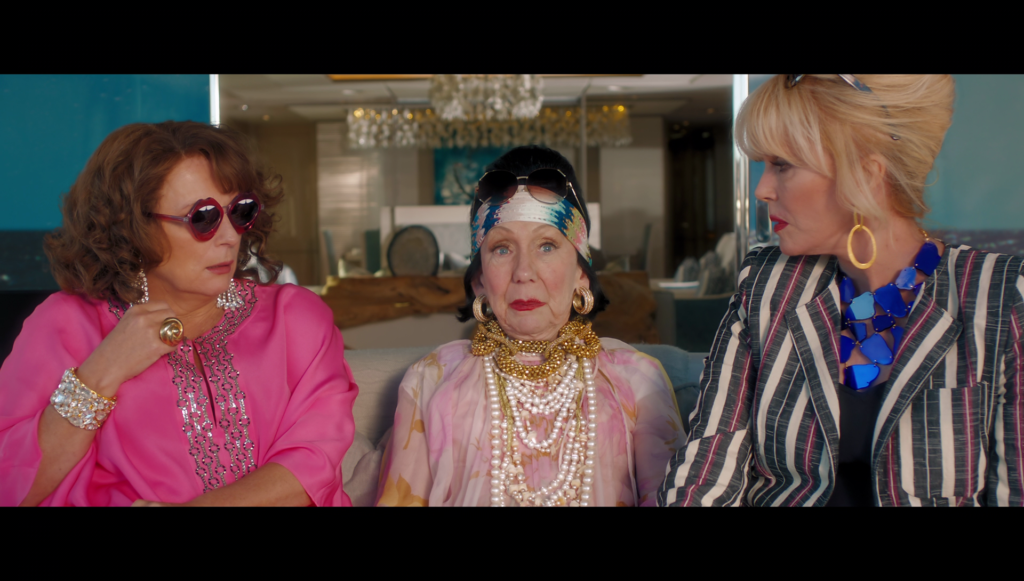 Absolutely Fabulous: The Movie just didn’t click with me. It started off strong, and then tapered off as it got more crazy and over the top, the exact opposite of what most modern comedies do. Maybe there’s some ongoing references I missed, or some fashion jokes that blew over my head, but I’m not sure if those would be enough to make me get back on the bus with Edina and Patsy. Fans of the franchise may find a lot to love in revisiting their favorite characters, but I think newcomers will find it difficult to fall in love with this incarnation of Absolutely Fabulous. On the fabulous side, Fox has released it to video with an excellent visual presentation, adequate audio, appropriately bright packaging, and a decent selection of extras. Exercise caution with this one.