The rules of the 70mm Classics Series are simple: If it’s at least partially shot using 65mm film materials, then it’s fair game. This is different than movies that were blown up from 35mm sources or otherwise, and shown in 70mm theatrically. 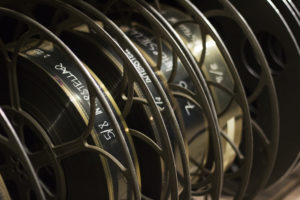 Tron is one of those movies that brought forth so many new ideas, and did so many things in a different way from anything that came before that its tough to quantify its impact on film. Its novel combination of hand-drawn animation techniques, optical techniques, and computer generated imagery to create a visual representation, accuracy aside, of how the computer world works is something that’s permeated pop culture on a scale that is nearly unprecedented. You can see popular elements of Tron in computer games, music videos, TV shows, and even other movies.

And yet, even though today its achievements are well known, the film kind of flew under the radar at the time of its release in 1982, making little more than a small splash in a big pond, which is kind of surprising, considering everything it brought to the table. I mean, it was a big special effects science fiction blockbuster, released by a huge company in the post-Star Wars era, starring a relatively well known star in Jeff Bridges. Tron was enthusiastically reviewed by critics too, with endorsements from big names such as Roger Ebert, who gave it a perfect score using his four star review scale. I guess the idea of computers being portrayed in such a grandiose way just didn’t resonate well with the theater audiences of the early 1980s. Tron was labeled as a financial disappointment by Disney, and swept under the rug for nearly thirty years. 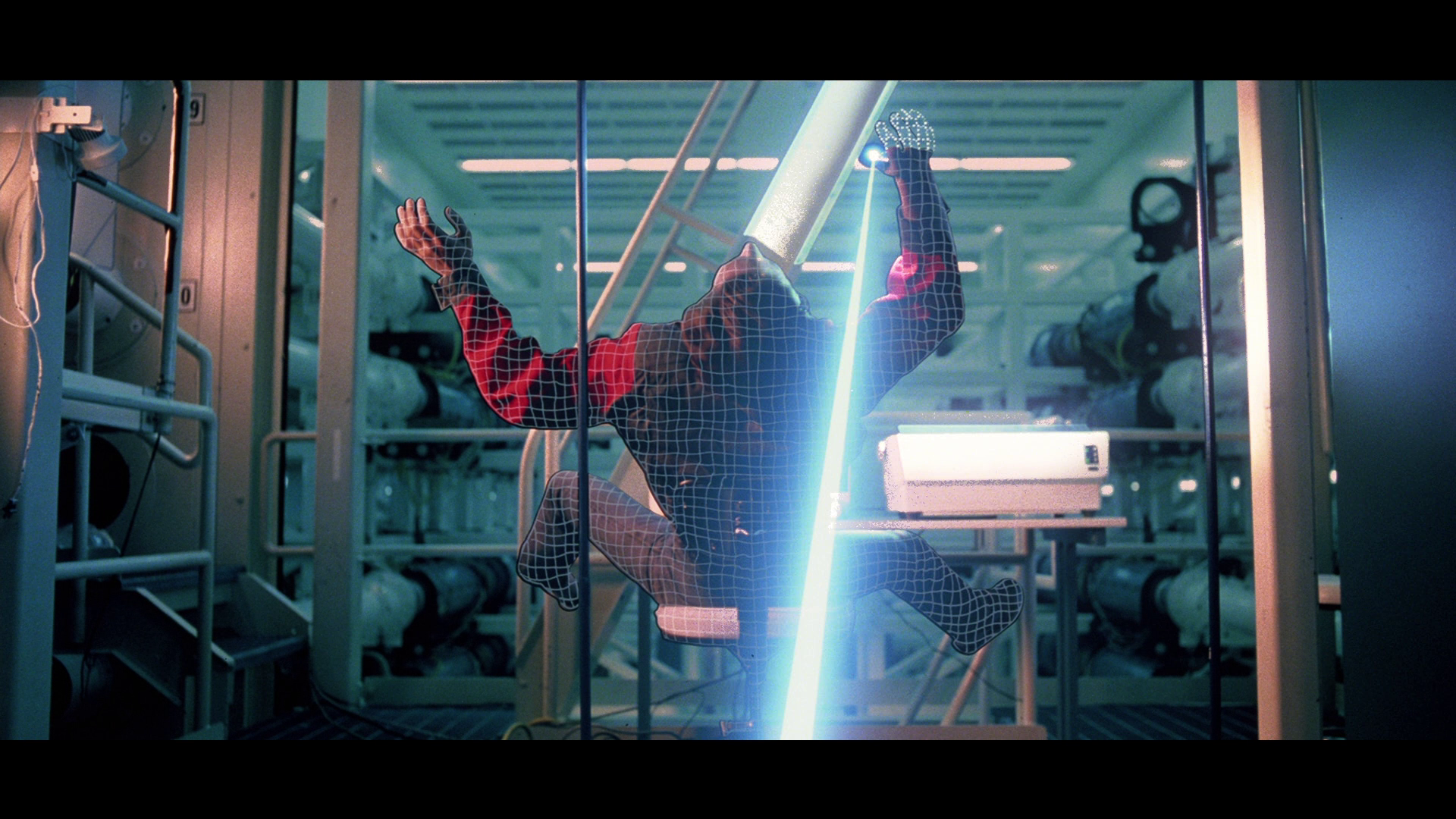 That being said, Tron is an excellent movie, even now in 2016. It follows the exploits of genius programmer Kevin Flynn, a man whose greatest and most profitable achievements have been stolen from him by a less talented coworker. He spends his free time trying to hack into the system of his former company, designing different programs to break into their computer systems to find evidence to return his property to him. He enlists the help of his friends, who are still programmers who work for that company, to help him break into the computer network from the inside. In an attempt to defend itself, the computer’s defense system uses a conveniently placed laser device to suck Flynn into the computer network. There, he embarks on an epic quest to defeat the computer program that’s trapped him, enlisting the help of the computer programs that have been trapped inside the network, as well as those designed by his friends on the outside, including the titular Tron. From there, they face lethal computer games, and an army of villainous defense programs that try and stop them from achieving their goal. The story isn’t exactly the most groundbreaking, but its strength lies in its execution, which Tron does in a nearly flawless manner. 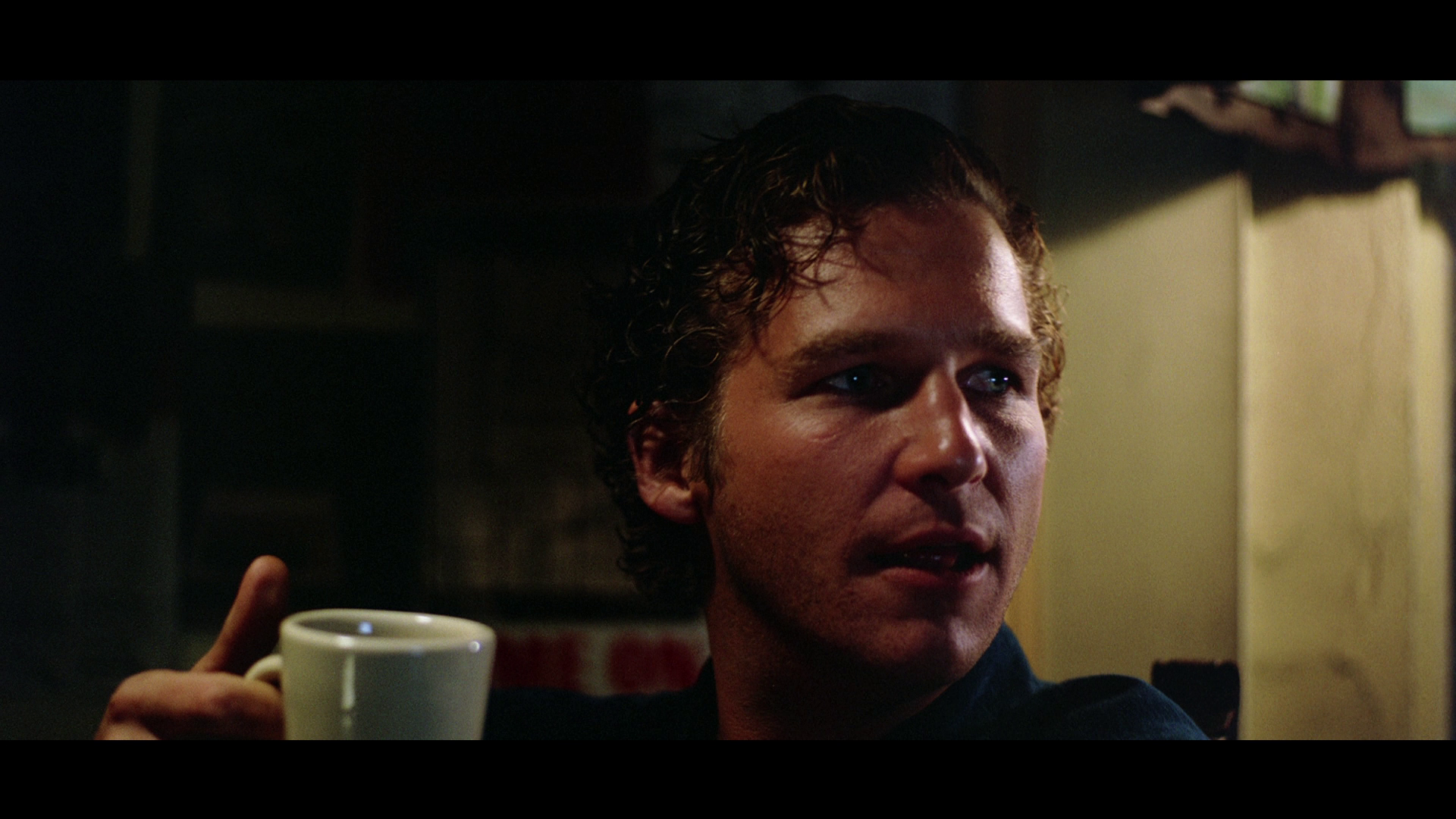 Tron is an absolute blast from start to finish. Jeff Bridges truly embraces the role of computer programmer turned computer program, bringing an incredibly enthusiastic performance to the role of Kevin Flynn, one that could have easily turned cheesy, or boring in the wrong hands. His supporting cast follows suit, with all star performances from David Warner as the Master Control Program’s right hand man Saark, and Bruce Boxleitner as the hero of the computer world, the title character Tron. You can tell that this cast really enjoyed making this movie, as the passion is present in spades on screen. Their performances are accompanied by an appropriately 80s techno sounding synthesized soundtrack, and while its incredibly fitting, it never really leaves much of a lasting impact. 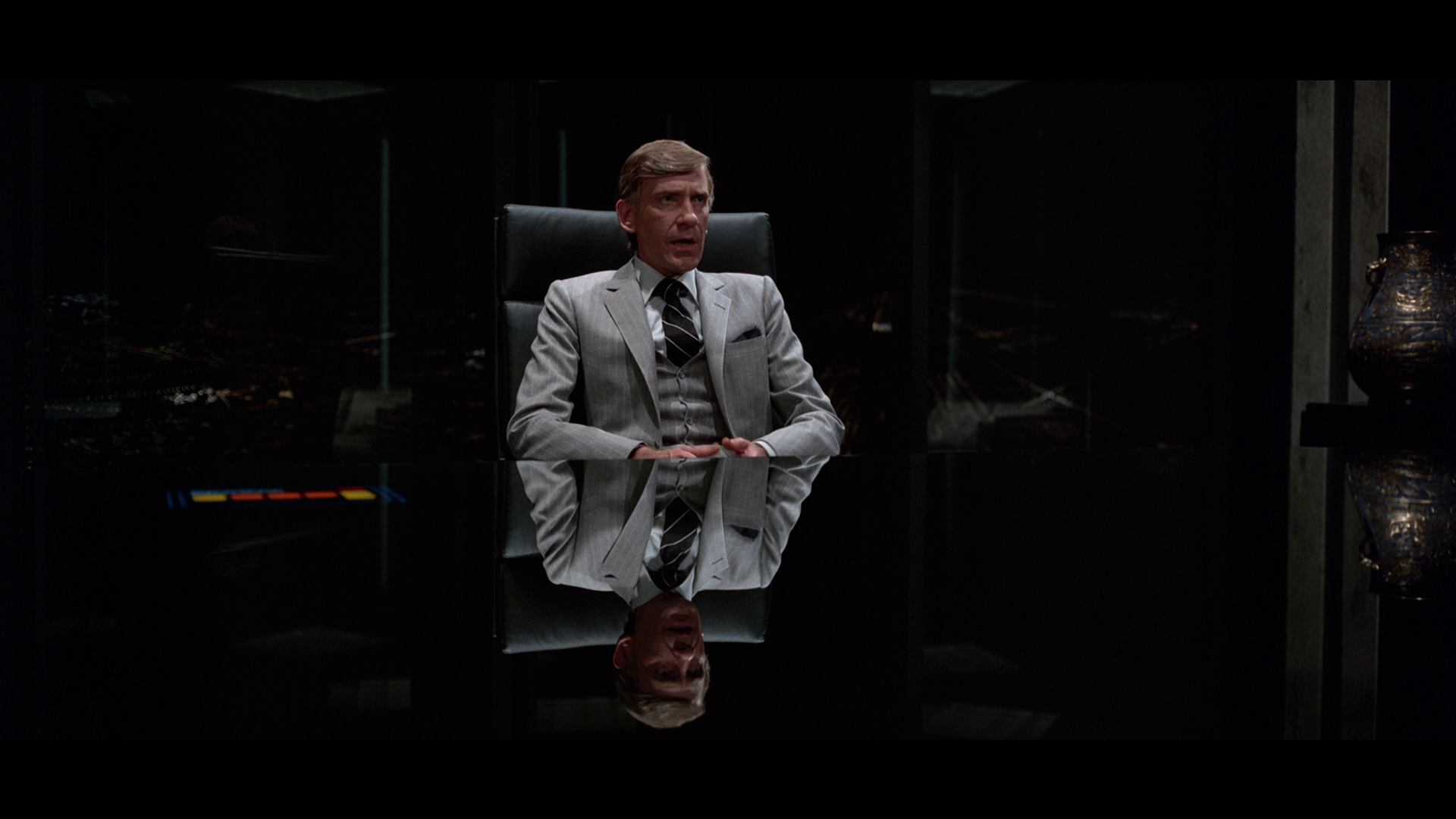 Tron is a visual tour de force, that uses a combination of traditional methods and primitive computer effects to create a world that was unlike anything that came before it, and a world who spectacle and impressiveness has never really been replicated, even by its own sequel, Tron Legacy. Tron is a product of true cinematic vision, and manages to innovate while being incredibly entertaining at the same time, not an easy feat.

Parts of Tron will never look as detailed, or as sharp as a modern Hollywood production. Tron was shot on 65mm film negative, in full color for majority of the scenes that take place in the real world, and 65mm in black and white for the scenes shot with actors that take place in the computer world. Those scenes that take place in the computer were then printed down to Vistavision, a horizontal 35mm film format, where each scene was hand tinted, and combined with effects sequences that were generated by the computers to create the unique visuals of the film. Once these scenes were finished, they were blown back up to 65mm film negative, and combined with the 65mm color negative sequences to create 70mm and 35mm prints for theatrical distribution. Did you catch all of that?

Because of all of the different processing that was used to create the computer world scenes, not only is the grain fairly heavy, but scenes often tend to turn out slightly soft, on top of the weird flickering that occurs on the tinted actors, due to the techniques used to create that effect. Detail in these scenes, is present in moderate amounts under the heavy grain, but is never particularly stunning.

The scenes that are shot using full color negative 65mm however, are absolutely incredible. Detail is outstanding, and each scene, even the busier scenes shot in Flynn’s arcade are incredibly sharp. Grain is light, and largely unobtrusive. These scenes represent some of the finest images I’ve ever seen in 1080p resolution. They’re absolutely incredible, a powerful representation of what Super Panavision 70 is capable of. Combined with the unique challenges faced by computer world sequences, it makes for a near perfect visual experience, all things considered.

Tron was released to cinemas with a 70mm six track Dolby Stereo soundtrack, which has been remixed and presented here via a 5.1 DTS-Master Audio soundtrack. 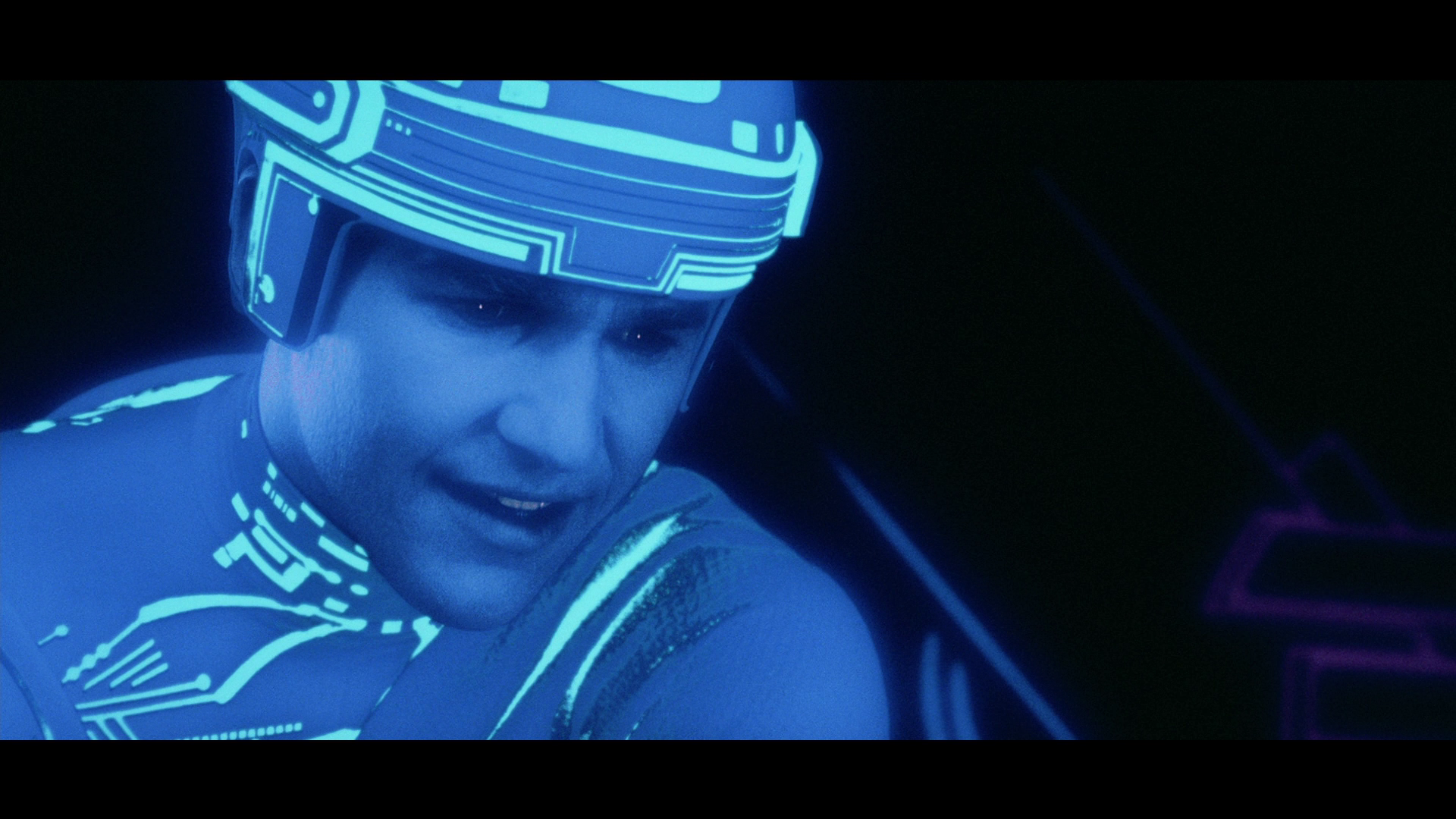 Tron’s soundtrack is just as much of an experience as its visual counterpart. Sound is constantly coming out of every speaker. Voices are panned all around the sound stage, moving from left to right, and even spending some time in the surrounds. Things are constantly crashing into walls, and being blown up as the action unfolds, and the sub woofer responds with an impressive amount of force. Voices are never lost under the intense sound design of the world of Tron. Overall, I was blown away by just how good Tron sounds. Crank this one way up guys, you won’t regret it.

Tron is packaged under the title of Tron: The Original Classic: Special Edition, a title which is prominently displayed on the holographic slipcover, as well as the standard Blu-Ray keepcase. The artwork features a minimalistic picture of Tron preparing to toss his energy disc against a grid background. Not exactly awe-inspiring, but not too bad either. The back artwork of the slipcover is far more enticing, featuring some scenes from the film and some info about the release, but also some sweet holograhpic art featuring the film’s signature light cycles. Overall, the packaging’s is decent.

As for special features, Tron’s Blu-Ray release only features two brand new features, with the rest being recycled from sources that go as far back as the Disney Exclusive Archive Laserdisc release in the mid-90s and the various DVD releases. 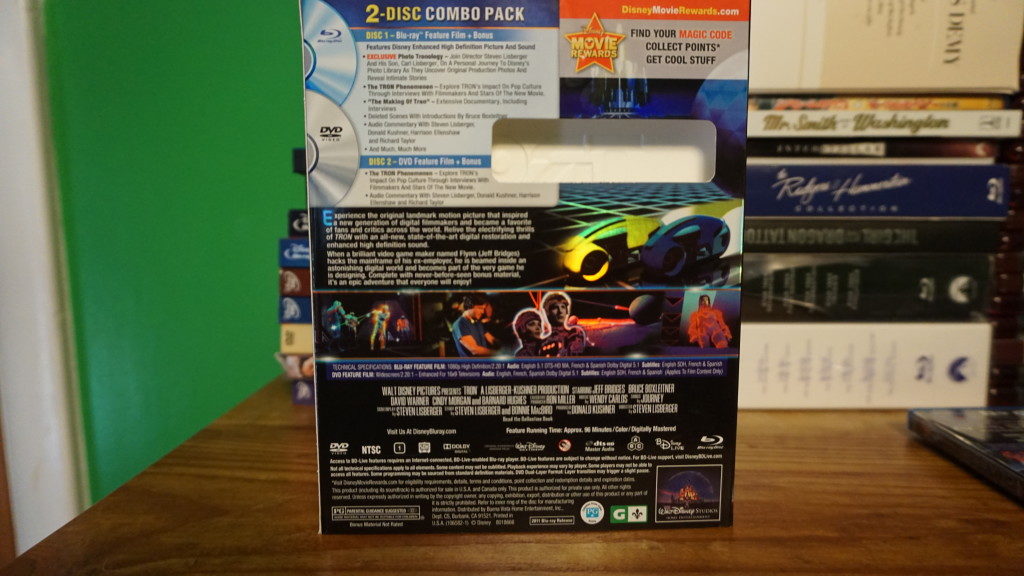 The first of the new features is called, “The Tron Phenomenon.” This feature is a retrospective, in which members of the cast of Tron Legacy and Tron, as well as production crew from both films reflect on the impact that Tron has had on their life, and how its inspired them throughout their lives. There are some interesting comments, especially from director Steven Lisberger, in which he shares some of his thoughts on how Tron’s legacy had developed. 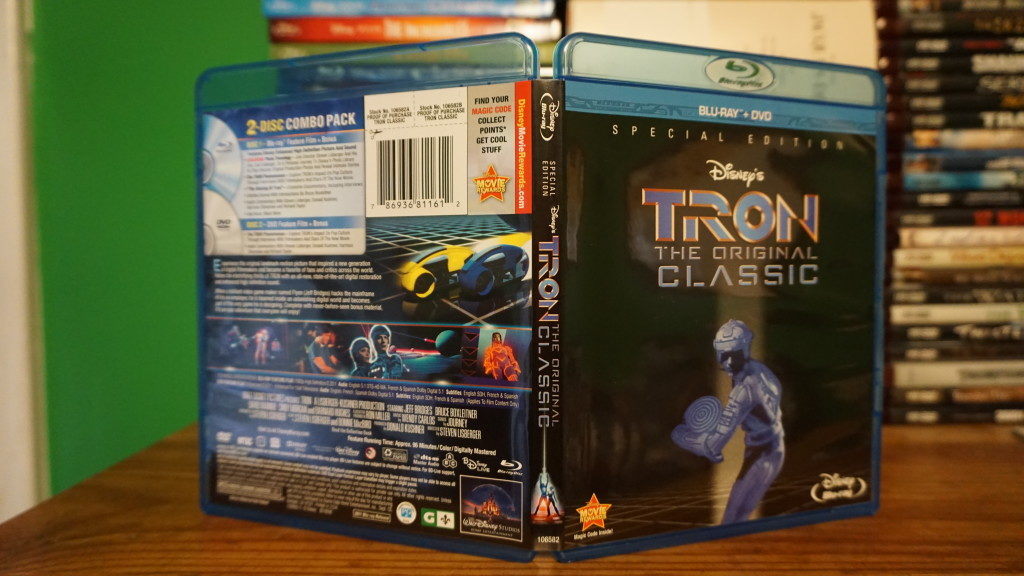 The second new feature, titled, “Photo Tronology,” is an intimate, father-son trip back in time, as director Steven Lisberger takes his son to the Disney archives to look at photos taken during the production of Tron. His son, an avid fan of his father’s work, gets a chance to look into the past to see his dad and the crew working on the set of Tron, and there are just so many cool moments to explore between the two of them. This one hit me pretty hard, as it reminds me a lot of the love I have for what my father used to do, so this one is a real treat.

The rest of the film’s features, while incredibly comprehensive, such as some deleted scenes, artwork, “how they made the film” features, and a really nice commentary, are all recycled from previous releases, and exist under the “DVD extras,” menu. They’re great, but have aged really, really poorly in terms of that they are all standard definition upgrades. True fans of Tron will have already seen these and moved on. Others will find a treasure trove of Tron oldies, but goodies. Overall, the new features are short and sweet, and the old stuff is retreaded ground. 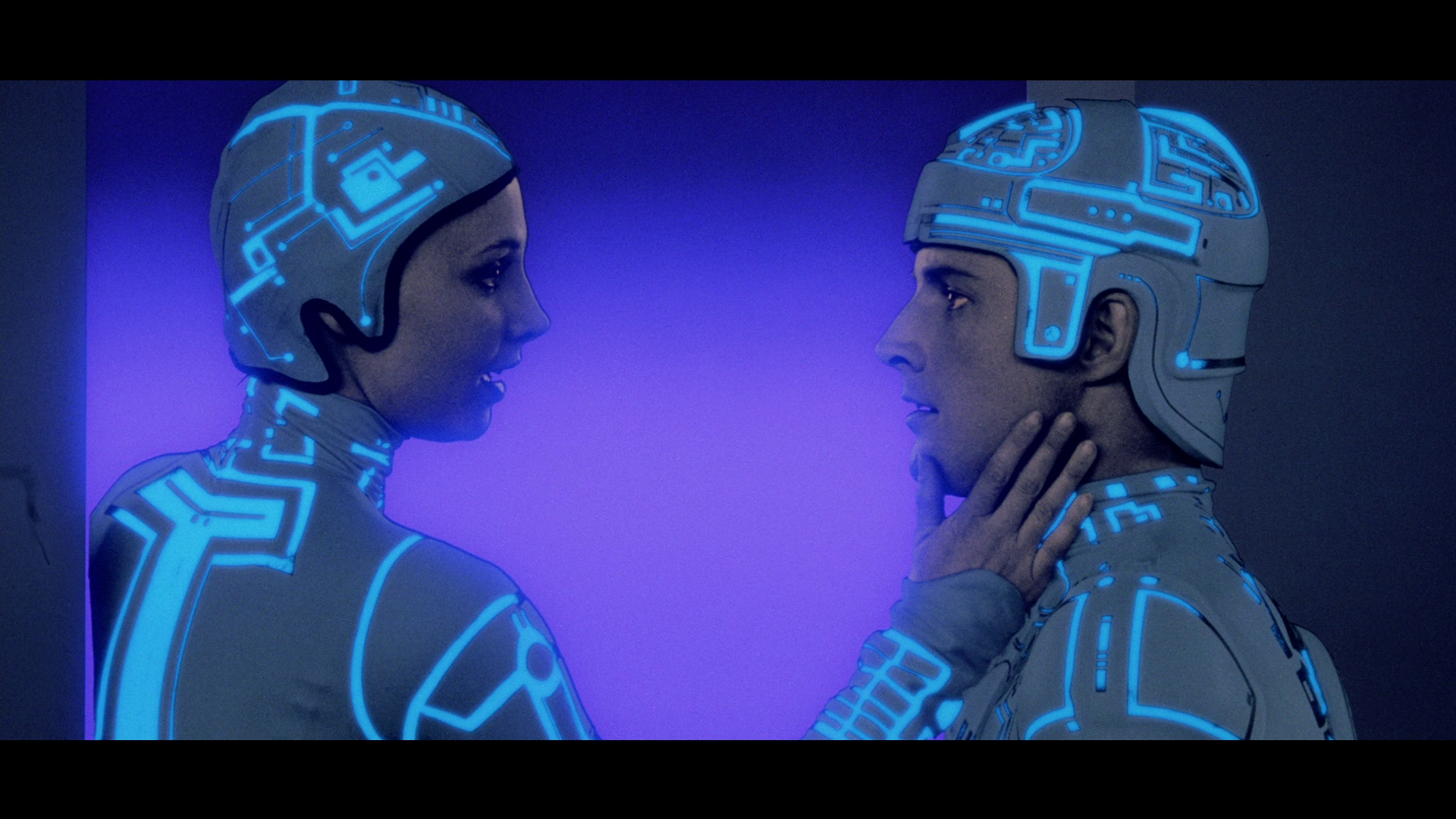 Tron is a technical achievement, and the perfect film to kickstart the 70mm Classics series of reviews that I’m going to be doing. The film is fun, never drags, and features some great performances from an enthusiastic cast. The blu ray takes full advantage of the film’s high resolution source materials to recreate the film’s heavily stylized look and sound with incredible results. The new features for this, “special edition,” are pretty light, and the bulk of the material is all recycled, some of it from the Laserdisc era. Once you’ve had your fill of the film’s gorgeous presentation, there isn’t a whole lot to keep you invested in the world of Tron, unless you’ve never owned any of the previous editions of the film. The film can be had for as little as $13 at time of writing. If you’ve never seen it, or you’re itching to relive the experience of being dropped into the world of Tron, now is the perfect time to do it.