Guardians of the Galaxy – Best Buy Exclusive (US, also available at Zavvi UK and other international retailers)

The Guardians of the Galaxy Steelbook is one of the nicest examples of using the Steelbook packaging in the right way. Typically, Steelbooks feature some sort of scene from the film, the theatrical poster art, or an iconic character. With Guardians of the Galaxy, Marvel opted to design their packaging around Star Lord’s cassette player, which is the driving point of the entire soundtrack (which made the movie so fun) and plays heavily into the plot of the movie as well. Also, this Steelbook includes the 3D Blu-ray, the regular Blu-ray, a DVD, and a digital copy. Keep in mind, this was just $20 at release; how the times have changed. 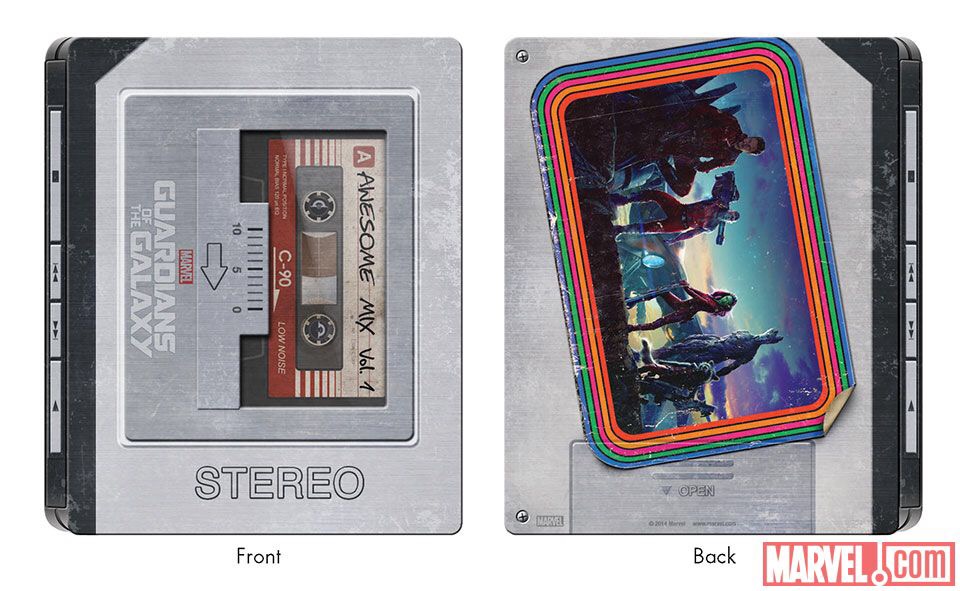 For such a unique film, it was so important that the Steelbook gave off the same vibe that the film had, and thankfully Marvel delivered. I actually prefer the US artwork on this release to the Asian and European Steelbooks, which is a rarity in the otherwise plain and boring US Steelbook market. At the time of release, this was one of those notoriously hard to find Best Buy releases, as scalpers and collectors flock to the store on release day. Right now, it does not appear on the Best Buy website and Zavvi marks it as “out of stock”, meaning it is most likely out-of-print (OOP), and eBay listings have been trending at around $20-$25 for a used copy, and $45-$55 for a brand new copy.

Whiplash was one of 2015’s best films, and Zavvi, the U.K. mega website which carries anything pop culture related, released a very nice Steelbook, after running an open-entry contest to decide on the cover art. The final result was a minimalist’s dream, giving us just a slice of a golden cymbal on a black background, slightly splattered with blood. It really spoke to me, as a fan of minimalist artwork myself, and I think that it subtlety captures the essence of the film. The metallic cymbal looks amazing on the Steelbook, and the gold spine is a nice addition to increase the “shelf appeal” of this release. 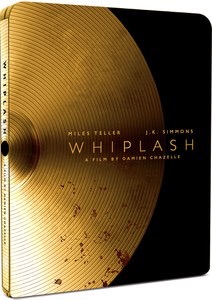 Buyers from all over the world will be happy to know that this Steelbook has been confirmed to be Region Free, meaning it can be played on any Blu-ray player. You can grab this one as long as it remains in stock from Zavvi for around £22, or roughly $35. It is pricey, but if you search some eBay listings or Amazon UK listings, it can likely be found for cheaper, as it does not have a numbered limited run like some of the other Zavvi Steelbooks.

There are many different versions of Pan’s Labyrinth available in the Blu-ray market, from the standard keepcase, to the Gold “Academy Awards” slipcover, and the Zavvi Steelbook and upcoming Criterion Collection release. However, my favorite of them so far (barring the Criterion, as I’ve yet to see that version in person) is the Mondo X Steelbook, which is a Best Buy Canada exclusive. Mondo, if you are unfamiliar with them, is well-known for their pop culture art and movie posters, and over the past few years have been bringing their art to the physical media world. In the US, you may have seen their work on The Thing, or Highlander, which were released as Target exclusive Steelbooks in 2015. 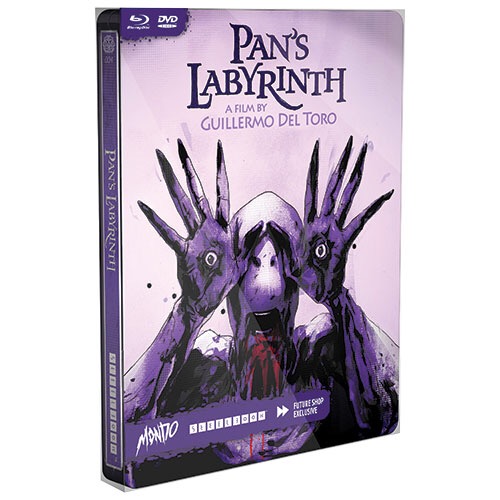 The Mondo artwork for Pan’s Labyrinth is stunning and uniquely colored, using a light purple that really looks great on a shelf. For Steelbook collectors, a little bit of color is never a bad thing, as so many releases have simple grays and blacks as their main color scheme. The inside artwork below is also really impressive, especially since most Steelbooks skip the interior artwork altogether. Mondo is known for their high quality artwork, and with this Steelbook of an excellent film, you can’t go wrong. 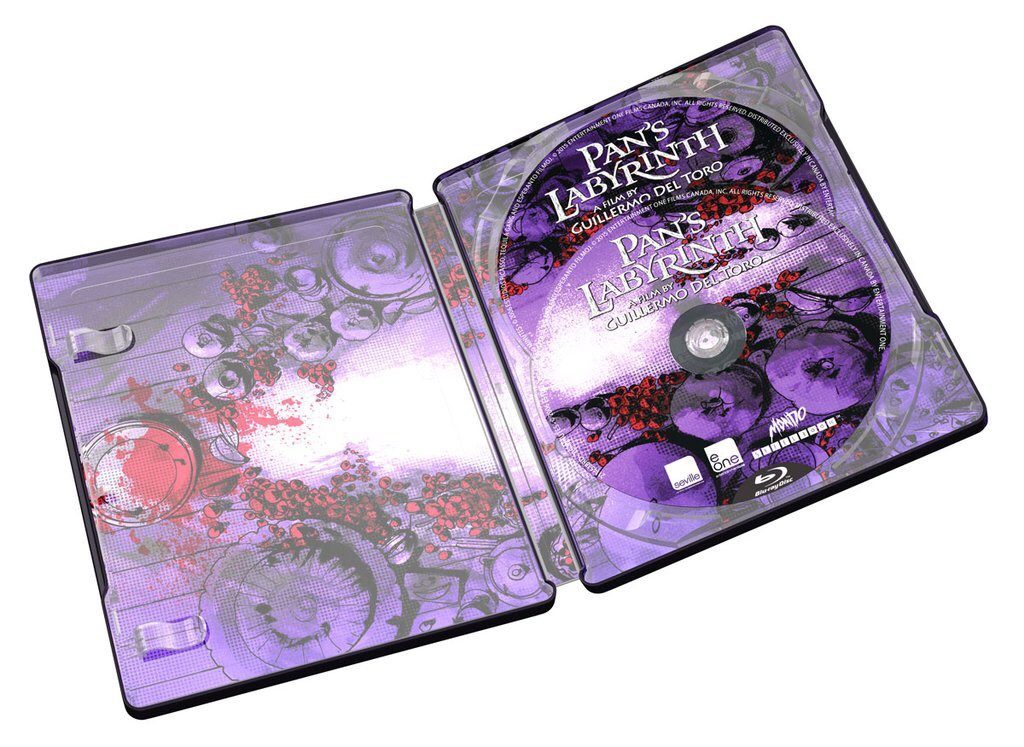 Sadly, for buyers outside of Canada, Best Buy Canada does not ship outside of the country, and so the only way to get your hands on a copy of this Steelbook from outside of Canada is through a group buy, which some of the wonderful users in our Reddit community put together, or on eBay, where you will certainly pay a premium for the convenience.

Frozen is another movie that has tons of packaging options, from the standard 3D Blu-ray combo packs to various Steelbooks and unique slipcovers all over the world. BluFans, a Chinese distributor of very high end Steelbooks, blows all of these other versions away. Typically with BluFans, there are a few different variants of each Steelbook release, with a different slipcase or slight packaging variation on each variant. I chose my favorite of the four available options (seen below) which features a lenticular slipcover and the full 3D Blu-ray combo pack. Either way, this release is a must-have for Disney collector! 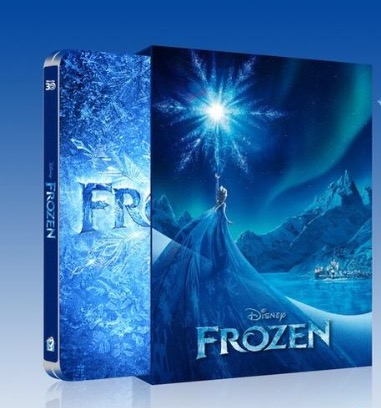 The Steelbook itself is simple enough, with a nice Frozen logo on the front surrounded by snowflakes, and some very bright, stunning colors. This is sure to look great as a display piece, but the total package is what puts this release over the top when compared to other Steelbooks. Inside are a few movie postcards, and Elsa-themed booklet, and a lyric book in both English and Chinese. 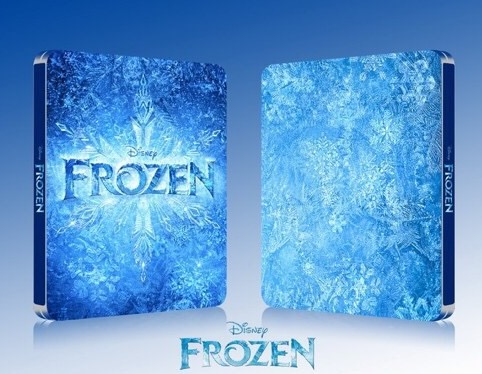 Now, before you run off to find this one, it was limited to just 500 copies and sold out quite quickly. Sold listings can be found on eBay ranging from $80-$120 depending on condition, but for high-end collectors, it might be worth the price tag. I will leave that decision up to you and your wallet!

Now that we’ve covered the OOP, expensive, or otherwise hard to acquire Steelbooks, here’s a beautiful one for the masses. The Longest Day is one of cinema’s most famous WWII epics, and the Steelbook from Zavvi is equally as impressive. There is nothing to be added in terms of extra pieces, 3D discs, special features, or anything special from a content standpoint, but if you’re going to own this film, this is the only way to do it. 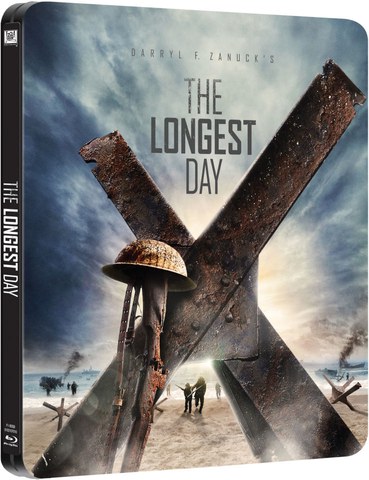 The Steelbook features artwork from the Normandy Beach scenes, with the iconic “hedgehog” (these X-shaped steel structures were used to keep tanks and amphibious craft off the beach) featured front and center with the movie’s title. On the inside, there is a still from the film, with a few of the soldiers who have worked their way up the beach, and the back cover features one of the Allied boats dropping off a group of soldiers on Normandy Beach. Thankfully for you, your mission to find this Steelbook will be much easier than the D-Day invasion. You can pick this one up right now from Zavvi for around £8, or roughly $10.

What do you think? Did we miss one of your favorites? Do you have a hidden gem that you want to share? Leave us a comment below or share a thought with us on Twitter or Instagram. We will be sure to share the best comments with our social media audience!