The 39 Steps, or as I like to call it, “Hitchcock Begins,” is one of Hitchcock’s most important pre-Hollywood films. Thought by many to be the first true Hitchcock thriller, the picture presents many of the plot elements and stylistic choices that would become famous in later Hitchcock classics such as North by Northwest, and Vertigo. Released in 1935, The 39 Steps shows us some of the earliest incarnations of his most famous themes, such as a general distrust of authoritative figures, a man in the wrong place at the wrong time, icy blonde female leads, and of course, the overarching theme of romance, which is centered at the heart of nearly every one of Hitchcock’s films. 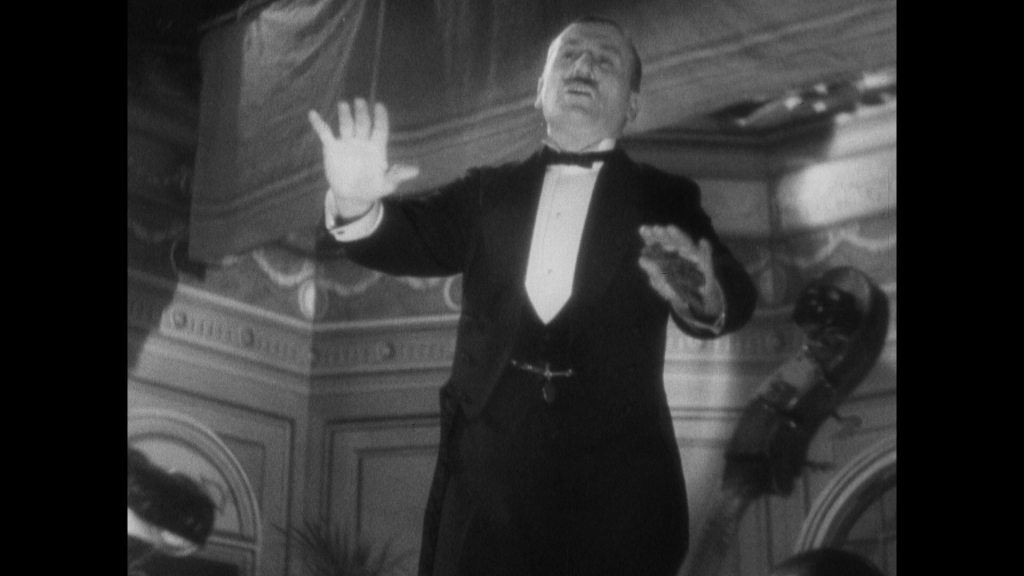 The movie follows the story of Richard Hannay, played by 30s British heartthrob Robert Donat. A Canadian in England on business, he’s dragged into an ambitious spy mission after offering shelter to a beautiful, mysterious woman. After being blamed for her eventual murder, he goes on the run, both to clear his name, and to finish the job that this woman started. His escape takes him to the Scottish moors, where he finds himself at the mercy of cranky countrymen, devious professors, corrupted officials, and ultimately a less than agreeable partner, played by Madeleine Carroll. She too has been dragged into this mess merely by coincidence, and her aversion is quite apparent . Together they learn to work together, to get to the bottom of everything, and solve the mystery behind the 39 Steps.

The 39 Steps has it all – exotic locals, action, and most of all, an incredibly amusing romance, that blossoms over the course of a thrilling criminal investigation. The dialogue is light and amusing, cementing the chemistry between our two leads as believable and vibrant. The chase to find out the mystery behind the much talked about 39 Steps is engaging, and exciting, in typical Hitchcock fashion.

That being said, the film isn’t all perfect. It doesn’t challenge us to think, as many later Hitchcock films do. It serves as a perfectly comfortable story, with a happy ending and a fairly conventional plot structure, which is rather typical of Hitchcock’s British films. The score is light, and unmemorable, so much so that our two composers, Jack Beaver and Louis Levy go completely uncredited. The film’s cinematography, overseen by Bernard Knowles, is fairly unremarkable, featuring brightly lit stage sets, and very little in terms of contrast or any of the other things that we will come to know from later Hitchcock classics. 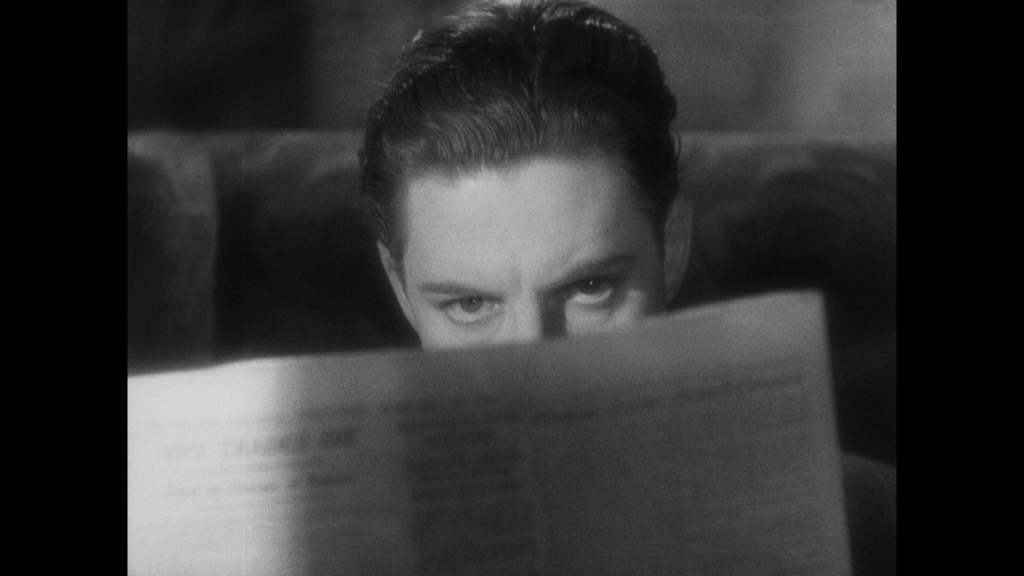 The 39 Steps serves as a template for many of Alfred Hitchcock’s later films, one that he would innovate and rework into an art form over the next three decades. It is a spring board, from which many, arguably better, films have sprung, and it should be viewed and studied as such. Production values are acceptable, if not a little cheap when viewed under the magnifying glass of Criterion’s Blu Ray, but it does little to detract from an entertaining starting point for a long line of classic Hitchcock thrillers. The 39 Steps is an engaging, fun movie with a satisfying conclusion. It comes with a hearty recommendation.

Criterion’s Blu-ray, which dates back to 2012, was created from a fine grain 35mm master positive, which was carefully cleaned and polished for this Blu-ray release, mostly likely using a 2K resolution scan. The film is presented in its original aspect ratio of 1.33:1 in 1080p, with black bars on either sides of the frame. 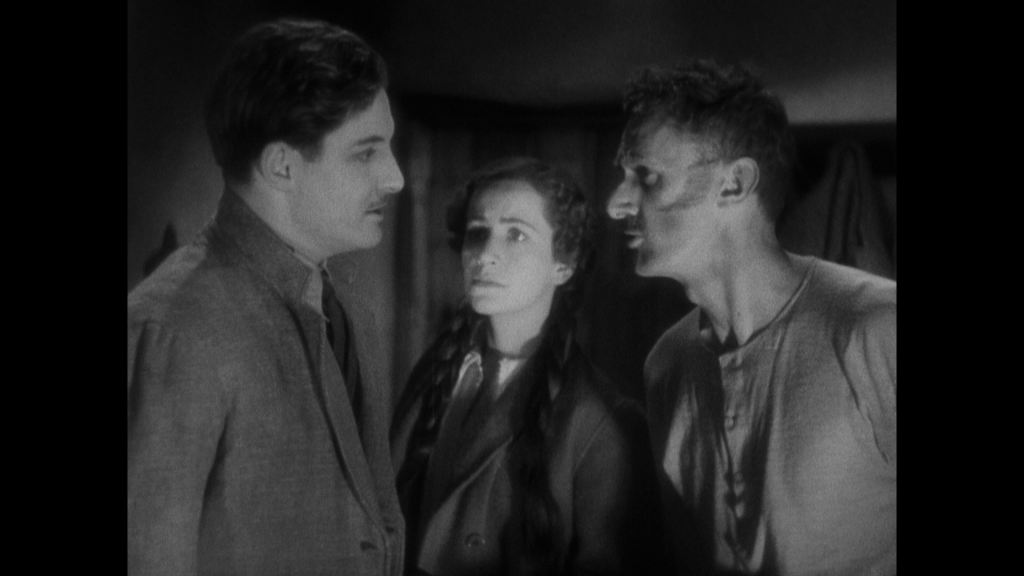 The 39 Steps is a bit of a mess. The picture bobs and weaves, especially during the opening titles, and there are frequent scratches and miscellaneous damage present through the film. The master positive is at minimum, one generation away from the original negative, but given the fact that the film’s presentation is overwhelmingly soft and grainy, I’d put money on it being a few passes further. I’d like to give it a pass due to its age and condition, but man it looks rough. Luckily, there is little to speak of in terms of density issues, and fading is a minimal issue. 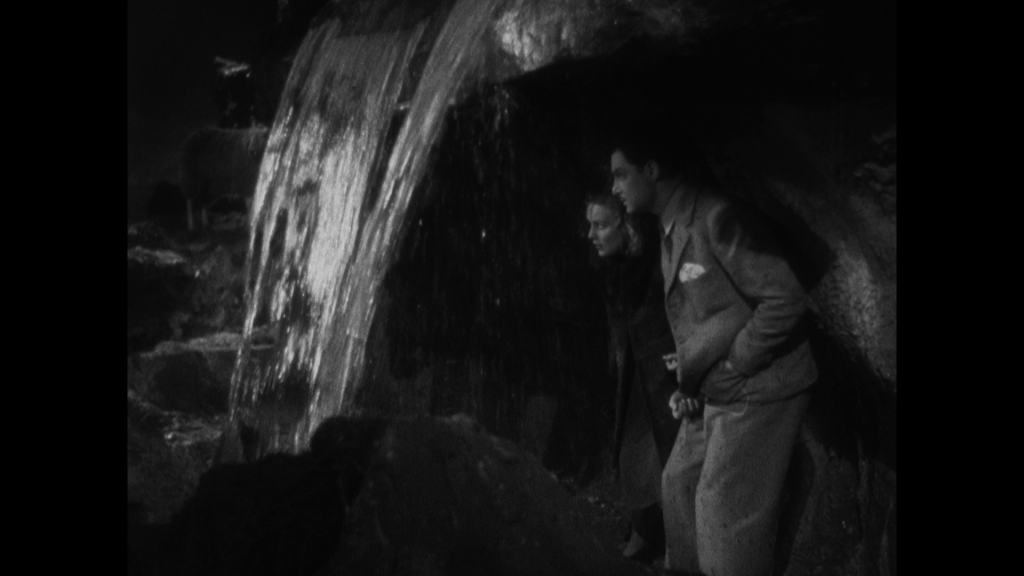 I don’t expect there to ever be a major restoration effort laid down for The 39 Steps. Considering how much damage and issues remain with the image presented here, I can only imagine just how bad the remaining source materials for the film really are. A proper rejuvenation would require a lot more money and time, and potentially even a newer scan on the material, and the potential to make a financial return just isn’t there.  This presentation didn’t necessarily impress me, but I’ve definitely seen far worse in my day. If anything, the damage, grain, and softness make it look awfully…….authentic? Take that as you will. 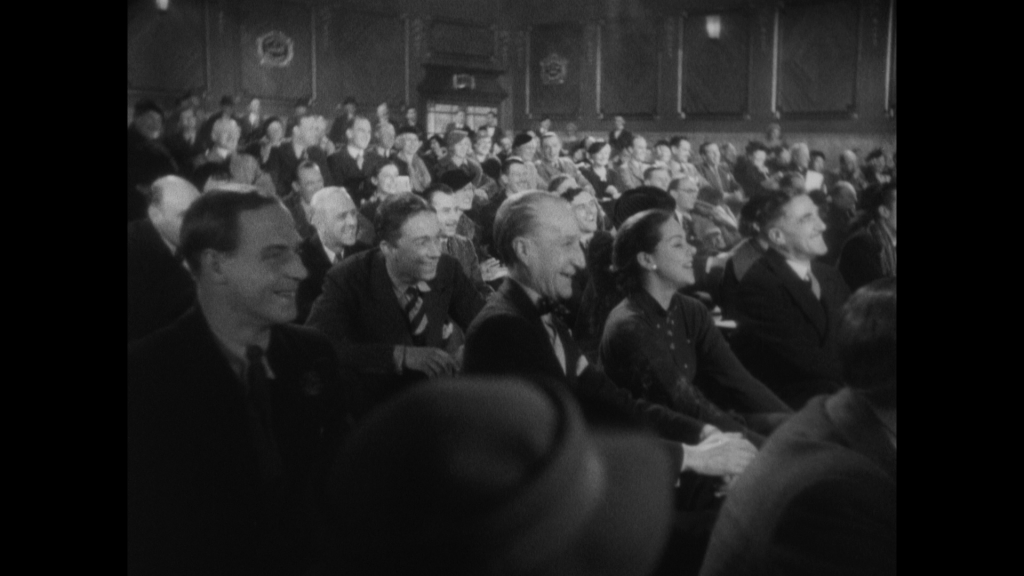 The 39 Steps‘ Mono LPCM 1.0 soundtrack was sourced from a 35mm optical track print, and remastered at 24 bit using Pro Tools HD. Mumbo jumbo aside, The 39 Steps sounds perfectly acceptable on Blu Ray. The track is relatively clean, without any noticeable hiss or pops that plagued earlier releases of the film on home video. The track however, suffers from mild distortion, and issues that are typical of a 1935 feature. On occasion, dialogue is slightly difficult to understand at a few moment during the film, but these sorts of problems are rather minimal. The 39 Steps will never sound incredible, but given its source limitations, Criterion has presented the film with the best audio possible.

Criterion Collection’s release of Alfred Hitchock’s The 39 Steps comes in a standard Criterion issue clear keepcase with a spine number of 56. The front artwork features a stylish poster for the film, featuring a composite of various elements from the film. The back artwork continues that same trend, but mostly features writing about the film, the features included, and technical information about the release. The inner artwork features the chapter, composited on top of a shot of Hannay trying to escape from the cops. A booklet is included that features credits and more info about the presentation, as well as an essay titled, “Thirty-Nine Steps to Happiness” by David Cairns. The 39 Steps features excellent packaging, in typical Criterion fashion. 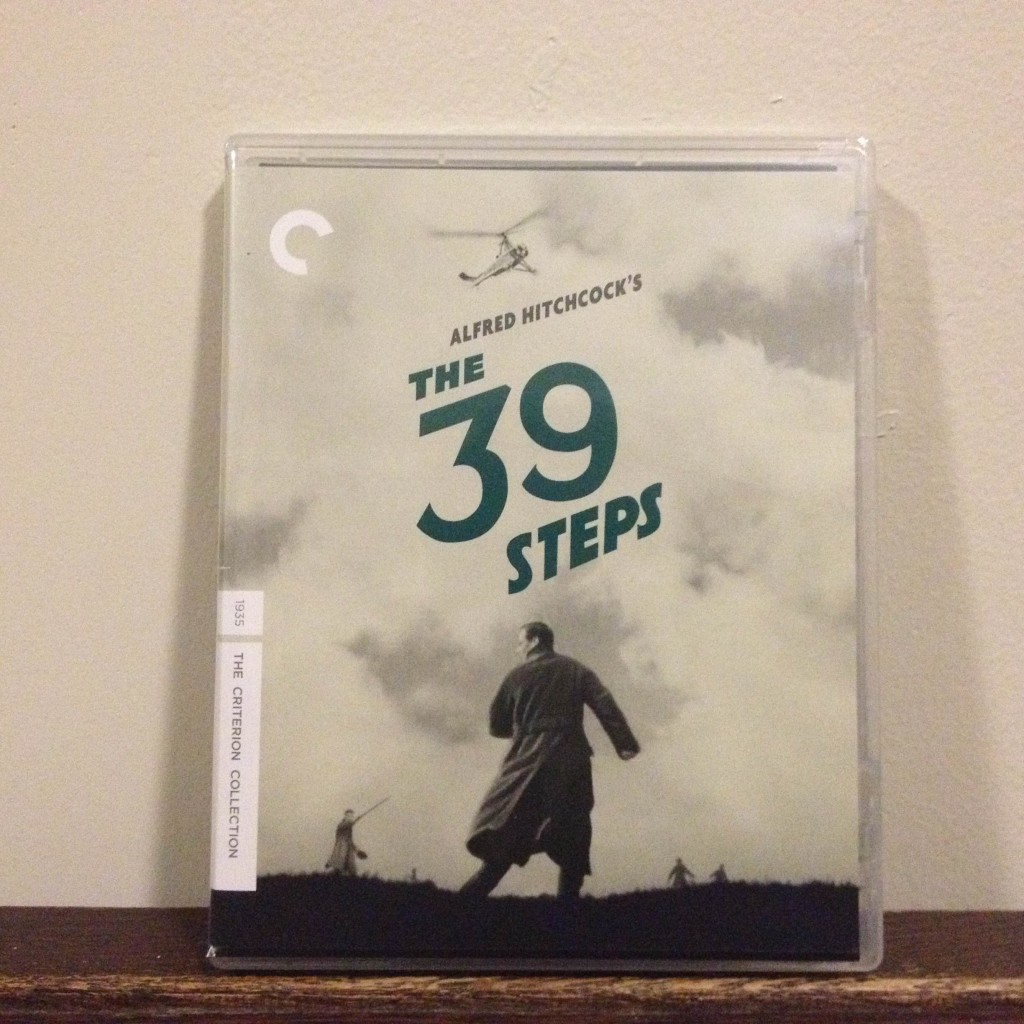 Also in typical Criterion fashion, The 39 Steps comes with a large sampling of supplemental features. They are as follows:

Footage from a 1966 Interview between Mike Scott and Alfred Hitchock – an older interview with Hitchock himself, in which they talk about various shots, designs, and influences that are present in his 1920s and 30s British movies. The interview covers everything from his days as a titler for silent film, all the way through his transition to Hollywood under David O’Selznick’s watchful eye. Listening to Hitchock dissect his own work is a real treat.

Hitchcock: The Early Years – a twenty minute long documentary that covers all of Hitchock’s substantial films, from the beginning of his career in Britain, to the release of his last British film, Jamaica Inn. Fairly standard documentary piece. 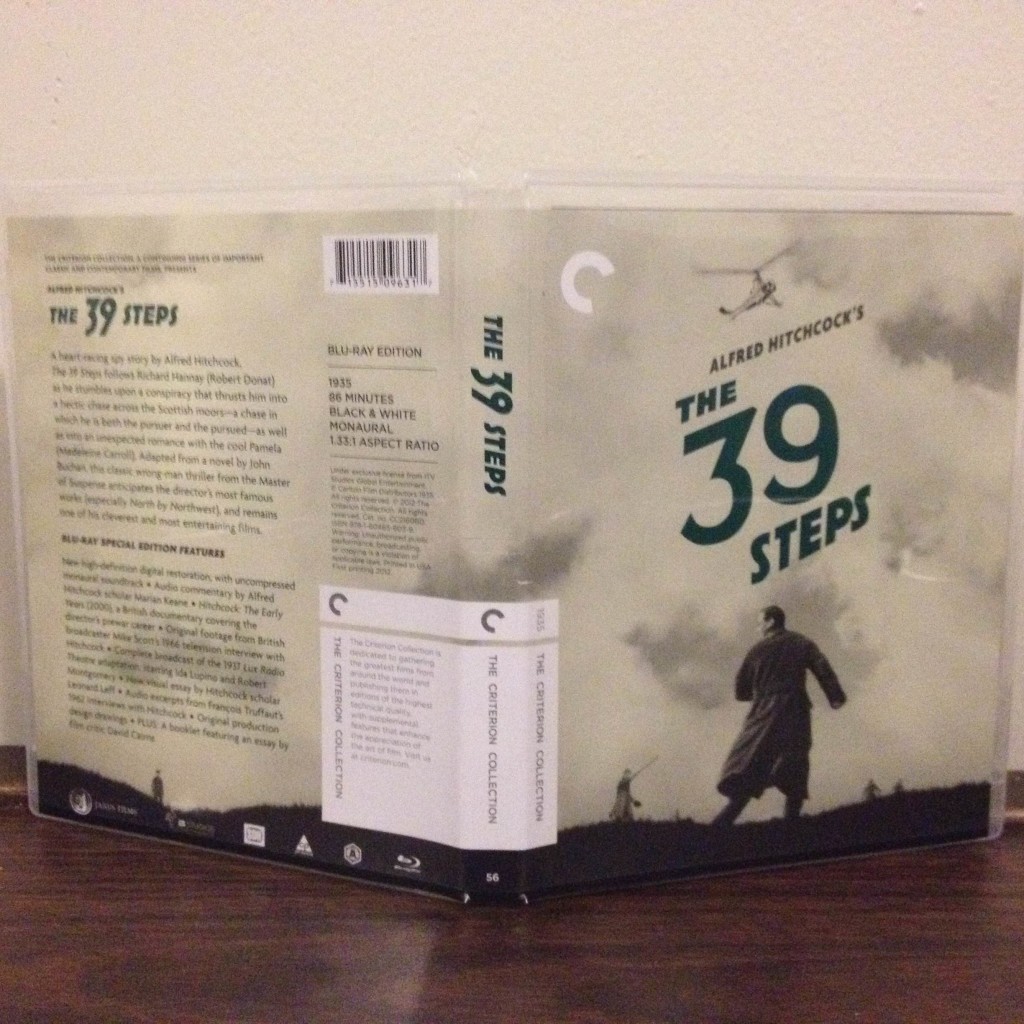 Complete Broadcast of the 1937 Lux Radio Theater Adaptation of The 39 Steps – an hour long, abbreviated version of the same story told in the film, through radio. It makes for an entertaining listen, and clocks in at about a hour, with some neat vintage commercials contained within.

Visual Essay by Leonard Leff – an essay that uses clips from the restoration of The 39 Steps, in which resident film scholar Leonard Leff dissects the film as a literary adaptation, and as a Hitchcock film. Leonard knows his stuff, but speaks in a slow, kind of boring voice that reminds me of a high school teacher I once had. Hoo boy.

Audio Excerpts from Francois Truffaut’s 1962 Interview with Alfred Hitchcock – a clip from the legendary interviews the that famous French New Wave director did with Hitchcock, mostly about his work on The 39 Steps. Fairly involved, but interesting.

Audio Commentary by Marian Keane – a rather formal commentary for the feature, in which our resident Hitchcock scholar does various scene analysis for the feature. A nice inclusion, if you’re looking to dig deeper into the film, but pretty dry.

Production Design Drawings – nothing too crazy, but another set of insight into the film’s production 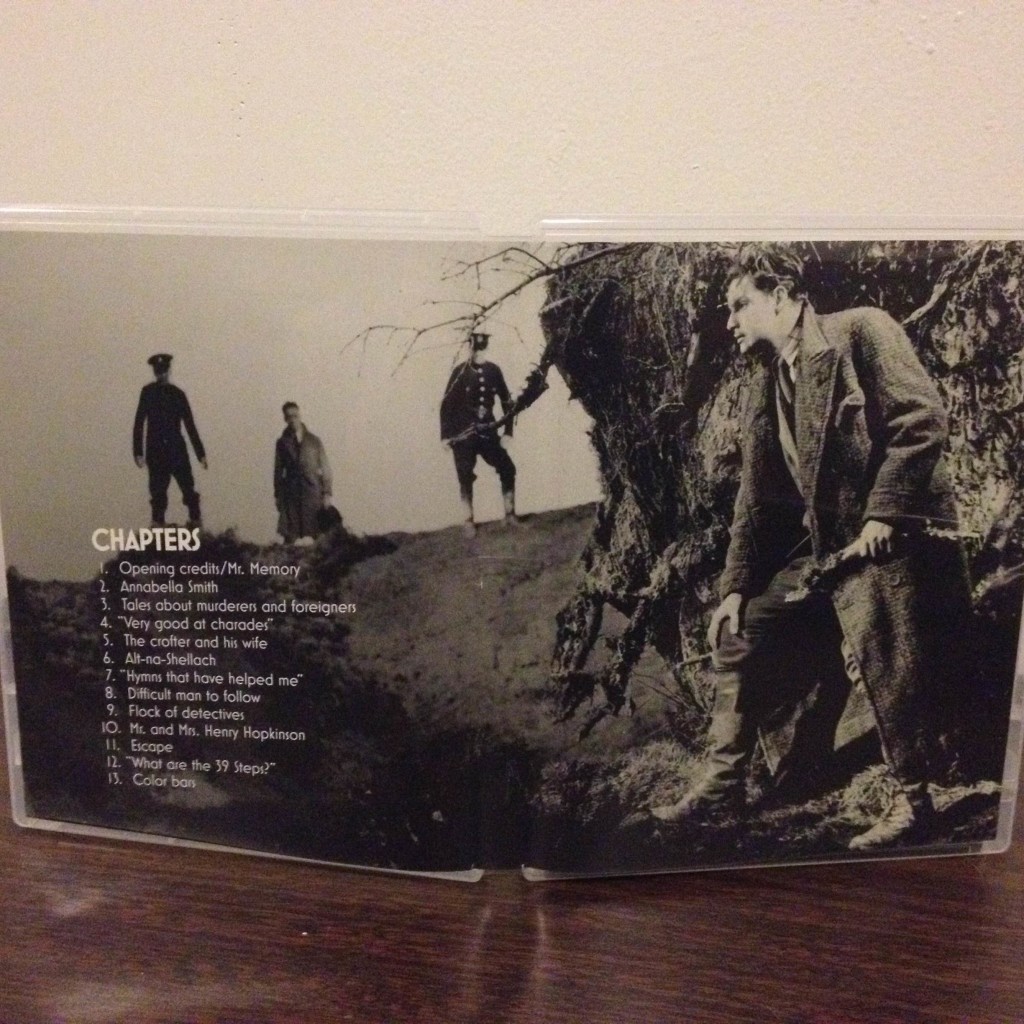 Criterion’s treatment of The 39 Steps in terms of packaging is fantastic. The special features set falls more into the scholarly realm of analysis, but the interviews with Hitchcock himself are must sees. Everything else is strictly for those who wish to study The 39 Steps. 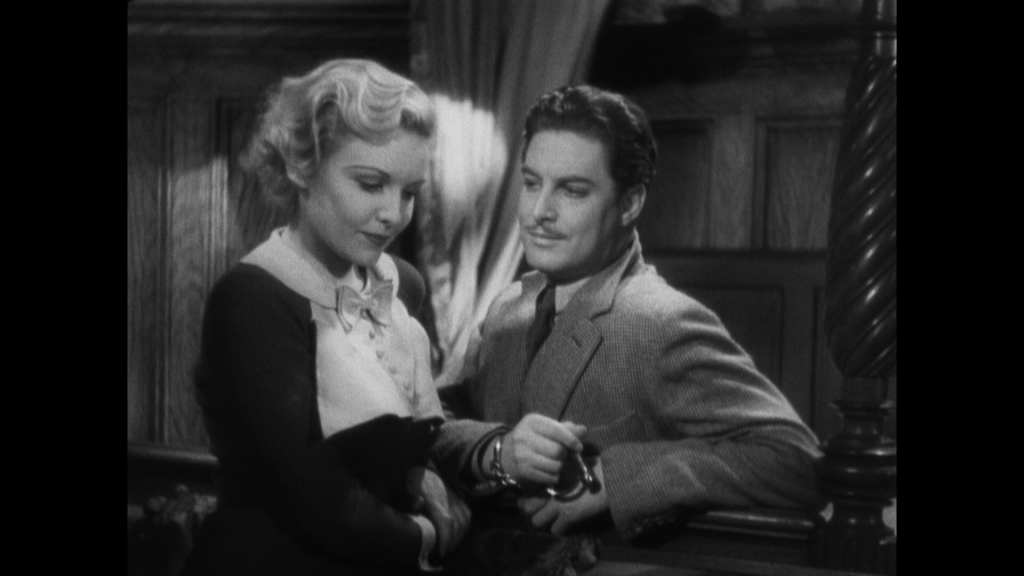 The 39 Steps is the perfect place to start with pre-Hollywood Hitchcock, especially for fans of North by Northwest. It’s engaging, fun, and lays down the framework on which Hitchcock’s later films would be based on. The script is sharp and witty, and the production values are fairly standard for the era. Criterion’s video restoration is a bit of a mess, understandably so, and the audio presentation provided is adequate for viewing the film. The packaging is fantastic, and the special features that are included are nice, if not a bit dry for the average viewer. This is definitely a release geared towards Hitchcock scholars, but is definitely worth your time if you’ve never seen it before.