Beauty and the Beast, a 1991 animated feature released by Walt Disney Studios, stands that the ultimate triumph of the Disney Renaissance, a period of time that last from the release of The Little Mermaid in 1989 through the release of Tarzan in 1999. The period emphasized complex characters, detailed and colorful animation, and a brilliant synergy with successful Broadway composers to create exciting and endearing animated films. It was Disney’s last ditch effort to escape irrelevancy in the face of new studios such as Don Bluth Productions, and was incredibly successful, driven by critical and box office successes throughout the decade.

Beauty and the Beast, based on the classic French fairy tale of the same name, tells the story of a handsome prince who is transformed into a monster after turning away a disguised enchantress. His only chance to escape his fate is to find true love before the last petals of an enchanted rose wither away. After completely turning away from society due to shame, his chance wanders into his life after he imprisons Maurice, father of Belle, a beautiful young woman who feels disenchanted with the simple life she leads in a small town in France. In exchange for his freedom, she takes his place as the beast’s prisoner. Knowing she might be his only chance at breaking the spell placed on him and the members of his household, he must break through his rough exterior, and win her heart. Not only that, but Belle must fight off Gaston, a brute who wishes to marry her only for her beauty, and his supporters and their schemes, in a climax that may destroy the both of them. 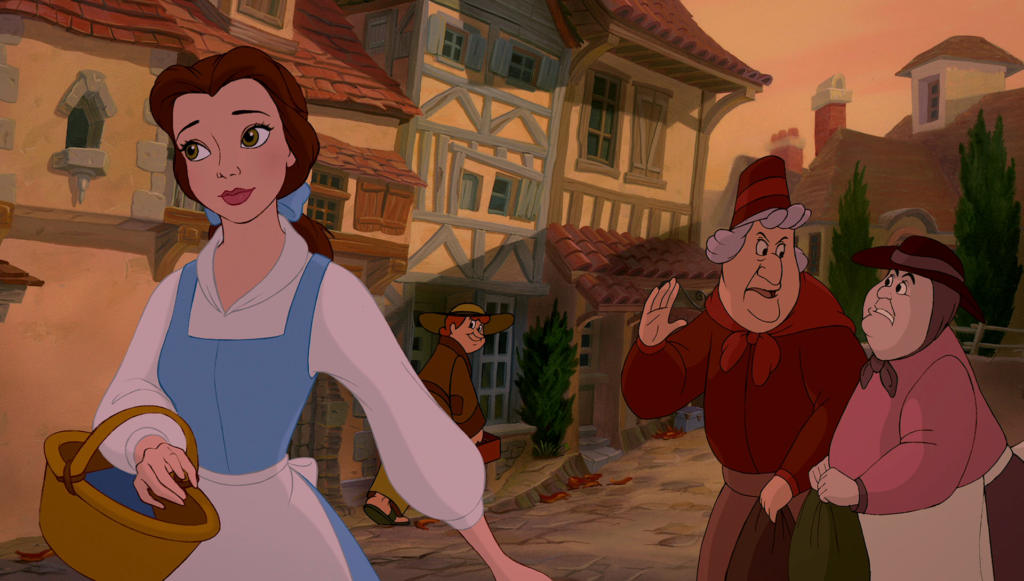 Beauty and the Beast is a solid one-two punch from start to end. The Beast is truly one of the greatest characters ever brought to the screen by Disney. His transition from the isolated, angry, selfish creature he is at the beginning of the film to a warm, compassionate, and open character is an absolutely delight. It’s refreshing, even now in 2016, to see a character able to undergo such an effective and entertaining transition in a 90 minute film. Belle, the true main character of the story, is just as dynamic and fun to explore, as we watch her prejudices and fears melt away regarding the cold and distant Beast, as well as the way she is crafted through the lens of feminism.The way she rejects gender norms in renaissance era France is something we could stand to use a bit more of today in television and feature film writing. Their chemistry onscreen is practically tangible in the best way. 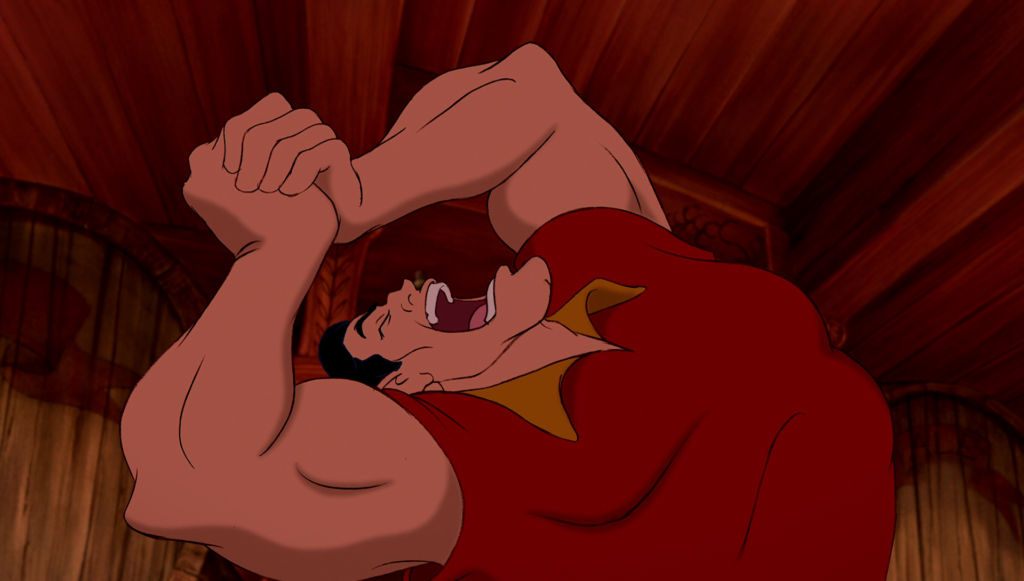 It even has a rock solid cast of supporting characters – Gaston stands out, not as one of the most complex villains Disney has ever crafted, but one of the most true to life. He’s liked solely for his good looks and charisma, and is one of the few children’s film characters to even subtly tackle concepts such as fear-mongering and the like. Watching it in 2016, there are some especially concerning parallels between Gaston and figures in our own life, as Gaston preys on feelings rather than listening to reason. His partner, LaFoe, is one of the dopiest, most amusing yes men I’ve ever come across. I don’t even have anything else to add – that’s his entire character, and it works so well that you just want to punch him every time he opens his mouth. On top of that, you have the delightful cast of household items, such as Cogsworth, Lumiere, Chip, and Mrs. Potts who light up the screen, and lay the foundation for some of the film’s most extravagant musical numbers. It all just fits together so comfortably.

Each character is brought to life through an incredible voice cast featuring the likes of Paige O’Hara, Robby Benson, Angela Lansbury, Jerry Orbach, and Richard White, but the true star of Beauty and the Beast is the animation team. Their work is absolutely incredible – each line is practically perfect, embodying the best and most ambitious animation that Disney has ever created. The backgrounds have incredible activity and depth, and the coloring is perfectly saturated as a result of the production team’s fantastic application of the CAPS computer animation software to color the hand drawings.

Beauty and the Beast also marks the final collaboration between songwriter Howard Ashman and composer Alan Menken, who worked together to write the film’s incredible, and award winning soundtrack. Theirs songs are practically household classics at this point, with showstopping numbers such as “Be Our Guest” and “Beauty and the Beast” standing out as highlights. Unfortunately, Ashman passed away during production due to HIV complications, which makes his work on the film especially impressive. 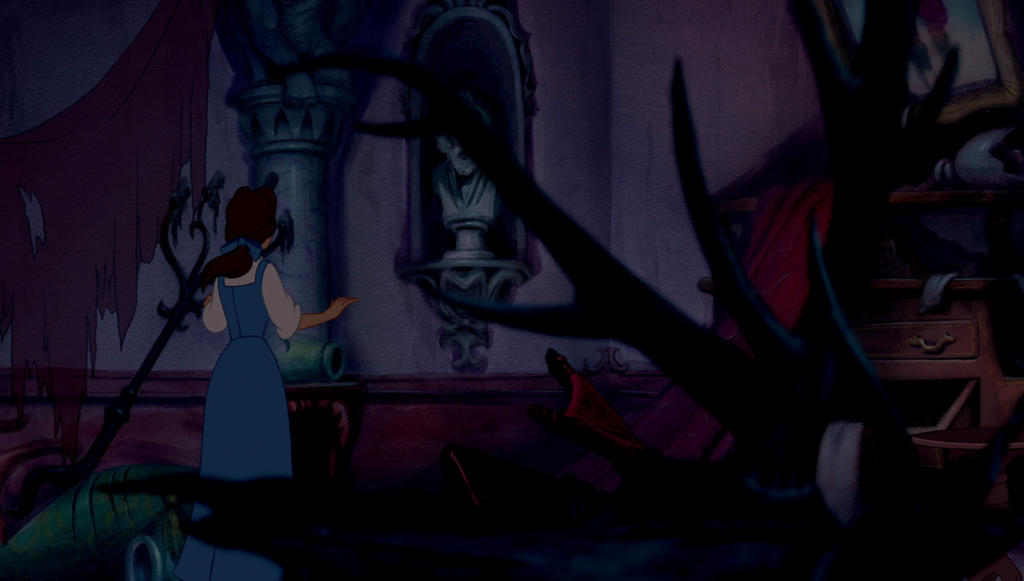 I have always felt incredibly close to Beauty and the Beast, growing up with the film, and rediscovering it as a young adult on Laserdisc. The songs are spectacular, the film incredibly well written and paced, filled to the brim with amazing animation and entertaining characters, and is to me is the finest triumph of the Renaissance era productions. This is of course echoed in its period critical reception, as the film was the first ever animated film to be nominated for the Academy Award for Best Picture in 1991, a feat that would not be repeated again till 2009. It is truly a triumph, and has aged like fine wine.

Beauty and the Beast was animated by hand, and then digitally scanned and painted using the CAPS animation system. The movie was rendered at 2K at an aspect ratio of 1.66:1, and presented theatrically in the United States using the standard flat aspect ratio of 1.85:1. This Blu-ray, presumably sourced from the same digital master used to create the original Blu-ray release of Beauty and the Beast, is presented in 1080p, using a 1.78:1 aspect ratio, which sits comfortably between those two ratios.

As a stubborn, angry home video enthusiast, I could probably whine all day about the color timing shifts between the original theatrical release of Beauty and the Beast and this Blu-ray transfer, which is slightly brighter and more saturated than say, the Laserdisc presentation on the film, but I have to admit, Beauty and the Beast looks incredible in 1080p. Taking advantage of the digitally animated source, the film is crystal clear, and pin sharp across the entire 1.78:1 image. Hand animated faults, individual lines, and shading are presented as if you were looking at the original drawings. At times, it looks so clear that it feels artificial, but that’s only because of how flawless it truly is when compared to previously limited home video presentations. I love it. You should love it too. 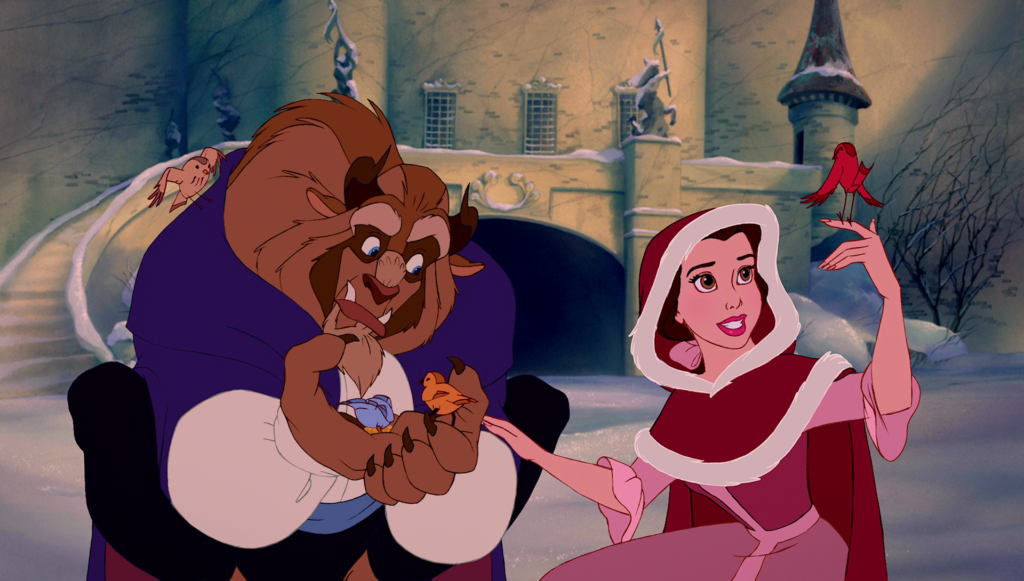 Run in 5.1 through my test system in DTS-HD Master Audio, there are various moments in the film where it will randomly just increase in volume. This volume change will be accompanied by the center channel audio becoming mirrored in the left and right channels, causing an unpleasant echo effect that ruins many of the film’s larger musical numbers. This occurs over all 3 presentations of the film.
Because I own the original Blu-ray release of the film, I tossed it in for comparison, and found that the original 7.1 DTS-Master Audio track run in 5.1 has none of these issues. As a result, I have reached out to Disney for their thoughts, and will report back with a score if anything conclusive comes up.

Beauty and the Beast: 25th Anniversary Edition, released to home video by Walt Disney Home Video, is presented in a standard blue keepcase, with a slipcover. The front artwork, which is identical on both the case and the slipcover, features a minimal composite of the Beast and Belle, along with the enchanted rose. Both are adorned with the “Walt Disney: The Signature Collection” emblem in the bottom left corner. The back artwork is even more sparse, featuring Chip, Mrs. Potts, Cogsworth and Lumiere, with the majority of the space dedicated to paragraphs about the film, digital copy info, a list of extras, technical specifications, and credits. The slipcover is nice and glossy, but overall the presentation is merely acceptable, especially when compared to earlier packaging.

This release also includes a DVD, which unlike the previous release, only features 1 presentation of the film.

3 Versions of the film – The film’s original, sing-along, and special edition, which features a new song that was adapted from the Broadway version of Beauty and the Beast.

Always Belle – an 11 minute feature, in which Paige O’Hara, the voice of Belle, reflects on her participation in the production of the film, and how it changed her life for the better.

Menken and Friends: 25 Years of Musical Inspiration – a 19 minute feature, which is essentially a roundtable discussion between Alan Menken, Stephen Schwartz, Kristen Anderson-Lopez, Robert Lopez, and Lin Manuel Miranda on Menken’s lasting influence. Basically, these guys all gush over the score and the songs of the film for twenty minutes.

The Recording Sessions – a 4 minute feature of the various voice recordings of all of the actors that were used to help guide the animators during the production of the film, imposed over the finished footage.

25 Fun Facts about Beauty and the Beast – a roundup of fun facts about the movie, hosted by Disney Channel stars Gus Kamp, and Kayla Maisonet.

The packaging is fairly standard, but the new features are phenomenal on this 25th Anniversary release. I just wish they hadn’t locked those classic features behind a digital wall….. 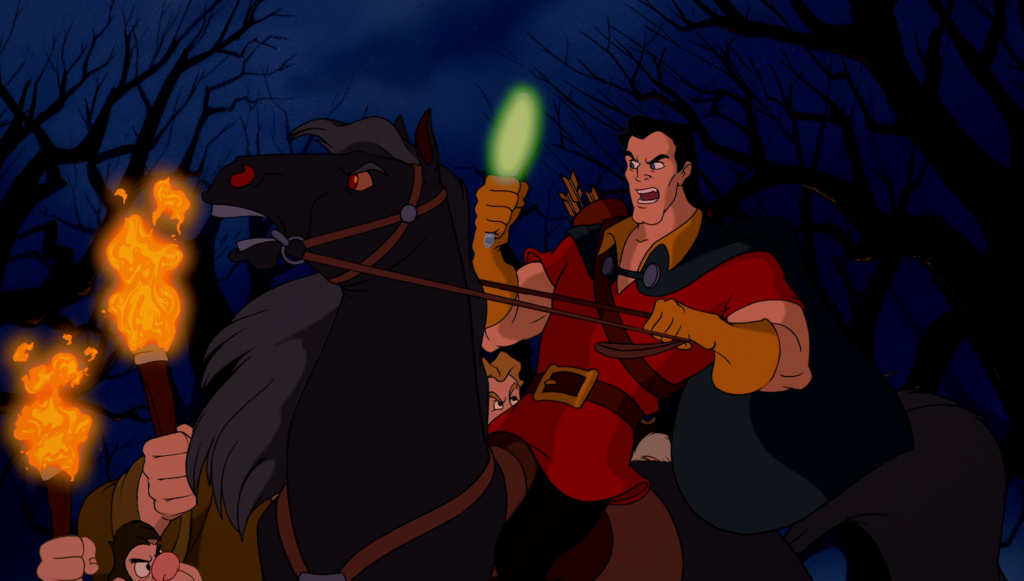 Beauty and the Beast is a triumph of animated film making, telling a wonderful story, backed by some of the finest animation and musical numbers ever committed to the screen. This new Blu-ray features excellent visual presentation, and a potentially defective audio transfer that will be looked at later. It features fairly standard, but pleasant packaging, and a fantastic set of new features. This release is fantastic, and is only held back by Disney’s boneheaded decision to lock all of the film’s previous features behind their digital streaming wall. Other than that, this release is absolutely recommended, once the audio issues are taken care of.