Taking place in the year 2067, the movie happens after the planet Earth had been devastated by climate change. With all planet life on Earth becoming extinct, civilization has collapsed around the globe, only one city in Australia has been barely able to hold out against these catastrophic changes, thanks to synthetic oxygen that’s produced by the Chronicorp corporation. However, this oxygen is tainted and gradually causes a deadly affliction known as The Sickness.

In the days following its release in the United States, 2067 ranked fourth on the US iTunes digital chart. According to the review aggregator, Rotten Tomatoes, the film holds an overall approval rating of 29% based on the reviews submitted from 24 critics. On Metacritic, the film has a score of 40 out of 100 based on the submissions of 7 critics, indicating “mixed or average reviews”.

2067 takes a considerably interesting subject and presents it in a way that, at least from what I could tell, many of us could relate to.  I only say that loosely because of the constant fight to preserve our natural resources here on Earth; but the fact that the year that this story takes place is still relatively within the possibility of happening in our own lifetime.  Overall, while the story was genuinely interesting and fun to follow, I feel that there could’ve been a little bit better execution to it.  I can agree that, as the oxygen levels are depleting, the world would be in mass hysteria; and this movie didn’t really give us much of a panic or tension setting to make that part believable.  Other than that, I had fun watching along with this one over this last weekend, and might have to give it another go here soon as time permits.

Overall, the Blu-ray copy of 2067 gives its viewers a considerably clean and extremely detailed visual presentation.  As it effectively shows us how things could possibly end up given  the depletion of a number of our natural resources today, the representation of a crisis of this caliber was very well mapped out and done in a way that makes it seem like it really could happen at any point in our lives.  As I watched along, the attention to detail that was given to the environmental elements was definitely noticed and really did a great job at making sure it was clean, clear and able to be seen and understood.

Packaged with an English DTS-HD Master Audio 5.1 audio track, the Blu-ray release of 2067 gives its viewers a nicely done experience that does a great job at pulling you in and holding your attention from beginning to end.  While it’s not as immersive as it could have been, the experience definitely made its presence known, and the more critical parts of the plotline had a nice emphasis surrounding them.  The transitions from channel to channel were effortless and made the overall surround experience very nice, and the dialogue was spoken cleanly, clearly and the characters were able to be heard and understood without the need to manually adjust the volume levels.

The Blu-ray release of 2067 comes packaged in your standard single-disc Blu-ray amaray case.  Within that case is the Blu-ray copy of the film.  Unfortunately, there are no DVD copies nor are there any digital copies of the film included.  The Blu-ray disc does feature the same artwork that’s been made available on the front of the case, particularly the lower half of the artwork.  There is a slipcover that’s been made available in the initial pressing of the release that also provides the same artwork as the case. 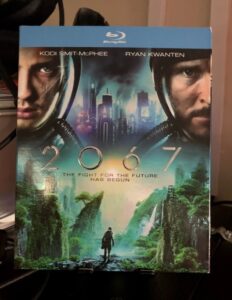 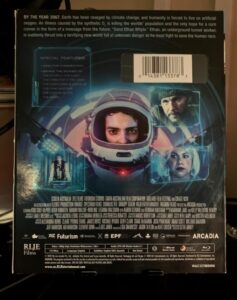 There are only a handful of special features that’s been included with the Blu-ray release of 2067.  I really liked that they included a good chunk of behind-the-scenes material as it offered not only more insight into the story and experience that the cast and crew were looking to share; but as well as the overall experiences that the cast had while they were making this film.  Included with this release is:

Overall, I thought that 2067 was a good time.  Sure, the movie could have been better with its crisis presentation; but I can’t really complain too terribly much because I don’t really know what the production crew had envisioned with this release other than the fact that the world is in the middle of a disaster and the impact is devastating.  The visual presentation of the Blu-ray copy was clean and offered no problems as things progressed along.  The audio track could have at least been a 7.1 mix and done a slightly better job at surrounding the viewers with the audio technology; however the use of the 5.1 mix wasn’t all that bad as everything was able to be heard without the need to adjust the volume levels.  The special features included with this release were nicely presented and offered a significant amount of insight into the work that went into making the movie happen.  If you’re looking to add this movie to your personal collection, I would definitely recommend checking it out.  2067 is available on Blu-ray and DVD today.