13 Hours: The Secret Soldiers of Benghazi (also known simply as 13 Hours) is a 2016 American biographical war film that was directed and produced by Michael Bay and written by Chuck Hogan, based on Mitchell Zuckoff’s 2014 book of the same name. The film follows six members of Annex Security Team who fought to defend the American diplomatic compound located in Benghazi, Libya after waves of attacks by militants on September 11, 2012. The film stars James Badge Dale, John Krasinski, David Giuntoli, Max Martini, Pablo Schreiber, and Tony Stephens.

Filming began on April 27, 2015 in Malta and Morocco. Known colloquially as “the Benghazi movie”, the film was released on January 15, 2016, by Paramount Pictures. Upon its release, 13 Hours received generally mixed reviews from critics and ended up grossing $69 million worldwide against an operating budget of $50 million, becoming Bay’s lowest-grossing film to date. The film received an Academy Award nomination for Best Sound Mixing at the 89th Academy Awards. 13 Hours caused a significant amount of controversy in Libya. Many Libyans believed that it had ignored the contributions of the local people who helped save the US ambassador. Libya’s Foreign Ministry spokesman, Salah Belnaba, denounced the film’s portrayal of the Libyan people and described it as “fanatical and ignorant.” Libya’s Culture and Information Minister, Omar Gawaari also criticized the film saying: “the movie shows the US contractors who actually failed to secure the ambassador as heroes”, adding that Michael Bay “turned America’s failure to protect its own citizens in a fragile state into a typical action movie all about American heroism.”

The film’s historical accuracy has been disputed. In the most controversial scene, the CIA chief in Benghazi tells the military contractors that are there, who seek permission to go defend the embassy to “stand down”, thus denying them permission. The real-life CIA chief stated that there was no stand-down order. His statement was echoed by the bipartisan Senate Intelligence Committee’s finding that there was “no evidence of intentional delay or obstruction by the Chief of Base or any other party”. However, no help was sent, even though officials at the highest levels found out about the attack within the first few hours of the 13.

Political issues aside, 13 Hours: The Secret Soldiers of Benghazi is a pretty powerful war movie that, without a doubt, will carry out to be one of the more notable modern warfare stories. The story as a whole is one that will grab you once its created the necessary foundation it needed to get things going, and hold your attention straight through until the end. The movie does a really great job at keeping its distance from the political commentaries, and really does a fantastic job at paying tribute to those who were unfortunately killed during these events.

Processed in from a 2K digital intermediate, the 4K UHD release of 13 Hours: The Secret Soldiers of Benghazi gives viewers a pretty solid visual experience that allows for this release to stand out over its previously released counterparts. With its utilization of HDR and Dolby Vision, the finer details in and out of the battleground are much more refined, and feature a higher contrast and sharper textures. The more intimate textures, like the sweat beads or the skin tones of the soldiers are more of a prominent feature as they really show the effects of war and the orders that were being carried out. The sharpness and the boost on color palette give audiences a much more enhanced visual representation of everything, really taking the display of these events to a new level.

Packaged with the same Dolby Atmos audio mix that’s been included in earlier released Blu-ray copies, the 4K UHD copy release of 13 Hours: The Secret Soldiers of Benghazi really does a phenomenal job at putting the viewers right in the middle of everything. While there really aren’t any improvements with this new format, the clarity and emphasis of everything just popped as it ripped through my home theater system. The transitions between channels were effortless and added to the experience, while the dialogue was spoken clearly, allowing for everyone to be heard and understood without any issues whatsoever.

The 4K copy of 13 Hours comes packaged in the standard two-disc UHD amaray case.  In that case, the 4K copy of the movie and a Blu-ray disc containing all of the special features.  There are no Blu-ray copies of the movie included with this release.  None of the discs feature any artwork whatsoever outside of the standard release text.  There is a digital copy that’s been included as well as a slipcover that’s been made available in the original pressing of the release. 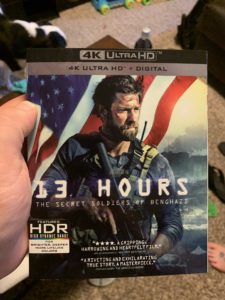 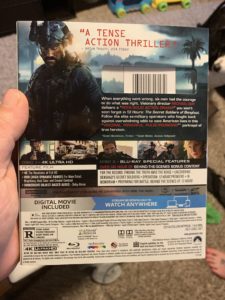 13 Hours: The Secret Soldiers of Benghazi is just like any other regular 4K UHD release as there are no special features included on the UHD disc. All available content is made available on the included Blu-ray disc. Included with this release is:

13 Hours: The Secret Soldiers of Benghazi is a pretty solid movie that gives its viewers a pretty action packed experience.  Regardless of the political questioning or the contested inaccuracies, it really does a great job at paying tribute to those lives that  were lost, and allows for audiences to really see a representation of modern day warfare.  The visual boosts that come with the 4K UHD format were enough to offer an noteworthy presentation, and allow for some aspects of the scenery to be noticed when they previously hadn’t.  The Atmos track doesn’t offer any benefit over the previously released copies, but you won’t hear any complaints from me as I am a self-proclaimed Atmos fanboy.  I do wish there would have been more special features included, but can understand why there weren’t.  If you’re considering this release for your collection, I’d recommend grabbing it as it is a solid upgrade over the earlier released copies.  13 Hours: The Secret Soldiers of Benghazi will be released onto 4K UHD beginning June 11.