10 Cloverfield Lane is the latest science-fiction psychological thriller to hit the shelves. Directed by Dan Trachtenberg and starring Mary Elizabeth Winstead (Final Destination 3, The Thing (2011), and Scott Pilgrim VS The World), John Goodman (Monsters, Inc., The Big Lebowski, and Argo), and John Gallagher, Jr. (Short Term 12, Jonah Hex, and Pieces Of April); we are presented with the second film of the Cloverfield “franchise”.

Originally developed under the title of The Cellar, this film eventually turned into a successor to the 2008 film Cloverfield – although it has absolutely no tie in to its predecessor.

10 Cloverfield Lane is a movie that caught us all off guard with its unexpected announcement earlier this year, as this secret project has made people question whether or not the traditional approach for film announcement and developed should be changed and whether or not this specific approach would have actually worked. The marketing for 10 Cloverfield Lane was as effective as its predecessor, with a ton of buzz generating in the short couple of months between the first trailer and the film’s theatrical release. As you may remember, the original Cloverfield used online marketing and social media extremely effectively, even in 2008 when this type of marketing was brand new. 10 Cloverfield Lane was equally as revolutionary in its pre-release marketing, and both films are great models of how to turn a basic sci-fi movie into a must-see event.

While 10 Cloverfield Lane generated a ton of pre-release buzz with its surprise announcement, leaving social media going crazy for weeks. I found this movie to be ultimately disappointing. I can’t quite pinpoint exactly why I didn’t care for it because the story started out strong and it has a great cast. Sometimes, it is hard for a film to live up to its massive hype, and I think that I just expected so much from 10 Cloverfield Lane that there was simply no way it would meet my expectations. This is unfortunate, because I believe that people going into this without prior knowledge will really enjoy the film.

One of the aspects that I wasn’t too keen on with this film was the camera work. While it did have some shots that were absolutely phenomenal, for the most part, it annoyed me to no end. Without being too revealing, the end of the film made it take a really obnoxious turn. Shaky cam is not my friend; your experiences may be better.

As for the one huge positive (not a fat joke; please don’t kill me John), John Goodman’s acting in this film was absolutely amazing (of course it was, this guy is great!). After watching this film, if there’s one thing you take away from it, you should definitely have learned to not piss John Goodman off, because that guy is crazy and will really fuck you up. He really was the best part of the film and truly carried it along. Without Goodman’s performance, this film probably falls flat. Between his massive size and his creepy-level turned up to “10”, you really feel as if you are trapped down in the bunker as well. He commands the screen and demands that you pay attention; just don’t apologize if you miss a scene. He doesn’t like that.

The overall visual presentation of 10 Cloverfield Lane was absolutely gorgeous. This film’s visual display was crisp, clear and generally well defined. Even in the 1080p resolution, you are able to clearly make out the pores on Mary Elizabeth Winstead’s face. There were a couple of parts that visually stood out the most to me, and they were those involving any sort of blood. While in cinema it’s predominantly fake blood, it most certainly looked like it was real and the wounds that were affiliated with them were over-the-top believable. Without spoiling anything, the final act was extremely impressive from a visual standpoint. These specific scenes were absolutely beautiful and definitely kept my attention as I watched them unfold on my screen.

Surprisingly enough (I say that because I’ve only really looked at my 4K UHD titles in detail since I started writing here) this Blu-ray release comes with a Dolby Atmos track that sounds fantastic! With the utilization of this technology, the audio of this film was indescribable. Being able to not only hear everything around me, but to hear the parts of the film that were occurring above me  as well (Atmos uses technology that supports overhead speakers) on a standard Blu-ray release was a great experience. After this experience, I’m going to have to re-visit some of my earlier Blu-ray purchases as it now has me questioning as to whether or not I have anymore Blu-ray releases that feature the Dolby Atmos technology. I know that it has become the standard on most UHD titles, but if you have a Blu-ray title with this Atmos technology included, you are certainly in for an auditory treat.

10 Cloverfield Lane comes with one of the most original Blu-ray packages of the year. This feature film includes a slipcover with its original pressing, but it is cut about three-quarters of the way up on the front side, with a full back cover. The custom slipcover is actually very cool, as it allows for the film’s main characters to take center stage, but under the slipcover, there is still the original poster artwork. The slipcover also lines up nicely on the cut with the artwork underneath, creating a cool effect, as if the slipcover is below the ground in the bunker itself.

This release includes the following items: 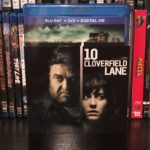 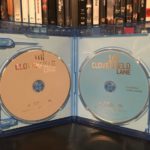 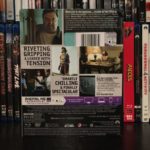 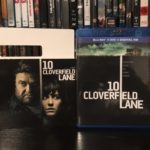 And for those steelbook collectors out there, Best Buy is offering a store-exclusive Steelbook. Of course we are all familiar with the variety of shopping experiences of Best Buy Steelbooks, but if you can manage to get your hands on one of these; it is certainly a beautiful release!

The special features for 10 Cloverfield Lane aren’t great, especially for a film with so much pre-release buzz. There is a single audio commentary with Producer J.J. Abrams, which is cool, but the featurettes included with the Blu-ray, although high in number, are low in content. They make up less than 30 minutes of content in total. The featurettes are as follows:

As I had previously stated, this film’s story started out really strong. The creepy undertone that was presented from the start with John Goodman’s character was great. However, as we approached the final sequences of the film, I felt that the plot had gone to a point of no return. If they would have kept moving with the dramatic quasi-horror theme that had made up 80% of the film up to that point, this would have been one of the best thrillers I had ever seen. It was when they introduced the final act and took a left turn in tone and plot that the film lost me. I would love to see a standalone film with John Goodman acting with the same creepy demeanor he had in this film. He was incredible.

If you’re into films that will keep you on the edge of your seat, always guessing at the next twist, then 10 Cloverfield Lane is definitely a must own. Personally speaking, I wish that I would’ve waited for this film to go on sale so I didn’t spend the normal $19.99 price tag that new releases have. As a technical release, I highly recommend this title for its audio/visual components, but I do feel as if there is a more perfect film buried somewhere in the bunker that never made it all the way out.